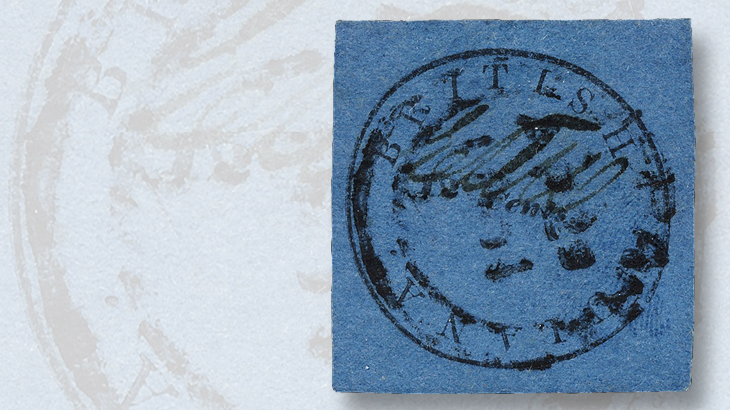 A 12¢ black-on-blue British Guiana Cottonreel stamp, ex-Louise Boyd Dale and called one of the finest extant, sold for $19,900 at the Gaertner auction during WSS-NY 2016. 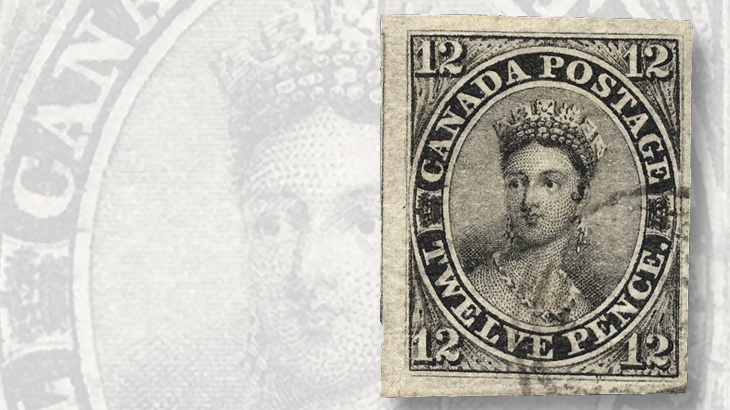 This example of Canada’s 1851 12-penny Queen Victoria on laid paper has good to huge margins and a trace of the adjacent stamp at left. It was sold at the Gaertner WSS-NY 2016 auction for $41,150. 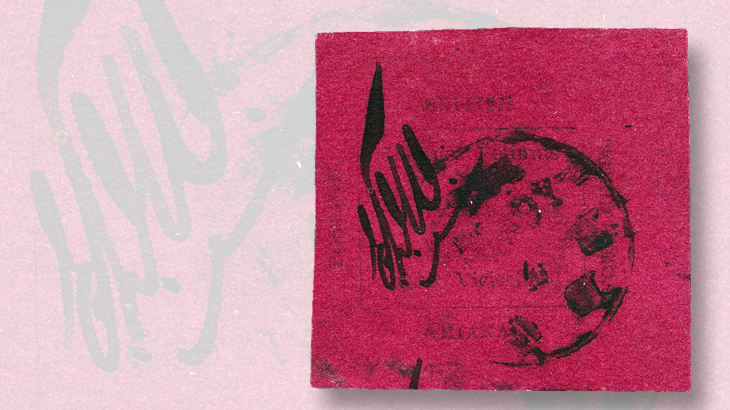 Also offered in the Gaertner auction at WSS-NY 2016, this British Guiana provisional 4¢ issue of 1856 with bold postmark and postal clerk’s initials sold for $15,100. 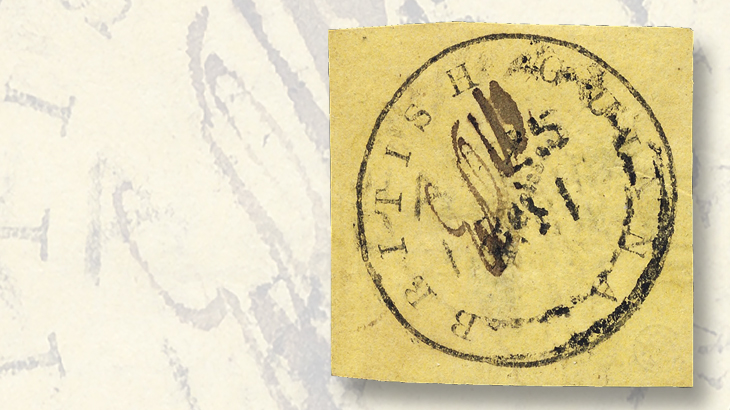 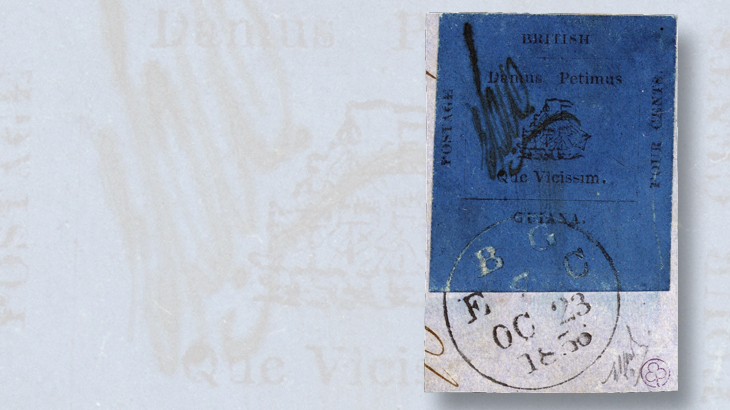 This striking example of the 4¢ black-on-blue provisional issue of British Guiana, 1856, formerly owned by Ferrary and Caspary, brought $75,500 at the Gaertner auction at WSS-NY 2016. 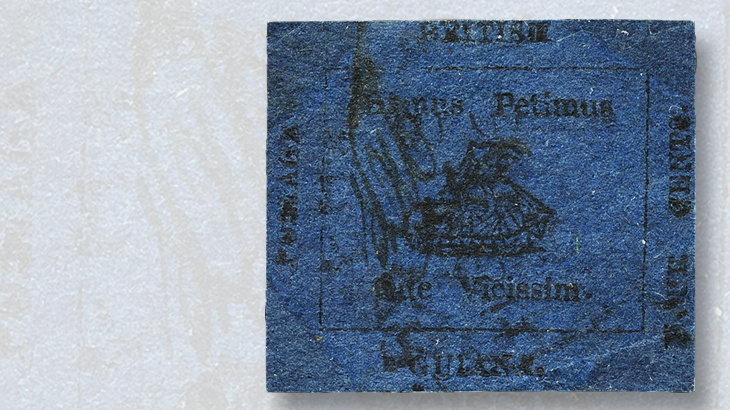 The top seller in the Christoph Gaertner auction at WSS-NY 2016 was this British Guiana 1856 provisional stamp, ex-Ferrary, and one of only nine on blue paper colored all the way through. It realized $130,400. 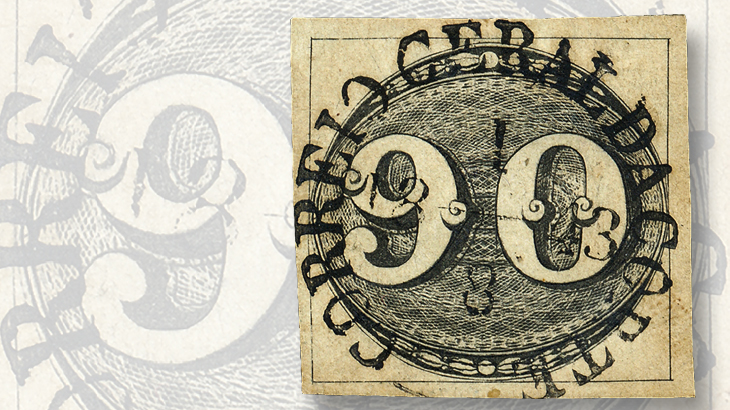 A superb example of Brazil’s first issue, this 1843 90-reis Bull’s Eye stamp with a socked-on-the-nose first-day cancel, one of only two known. Christoph Gaertner sold it for $39,100 at his WSS-NY 2016 auction.
Previous
Next

Gaertner’s full-day auction kicked off Monday morning, May 30, with more than 900 lots. By day’s end, some $5.74 million in results (including the firm’s buyer’s premium, typically 22 percent) had been chalked up.

The Americas, north and south, ran strongest. Among the highlights was a run of classic rarities from British Guiana, including several close cousins of the unique 1856 1¢ Magenta exhibited in the show’s Court of Honor, on loan from world-renowned shoe designer and philanthropist Stuart Weitzman, via the Smithsonian’s National Postal Museum.

The South American colony’s earliest postage stamps of 1850-1851 were crudely made in a local print shop. Their design was effected by bending a piece of wire into a rough circle and typesetting the words BRITISH GUIANA around the edge, with a denomination in the middle. Various colored papers were used.

These rudimentary stamps are known as the “Cottonreels,” because they resemble the labels on the ends of a spool of cotton thread. To prevent forgery, postal clerks initialed each one before use.

The 4¢ black-on-orange Cottonreel (Scott 2), cut square and initialed “EDW” with a faint Demerara postmark of April 25, 1851, once belonged in the famous collections of Philippe von Ferrary and Maurice Burrus. It sold for $28,100.

A 12¢ black-on-blue Cottonreel (Scott 5), described as one of the finest extant and formerly in the Louise Boyd Dale collection, went for $19,900.

When the colony briefly ran out of stamps in 1856, it again turned to a local newspaper printer for some provisional replacements, giving rise to several varieties of a 4¢ stamp, as well as the legendary 1¢, of which only a single example has survived.

These provisionals, which feature the words BRITISH GUIANA POSTAGE and the denomination around a vignette of a sailing ship and the colony’s Latin motto, “Damus Petimus Que Vicissim” (We Give and Expect in Return), are known on either pink or blue paper.

A black-on-rose-carmine provisional 4¢ of 1856 (Scott 14a) in the Gaertner sale, cut square with large margins, has a shallow thin spot on the back but none of the surface rubbing that frequently mars these stamps; the bold postmark and “EDW” initials of the postal clerk overwhelm the faint stamp design. It sold for $15,100.

The 1856 provisionals on blue occur on paper either colored on one side only or all the way through, which is known as “sugar-bag” paper, presumably a reference to its common use. The latter is extremely scarce, with only nine examples known (compared to about 20 for the surface-colored paper).

Ferrary, who collected in an era when mere quantity was prized above quality or the building of any philatelic narrative, owned four of the nine examples on paper colored through.

A deep blue example, ex-Ferrary, originally cut octagonally (as was the custom; e.g., on the famed 1¢) but with its corners expertly rebuilt in matching blue paper at some time in the past, achieved the high result for the Gaertner sale, fetching an impressive $130,400.

From Brazil came a magnificent example of that country’s first issue, the classic Bull’s Eyes of 1843, consisting of a 90-reis stamp (Scott 3) with a socked-on-the-nose CORREIO GERAL DA CORTE postmark dated “1-8-43,” for Aug. 1, 1843, the first day of the stamps’ issue. There are only two first-day cancels known on this stamp. This one, called “a gem of Brazilian and American philately,” sold for $39,100.

Canada was represented in the Gaertner auction by not one but two examples of the famous 1851 12-penny Queen Victoria on laid paper (Scott 3), of which only 120 or so remain in existence.

The first one offered in the sale has good margins and is canceled with a bold “37” in four concentric circles. Its brief provenance goes back not much further than a pair of 1989 certificates and the consignor’s purchase of it in a 1995 auction. It went for $54,900. A second example, with good to huge margins (including a sliver of the neighboring stamp at left), lightly canceled with a trace of a crease, brought $41,150.