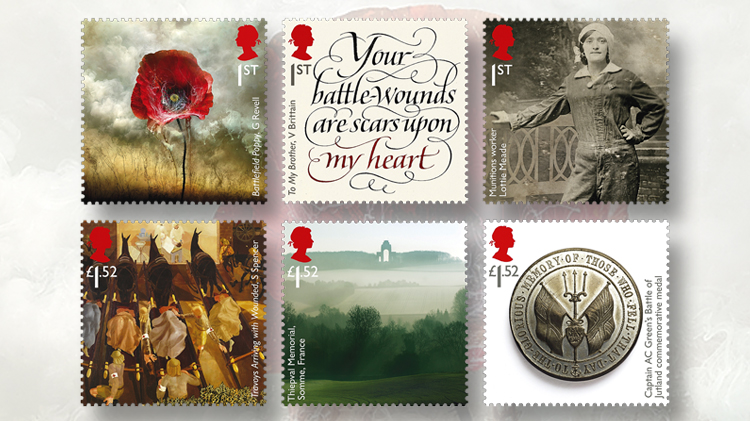 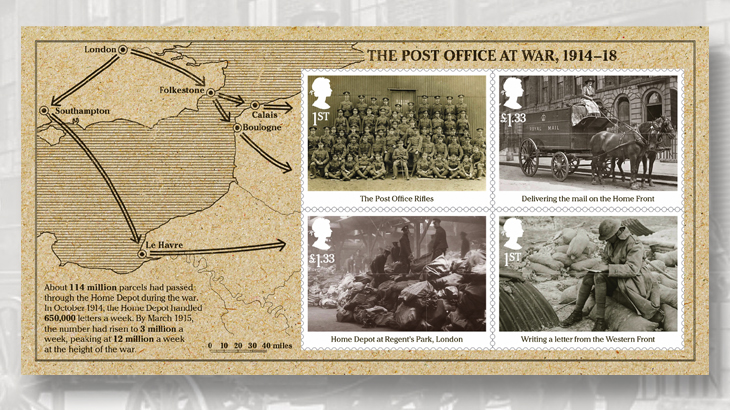 The souvenir sheet in the latest set in Great Britain’s World War I series represents some of the roles post office workers performed during the war, including serving in the Post Office Rifles battalion. 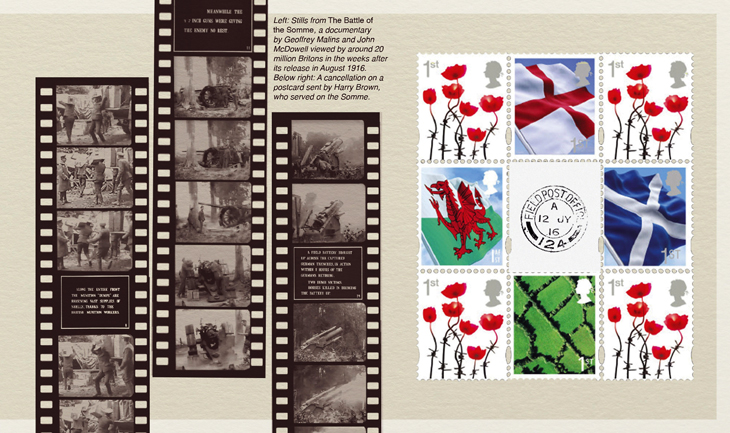 One of the four stamp panes in the prestige booklet includes eight se-tenant nondenominated first-class stamps showing poppies on barbed wire and designs from country stamps for England, Wales, Scotland, and Northern Ireland.
Previous
Next

On June 21, Great Britain’s Royal Mail issued the third set of stamps in its five-year World War I series.

In this series, Royal Mail is exploring each year of the war through stamps with the following six themes: poppies, poetry, portraits of participants, war art, memorials, and artifacts.

Six stamps in this year’s set are centered around events of the year 1916. Also issued were a souvenir sheet with the theme of the post office at war, and a prestige booklet with text, illustrations, and stamps.

Three of the six stamps are nondenominated with the “1st” inscription indicating that they pay the first-class rate (currently 64p).

The next stamp includes the first line from Vera Brittain’s poem To My Brother, “Your battle wounds are scars upon my heart.”

Brittain, who is known for her WWI memoir Testament of Youth, published in 1933, served as a nurse during the war.

Written in 1918, the poem To My Brother was about her brother Edward’s bravery in the Battle of the Somme. Edward was killed just a few days after the poem was written.

The third stamp pictures Charlotte “Lottie” Meade, a munitions worker during the war. The image is from a studio portrait of Meade posing in her work overalls and head scarf. She died in October 1916 from TNT poisoning contracted while working in the factory.

The other three stamps are denominated £1.52 to pay the rate for letters to Europe weighing more than 100 grams.

The stamp representing war art reproduces Travoys Arriving with Wounded at a Dressing-Station at Smol, Macedonia, September 1916 by Stanley Spencer.

Commissioned by the British War Memorials Committee of the Ministry of Information in 1918 and painted in 1919, the work is based on Spencer’s experiences with the 68th Field Ambulance of the Royal Army Medical Corps.

The description of the painting on the website of the Imperial War Museums says in part: “Spencer saw the wounded in religious terms: the dead and injured figures on the stretchers like Christs on the Cross and the Resurrection through the lifesaving efforts of the surgeons operating in the makeshift theatre. In 1938, Spencer wrote of the work, ‘I meant it not a scene of horror but a scene of redemption.’ “

The war memorial shown on this year’s stamp set is the Thiepval Memorial to the Missing of the Somme.

The commission’s website says: “The Thiepval Memorial, the Memorial to the Missing of the Somme, bears the names of more than 72,000 officers and men of the United Kingdom and South African forces who died in the Somme sector before 20 March 1918 and have no known grave.

“Over 90 percent of those commemorated died between July and November 1916.

“The memorial also serves as an Anglo-French Battle Memorial in recognition of the joint nature of the 1916 offensive and a small cemetery containing equal numbers of Commonwealth and French graves lies at the foot of the memorial.”

The final stamp depicts a commemorative medal for the Battle of Jutland, a naval battle fought from May 31-June 1, 1916, in the North Sea off the coast of Denmark.

This unofficial medal shows a trident between a crossed naval ensign and a Union flag and also includes the date “31 May 1916,” and the inscription “TO.THE.GLORIOUS.MEMORY.OF.THOSE.WHO.FELL.THAT.DAY.”

According to the Imperial War Museums, these medals were “produced by Spink and Son after a design by Admiral Prince Louis of Battenberg, 1st Marquess of Milford Haven, and sold for the benefit of naval orphanages.“

The medal pictured on the stamp belonged to Capt. A.C. Green.

The firm Hat Trick Design designed these six stamps, using material from a variety of sources, including the literary executors for the estate of Vera Brittain, the Imperial War Museums, the Mary Evans picture library, and the Royal Marines Museum.

The calligraphy on the Poetry stamp is by John Stevens, and the photograph on the Thiepval Memorial stamp by Mike Shell.

The stamps are square, measuring 35 millimeters by 35mm and perforated gauge 14.5. International Security Printers printed the stamps by offset in six sheets of 50, sold in panes of 25 at most postal outlets.

The first of the four se-tenant (side-by-side) stamps reproduces a 1916 photo postcard of the Post Office Rifles.

Formed in 1868, this battalion of the British Army comprised of postal staff is best remembered for its service on the Western Front in World War I, according to the website of the Postal Museum.

The Post Office Rifles stamp is a nondenominated first-class stamp, as is the stamp in the lower-right corner of the sheet picturing a photograph of a solder writing a letter from the Western Front.

The other two stamps are denominated £1.33 to pay the rate for international mail up to 20 grams. One shows the delivering of mail on the home front by a horse-drawn Royal Mail vehicle, and the other depicts bags of mail at the home depot in Regent’s Park, London. The General Post Office built this sorting office to handle mail from the troops.

The inscription below the map pictured in the selvage reads: “About 114 million parcels had passed through the Home Depot during the war. In October 1914, the Home Depot handled 650,000 letters a week. By March 1915, the number had risen to 3 million a week, peaking at 12 million a week at the height of the war.”

The source material for the postcards and photographs shown on the stamps came from the Postal Museum, Imperial War Museums, and the National Library of Scotland.

Another pane contains the four se-tenant stamps from the souvenir sheet with a field post office postcard shown in the selvage.

The three nondenominated first-class stamps from the set of six are se-tenant on one pane in the booklet, and the three £1.52 stamps on another pane.

Royal Mail’s other products for this WWI set include first-day covers, a presentation pack with mint examples of the stamps and text by Imperial War Museums historian Ian Kikuchi, and 11 postcards reproducing the designs of the 10 stamps and the souvenir sheet.