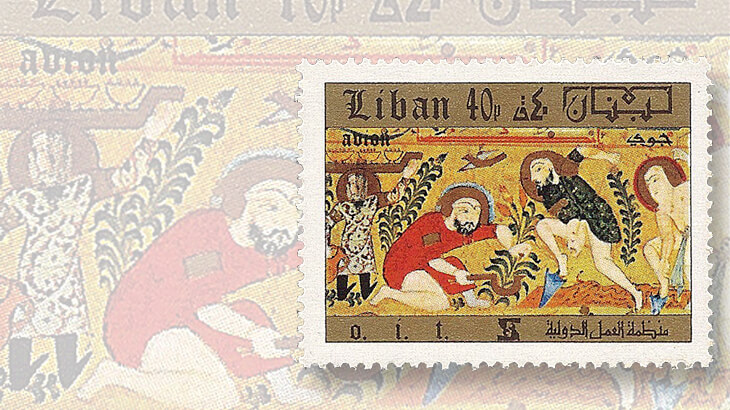 The 40-piaster airmail stamp in Lebanon’s 1971 International Labor Organization issue shares the same design as the 10pi stamp. This design is based on a 12th-century Arabic painting featuring agricultural workers. 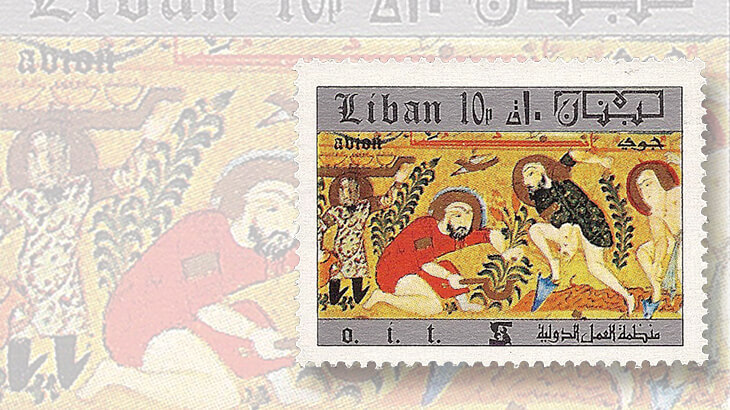 In 1971, Lebanon issued a set of two airmail stamps honoring the International Labor Organization. The low denomination is 10 piasters.
Previous
Next

The International Labor Organization describes itself as bringing “together governments, employers and workers representatives of 187 member states.” One of these member states is Lebanon, which joined in 1948.

Founded in 1919, the ILO celebrated its 50th anniversary in 1969. On Feb. 1, 1971, the Lebanese Directorate General of the Posts issued a set of two commemorative airmail stamps to honor the occasion. This issue reflects the work that the ILO has done for the advancement of the world’s workers.

The multicolored, rectangular stamps were designed by M. Gebara, and printed by heliogravure in Budapest, Hungary, on white unwatermarked paper. The quantity issued was 40,000 sets. The stamps are perforated gauge 12.

Both stamps share the same stunning main design, adopted from a 12th-century Arabic painting featuring agricultural workers. To me, the design looks like an ancient tapestry depiction of a time forgotten.

At upper left is the word “avion” with a similar word at upper right in Arabic. Both words are equivalent to the word “airmail.”

In the bottom panel, at left, is the French abbreviation “O.I.T.,” for Organisation Internationale du Travail, which stands for the International Labor Organization.

At right are the written words, International Labor Organization, in Arabic. These two inscriptions are separated by two hands, each carrying a wrench.

The story of the ILO started in 1919, when it was created as part of the Treaty of Versailles. It became  an agency of the United Nations in 1946.

The ILO deals with labor laws and standards, labor issues, and social protection for workers, as well as with employment opportunities for all workers. Also, it accepts complaints against companies that are not in compliance with international rules. However, the ILO does not have the power to impose sanctions or fines against governments.

In 1969, the ILO received the Nobel Peace Prize for “improving peace among classes, pursuing decent work and justice for workers, and providing technical assistance to other developing nations.”

As a young stamp collector, I owned this set in blocks of four. I found it to be so rich in color and beautiful to look at that it had a special place in my album.

Looking at this set today reminds me of my childhood. These stamps are really a piece of art.