Letter from sailor killed at Pearl Harbor sells for $1,750 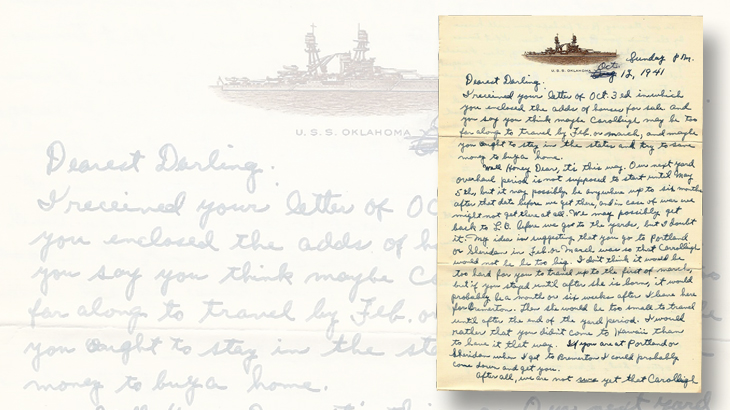 Navy Petty Officer Porter Rich wrote a tender, loving letter to his wife, Margaret, Oct. 12, 1941. Rich, who died in the attack on Pearl Harbor less than two months later, sent the letter the next day from the USS Oklahoma, where he was stationed. Shown i 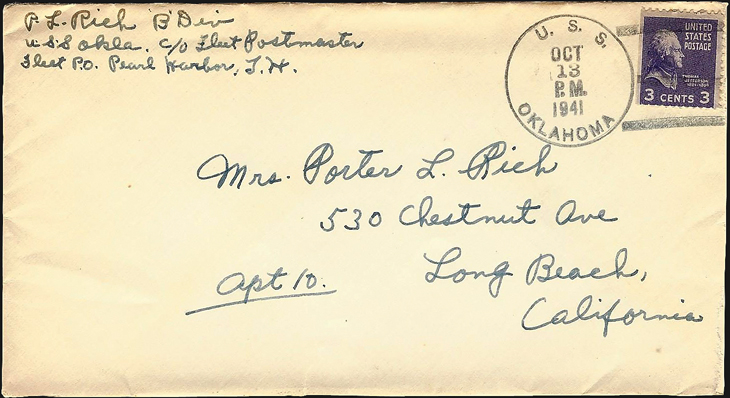 An experienced collector of Pearl Harbor postal history paid $1,750 in an online auction for this cover sent less than two months before the Japanese attack. The sender, stationed aboard the USS Oklahoma, was killed in action during the attack Dec. 7, 194
Previous
Next

Porter Rich, a petty officer in the United States Navy assigned to the USS Oklahoma, was killed in action at Pearl Harbor, Hawaii, Dec. 7, 1941.

Slightly less than two months before that fateful morning, Rich penned a loving, tender letter to his wife Margaret. It might be the last letter he wrote to her before his death.

Both the letter and the envelope that carried it survived and eventually found their way into the stock of military postal historian and dealer Kurt Stauffer, who sold them on eBay Jan. 2 for $1,750.

Pictured nearby is the cover, postmarked Oct. 13, 1941, aboard the Oklahoma, which was stationed in Pearl Harbor at the time. Note the “T.H.” in the last line of Rich’s return address, which stands for Territory of Hawaii.

Rich used USS Oklahoma stationery, as can be seen by the print of the battleship at the top of the page.

Although the cover has a connection to the Japanese attack on Pearl Harbor, I was surprised at the final realization. So I reached out to Stauffer for some additional insights.

He told me that he acquired the cover “and a few others” from a San Diego antique dealer.

“He knows of my interest in Pearl Harbor postal history and offered them to me,” Stauffer said.

When the auction closed, Stauffer also was surprised at the result.

“I had sold a couple of covers from the same correspondence a year ago for between $200-$300 each, but this one took me off guard,” he recalled.

“There was a tremendous amount of interest in it. The cover was dated closer to the attack than the others I had sold, which added to the interest.

“The ship’s letterhead on the stationery was also one of the reasons it piqued bidders’ interest. There were 35 total bids, with four bidders each bidding over $1,000.”

Another factor that likely pushed up the final realization, according to Stauffer, was recent news coverage of attempts to identify the remains of those stationed aboard the USS Oklahoma who were killed during the attack.

“For many years, the general public only seemed to know about the USS Arizona. With the recent events surrounding the identification of the remains of the unknowns, I think people are more aware of the history of the Oklahoma, and the bidding reflected it,” Stauffer said.

Stauffer’s observations confirm yet again that knowledgeable collectors seek items for their collections that tell a fascinating story.

And he knows of what he speaks: He is a seasoned collector himself, with interests in Pearl Harbor postal history, prisoner of war mail, and postal history associated with the Sept. 2, 1945, surrender of the Japanese in Tokyo Bay.

To provide additional perspective, Stauffer helped me contact Jeff Omdahl of California, a collector of Pearl Harbor postal history who was the winning bidder on the USS Oklahoma cover.

After selling that collection, Omdahl set his sights on collecting covers from the ships at Pearl Harbor on Dec. 7, 1941. To make the pursuit worthwhile, he focused on covers bearing the work of famed cachetmaker Walter G. Crosby.

“This is proving to be more difficult than I thought but I am enjoying the chase,” Omdahl said.

“I was impressed as a youth about the story of Pearl Harbor, and my father would take us to the [USS Arizona] memorial as kids. Since I had collected Hawaiian material for so long it was only natural to move into postal history as well.”

When Omdahl first saw the USS Oklahoma cover on eBay, he realized that he already had two letters from the same correspondence. Intrigued, he started to do some research.

“What caught my attention was this letter was now addressed to Mrs. Porter Rich and the previous two letters were addressed to Miss Margaret Lehmkuhl,” Omdahl explained.

“After putting the pieces together and reading Porter’s profile, I realized that Margaret had gone through her divorce as outlined in the Jan. 18 letter, and sometime between the end of January and September 1941 they got married and went on their honeymoon.

“My guess is Margaret never saw her new husband again after his return to his ship in September because he was killed at Pearl Harbor on Dec. 7, 1941.

“I will be on the lookout for any correspondence that might have occurred between Porter and his new bride from September until his death on Dec. 7.”

Given this historical backdrop, Omdahl was prepared to pay more to secure the cover for his collection because it “tied my two previous letters together and gave me a very small window into a life so long ago.”

The letter from Rich to his wife, datelined Oct. 12, 1941, is suffused with the joy and love of a young couple embarking on a new life together.

Illustrated here is the first page of the letter.

“I received your letter of Oct. 3 in which you enclosed the [advertisements] of houses for sale. And you say you think maybe Carolleigh may be too far along to travel by Feb. or March; and maybe you ought to stay in the states and try to save money to buy a home.”

Carolleigh apparently is the name of their unborn child. It’s probably a combination of Carol and Leigh because they wouldn’t have known the sex of the child ahead of time.

He goes on to discuss his schedule and that of the Oklahoma, which was due for an overhaul in May 1942.

He concludes his four-page missive by telling Margaret that he’s “written about all I can think of except to tell you how much I love you, adore you, miss you and cherish you.”

He signs off with: “Your Loving Husband Porter.”

What a life they might have had, had events gone differently on that fateful Sunday morning of Dec. 7, 1941.

For his part, Omdahl plans to build on his Pearl Harbor postal history, “with an eye on exhibiting in the future.”

This USS Oklahoma cover, perhaps the last that Porter Rich sent, would no doubt be a highlight of Omdahl’s exhibit.