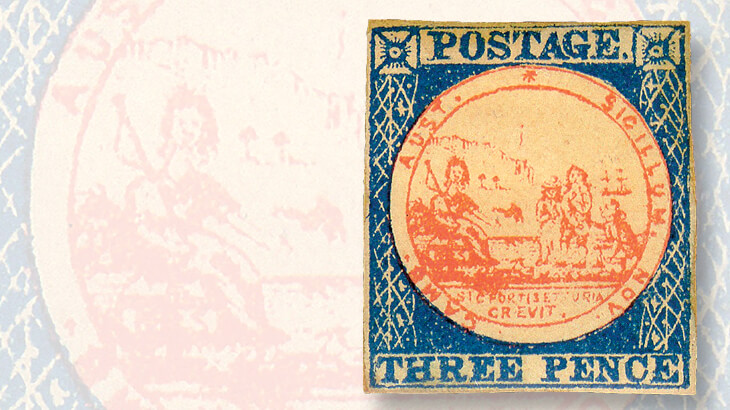 Robert Clayton’s first essays were bicolored and printed with two lithographic plates. This is one of his red and blue lithographed samples submitted and turned down by the board. 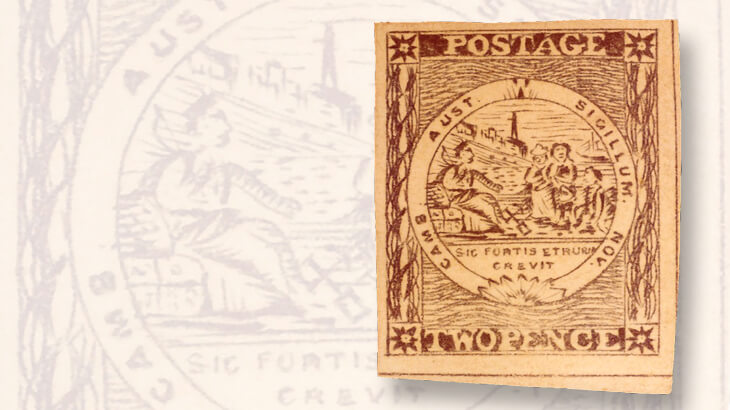 This unused 2-penny stamp was printed from plate II and shows the horizontal-lined background, date in the bale, shading in fan, and dot at the center of each corner star. 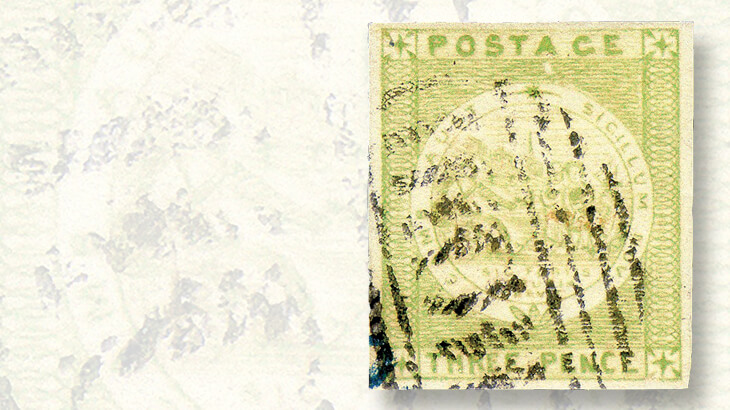 Only one plate was used to print the 3-penny stamps. This stamp was printed in yellow green on soft yellowish wove paper. 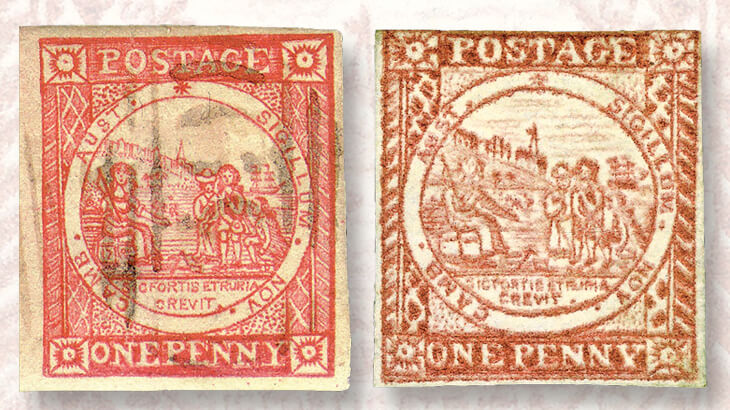 The most obvious difference between the plate I and plate II 1-penny stamps is that stamps from the first plate have no clouds in the sky, and stamps from the second plate show clouds.
Previous
Next

Limiting ourselves to “national” stamp issues — that is, excluding local issues — the Sydney Views stamps of New South Wales were arguably the first pictorial postage stamps of the world. The evidence is in the following list:

The colony of New South Wales was founded in January 1788. Eleven ships traveling together arrived from England, with 580 convicts, 250 soldiers and various seamen, mechanics and others on board.They disembarked at Port Jackson, and Capt. Arthur Phillip proclaimed the new colony. He subsequently became its first governor.

It was not until 1825 that a proper postal service was created.

An act titled “An Act to Regulate the Postage of Letters in New South Wales” established the basic parameters, including the appointment and remuneration of postmasters, and the basic tariff of 2 pence postage per letter.

The New South Wales Post Office had been and continued to be under the authority of the colonial government, not under the Imperial Post Office in London, as was the case in other colonial outposts.

Perhaps for this reason the principals of the post office showed considerable initiative and creativity.

In November 1838, for example, nearly two years before the issue of the Mulready envelopes and letter sheets in Great Britain, the postmaster general of New South Wales, James Raymond, introduced prepaid envelopes for use in Sydney and environs. They were denominated 2d and bore an embossed replica of the seal of the colony, but with the words “GENERAL POST OFFICE SYDNEY” in the outer ring.

Furthermore, to accommodate more customers, members of the general public were able to bring to the central post office other envelopes of their choice and obtain the official embossed seal, which, for all practical purposes, indicated postage paid.

These envelopes are arguably the first issued postal stationery in the world. In the post office accounts of 1848, it is indicated that 15,225 prepaid envelopes were sold, yielding £63.8.9.

It is also significant that the postage rate for a single-weight local letter had been reduced in 1841 from 2d to 1d.

It is clear that the interests of the public, and not the least those of local businesses, were foremost in the legislative affairs governing the post office’s regulations, rates, and routes. Legislation toward lowering rates and creating new and uniform rates of postage was passed on various occasions.

Already in 1835, according to legislation titled “An Act to Provide for the Conveyance and Postage of Letters,” the first weight step for letters was raised from ¼ ounce to ½ ounce, much to the advantage of the public. Newspapers were delivered free from postage, and that was a huge burden for the post office.

In December 1848 another law passed, amending the previous, which, in order to increase the post office’s revenue, reduced postage rates once again. Newspapers remained free from postage. Further reforms were passed in an act of Sept. 15, 1849, titled “An Act to Establish An Uniform Rate of Postage and to Consolidate and Amend the Law for the Conveyance and Postage of Letters.” Thus distance charges were eliminated, the abolition of various free-franking privileges acquired by special interests was signed into law, and various other matters.

The success of postal reform in Great Britain was not lost on the citizens of remote New South Wales. It was decreed that local postage would still be 1d, internal letters would pay 2d, and the internal postage payable on ship letters would be 3d. In other words, postal reform had arrived in various legislative stages following each other in fairly rapid succession.

Among other matters, the act of 1849 instructed the postmaster general to make all necessary preparations for the issuance of postage stamps, which, it was explained, would greatly enhance the efficiency of routines and procedures of the post office in numerous ways. Postmaster General James Raymond went to work on the new program with characteristic energy.

Legislation had specified that stamps would go on sale on Jan. 1, 1850.

It is interesting to see this list. Kay, Clayton and Jervis, and a fourth person named John Carmichael who was not on this list, would eventually occupy the four major roles in the design, engraving and printing of the early postage stamps of New South Wales.

Robert Clayton had his chance a few months earlier, having received a commission from the post office to produce the first postage stamps. He submitted some of his work, but it was disapproved by the board constituted by the colonial secretary for the purpose of overseeing the printing of postage stamps.

Clayton’s first essays were bicolored, printed with two lithographic plates. Pictured nearby is one of his red and blue lithographed samples submitted and turned down by the board. Clayton was probably placed on the list in case his skills would be needed later on, and they were indeed needed; a few days later he would engrave the plate for the first stamp.

Regarding Charles Kay, Raymond wrote to the colonial secretary: “I am led to believe that the individual named [Charles Kay], whose offer is the lowest, is an eligible party to perform the work.” On the following day the official offer was relayed to Kay: “I have received the Sanction of His Excellency the Governor to accept your tender for printing and gumming the Postage Stamps required for this Department at the rate of three pounds fifteen shillings for every one thousand sheets containing 100 stamps each.”

An error had been made in mentioning 100 stamps in each sheet. Circumstances, mostly the very short period of time available, precluded the making of large plates.

Instead, plates were of 25 stamps, each image engraved separately on the copper sheet. Given the time pressure, the work was subdivided among the engravers available, as detailed in an invoice of Dec. 22, 1849:

One penny. Robert Clayton furnished a Copper Plate containing 25 engravings of the Penny Postage Stamp. His invoice for this is 10 pounds.

Two pence. John Carmichael furnished a Copper Plate containing 25 engravings of the Twopenny Postage Stamp. His invoice for this is Twelve pounds and twelve shillings.

Three pence. H. C. Jervis furnished a Copper Plate containing 25 engravings of the Threepenny Postage Stamp. His invoice for this is seven pounds.

Amounting in all to Thirty-five pounds three shillings and ninepence.

Kay’s composite invoice was uncontested by the auditor general and was paid in full on Jan. 3, 1850, after the delivery of the first batch of stamps.

The design of these stamps is fascinating. It is derived from the seal of the colony. In the central vignette it shows allegorical “Industry” seated on a bale, and immigrant convicts being released from their fetters — broken chains lie on the ground (not always visible).

In the 1d design are oxen plowing, as if the immigrants were being pointed there; in the other two denomnations the oxen are not present. In the background is a hill with trees (not always present), with much housing and a church steeple. Beyond the hill is the ocean, with a two-mast sailing ship.

Industry holds a staff (some say whip) in her right hand, and at her feet are a pick and shovel, symbolic of work and of the mining industry. The bale is bundled and tied across, separating four quarters, which sometimes have legible inscriptions, including dates (i.e., 1788 in the 1d stamp). Below the vignette is the Latin inscription “SIC FORTIS ETRURIA CREVIT,” which in translation means: “Thus mighty Etruria grew.” The vignette is bounded by a double ring, and between the rings is the inscription “SIGILLUM. NOV. CAMB. AUST.,” which, in abbreviated form, is Latin for “Seal of New Cambria (Wales) Australia.”

This was not a simple heraldic allegory; it was a miniature picture that told a huge story. It was the story of a new and hopeful beginning.

Copper plates wear fast. After the initial printings, which continued to meet requirements for six months, engravers decided it was time to make new plates. Thus in July-August 1850 a re-engraved plate of the 1d was made by Henry C. Jervis. The most obvious difference between plate I and plate II stamps is that stamps from the first plate have no clouds in the sky, and stamps from the second plate show clouds. The 1d stamps shown are examples of “with clouds” and “without clouds” stamps. Clayton was responsible for the first plate. Why he did not produce the next plate is not known.

Of all the Sydney Views, the finest and most perfect engraving was that by John Carmichael of the first plate of the 2d stamp.

I have had examples from early impressions that defy description; they can be simply stunning. Of course, the 2d stamp was the most utilized as it paid the rate for a single-weight internal letter. More stamps were printed, and work on re-engraving the plates was undertaken four times. There were five plates, the last four being re-engravings of the first.

In plate I, by Carmichael, the background lines are vertical.

In plate II, re-engraved by Jervis, the background lines are horizontal, and the bale is dated.

In plate III, once again re-engraved by Jervis, the bale is single-lined, not dated.

In plate IV, re-engraved a third time by Jervis, the bale is double-lined, and there is a circle in the center of each star.

In plate V, re-engraved a fourth time by Jervis, there is a pearl at the bottom of the fan.

The unused 2d stamp pictured here was printed from plate II and shows the horizontal-lined background, date in the bale, shading in fan, and dot at the center of each corner star.

The printing of the 3d Sydney Views stamps required only one plate. There are four colors listed in the catalogs, and three distinct types of paper. Shown nearby is a 3d stamp in yellow green on soft yellowish wove paper.

It remains to be said that considering there were eight plates of 25 distinguishable stamps in each, there are 200 different stamps to amuse the persistent and avid collector. With a finer classification, which takes into account types of paper, principal shades and principal states of wear of the various plates, there are 1,125 different stamps needed to form a complete collection.

Very deep pockets and a lifetime of searching may not be enough. In a second installment of this account, I will describe some of the most interesting varieties, the papers, the colors of the Sydney Views, and the all-important cancellations found on these magnificent stamps, the first to appear in the Australian theater.

The history behind British Guiana’s Cottonreels