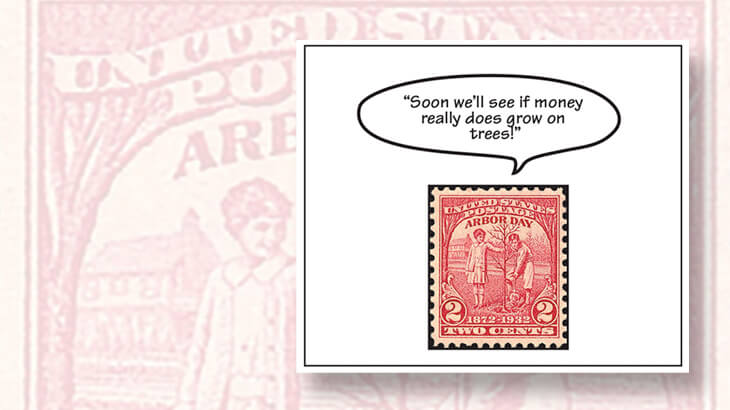 The May cartoon caption contest featured the 1932 2¢ Arbor Day commemorative showing a brother and sister planting a tree. Marci Jarvis of Fairfield, Calif., wins the nonphilatelic part of the contest with this fanciful line. The next cartoon caption cont

There certainly are some practitioners of dark humor among Linn’s readers.

The most popular approach to the May cartoon caption contest featuring the 1932 2¢ Arbor Day stamp is typified by this entry from Michael Morrissey of Westerville, Ohio, “… there, Millicent, they’ll never find Uncle Fred’s body under this tree … now his stamp collection is OURS, ALL OURS!!!”

Perhaps more practical are the lines that ponder the future, such as this one sent in by Mildred and Doug Barylski: “Now, I just need to plant another tree eight feet away, wait five years, and hang up the hammock.”

Several readers saw the brother and sister in the design as an opportunity to substitute Charlie Brown and his sister Sally from the cartoon strip Peanuts. One of the best of these entries came from Edward Aginsky of Brooklyn, N.Y.: “Sally do you know what Arbor Day is? Yes, Charlie Brown, it’s when all the ships come into the arbor.”

The winner of the non-philatelic part of the contest comes from Marci Jarvis of Fairfield, Calif.

On the philatelic side of the contest, Sebastian Glentz of Sheboygan, Wis., won with “Only the Post Office could think that red is green!”

“I just dug up a 40-year-old time capsule, and found a set of mint Columbians,” by Mike Atselinos of Silver Spring, Md.

“Yes, Dad, I know which end goes in first,” from Robert Bialo of Cary, Ill.

“Yewre stamp collection is so poplar, and how yew must pine for it,” by Bob Klass and Katy Globus of Sacramento, Calif.

“Dad’ll be glad we got this big weed out of his garden,” from Ray Cartier of Arlington, Texas.

“Well, we finally got our very own post office branch,” by Steve Kotler of San Francisco, Calif.

“If money doesn’t grow on trees, maybe stamps will on this one!” by Elgin Sink of New Cumberland, Pa.

The next cartoon caption contest will be announced in the July 11 Linn’s.