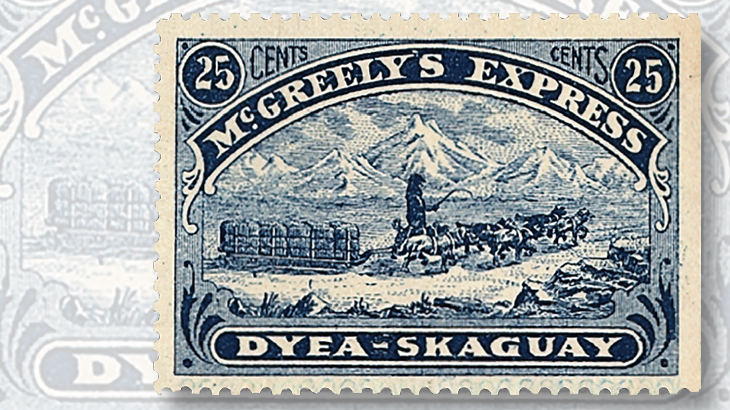 The 1898 McGreely’s Express Alaska 25¢ blue Dog Sled local post stamp (Scott 155L1) is in demand and is a good buy at the 2016 Scott Specialized Catalogue of United States Stamps and Covers value of $50.

Local stamps remain one of the more active segments of the U.S. stamp market. These stamps were issued by local posts for city delivery, independent mail routes and services, and other private posts. The Act of 1861 gave the U.S. Post Office Department a near monopoly on the delivery of letter mail, and after that date most local post services were able to operate for just a short time before being forced out of business by the government.

There are a variety of ways to collect local post stamps. Some collectors specialize by geographical location of the local post. Many local post stamps have topical appeal. Most local post stamps are far more valuable used, especially on cover, than they are in unused condition. This is because after the companies were forced out of business, they often sold remaining stamp stocks to dealers as remainders.

We like the 1898 McGreely’s Express Alaska 25¢ blue Dog Sled local post stamp (Scott 155L1). This stamp is known only in unused condition and is valued at $50 in the 2016 Scott Specialized Catalogue of United States Stamps and Covers.

A note following the listing says, “The status of No. 155L1 is questioned,” which means that some authorities question whether the company that produced the stamp ever used it to deliver mail. That does not seem to have hurt the stamp’s desirability. Both its place of origin in Alaska and the subject of its design make it popular with a wide variety of collectors. We think it is a very good buy at the Scott U.S. Specialized catalog value.