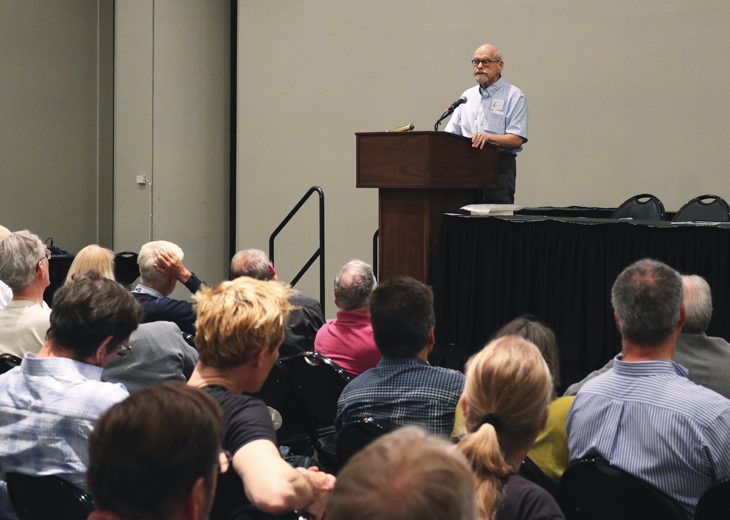 Lawrence Block, creator of the fictional hit man and stamp collector Keller, gave a talk titled “A Hit Man and His Stamps” May 31 at World Stamp Show-NY 2016.

Lawrence Block, a grand master of Mystery Writers of America, spoke to a large and appreciative audience May 31 at World Stamp Show-NY 2016.

The title of his talk was “A Hit Man and His Stamps.”

In a handout given to each attendee, Block wrote, “It’s a pleasure for me to be able to spend a little time talking with you about Keller, who has a robust following in the philatelic community.”

Keller is the fictional hit man in the title of Block’s talk. He’s a contract killer, and he’s also a stamp collector.

Block has now published five novels about Keller. In order of publication, they are Hit Man, Hit List, Hit Parade, Hit and Run, and Hit Me.

Keller is also featured in Keller’s Fedora, which Block refers to as a novella, a new book just released in e-book format, and planned for print publication “sometime after the first of the year.” Amazon offers it now as a Kindle download.

In the new story, Keller takes a train trip from his home in New Orleans to Chicago, where his latest assignment forces him to turn detective to figure out exactly whose number is about to be up. The novella has some terrific plot twists and turns, and also some adult language and themes that move the plot along.

Though the philatelic content is perhaps less pervasive in Keller’s Fedora than it is in the five novels, there’s still plenty in there, including a reference to Linn’s Stamp News, for which Block once wrote a monthly column.

Block, like his popular hit man, is also a collector, and in his talk he drew some parallels between his own collecting interests and Keller’s.

“I was collecting as an adult until my first marriage ended,” Block said, “and one of the casualties of it was that I sold my stamp collection. That was quite a few years ago, I reckon, and then, sometime in the early to mid 90s, I began collecting again, and this time around I tried to figure out what I wanted to collect, and wound up collecting worldwide, 1840 to 1940.

“Coincidentally, Keller made the same decision,” he said as the audience burst into laughter. “I mean, what are the odds?”

Keller fans are enjoying the new novella, and Block has done the stamp hobby a favor by making it the object of Keller’s passion.

“Every once in a while someone says, ‘There was an awful lot more in there about stamps than I really needed,’” Block told his audience. “On the other hand, there have been several people who’ve said, ‘You know what, I was wondering why there was all of that about stamps, and now, well, I’m collecting.’”