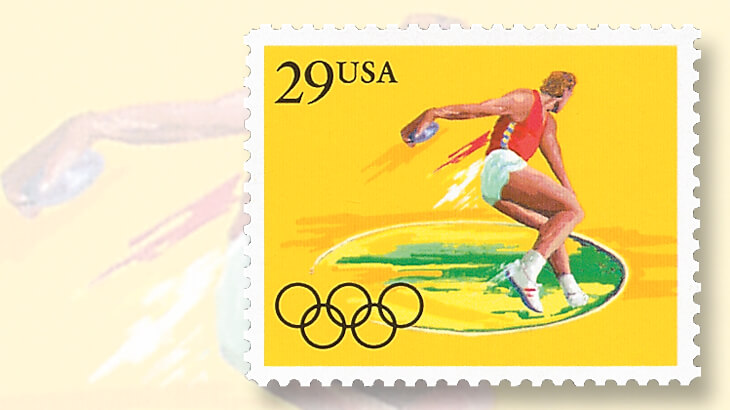 The cartoon caption contest stamp for July is the 1991 29¢ Discus stamp from the 1992 Summer Olympics set. Put yourself in the track suit, and tell me what the discus thrower might be saying or thinking. There will be a prize for the best philatelic and n

With the Summer Olympics in Brazil just around the corner, I have picked a stamp honoring the 1992 Summer Games as the cartoon caption contest stamp for July.

Although this particular stamp depicts a discus thrower, keep in mind that there will be more than 10,000 athletes from 206 national Olympic committees participating in the Summer Games in Rio de Janeiro, the first South American city to host the Olympics.

From the opening ceremonies on Aug. 5 through the closing on Aug. 21, these athletes will participate in 28 Olympic sports, with 306 events. Thirty-three of the venues will be in Rio, and an additional five will be in other Brazilian cities.

Madrid was the runner-up for these games, with Chicago and Tokyo also placing bids to be the host city.

The thrill of victory, and the agony of defeat will be featured on hours and hours of television during the Games, and the festivities might even put presidential politics into second place for much of August.

To be considered for the prizes, entries must reach me no later than July 22.