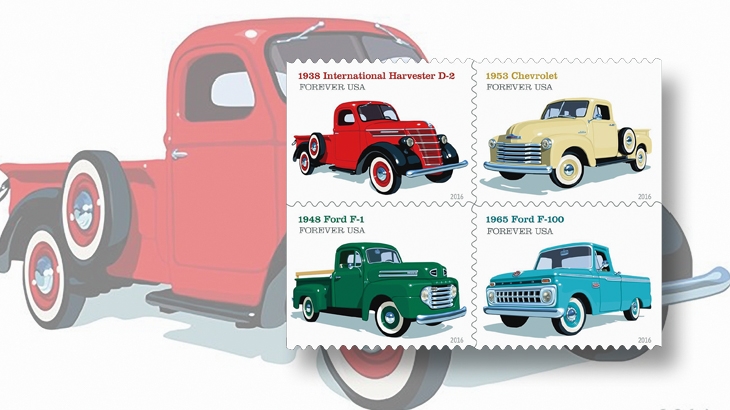 The stamps will be issued with a 1 p.m. first-day ceremony at the annual annual Syracuse Nationals classic car show, which runs July 15-17 at the New York State Fairgrounds, 581 State Fair Blvd. The ceremony is scheduled for the horticultural center.

"The strong, sturdy 1938 International Harvester D-2 had a distinct barrel-shaped grille and its elegant styling mirrored the look of luxury automobiles of the era. The 1953 Chevrolet, featured large windshields that provided drivers with excellent visibility, a distinctive curvy grille that bulged in the middle, and a six-cylinder engine. The 1948 Ford F-1 included features like the roomy 'Million Dollar Cab,' a sharp horizontal five-bar grille, and a six- or eight-cylinder engine. The 1965 Ford F-100 had a new grille that featured 18 small rectangular openings. It also featured what Ford dubbed 'Twin-I-Beam' independent front suspension."

The stamps will be issued in a double-sided pane of 20, which the Postal Service refers to as a booklet.