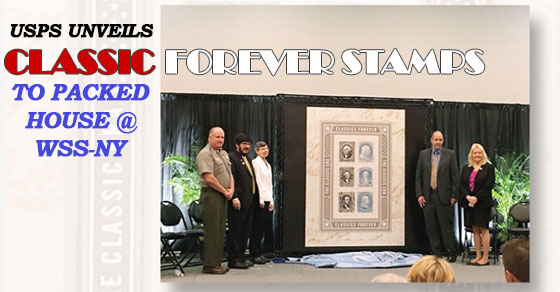 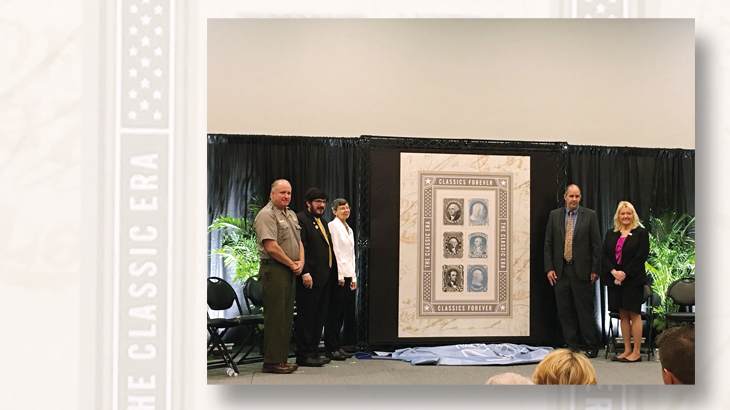 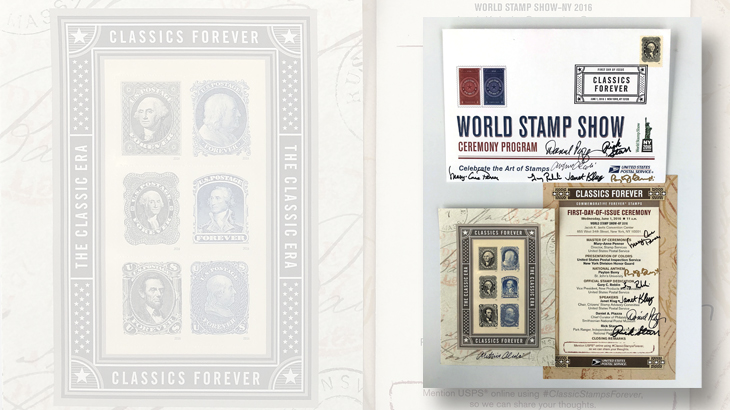 Following the conclusion of the ceremony, author Wayne Chen obtained a Classics Forever souvenir sheet, ceremony program and envelope, which he then had autographed by the dedicating officials shown in the first picture. Photo by Wayne Chen.
Previous
Next

On June 1, the fifth day of World Stamp Show-NY 2016, the United States Postal Service issued its Classics Forever stamps during a first-day ceremony.

The six stamps were issued in an attractive souvenir sheet with a decorative border containing the words “Classics Forever” and “The Classic Era” two times each.

Master of ceremonies Mary-Anne Penner, director of stamp services for the USPS, introduced each guest speaker. Following the presentation of the colors by the United States Postal Inspection Service, New York Division Honor Guard, and the singing of the national anthem by Payton Berry of St. John’s University, the ceremony commenced.

The dedicating official, Gary C. Reblin, vice president of new products and innovation at the USPS, addressed the audience of approximately 300 people. Reblin mentioned that these self-adhesive stamps are not only beautifully printed, but also feature water-soluble adhesive that makes removal from envelopes much easier. This new feature is highly appreciated by collectors, because many self-adhesive stamps are hard to remove from envelope paper after soaking.

Immediately after Reblin’s address, the new stamps were unveiled.

Lastly, Rick Starr, a park ranger for the National Park Service, spoke from a historian’s perspective on Benjamin Franklin and his significance. Starr described Franklin as an excellent postmaster.

After the ceremony, attendees lined up to acquire autographs from the speakers. Several USPS personnel helped to keep the long line of collectors in order, while limiting each person to two items for the signing.

Similar to previous WSS-NY 2016 first-day ceremonies, the Postal Service set up a framed picture of the Classics Forever souvenir sheet outside of the event hall for those interested in a photo opportunity.