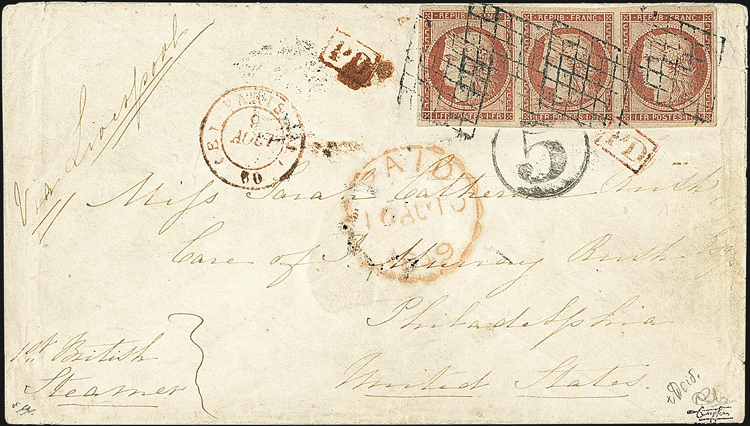 The high realization of the Siegel sale of the Walske collection at World Stamp Show-NY 2016 went to a letter, carried via Liverpool to Philadelphia, franked with a strip of three of the scarce dull vermilion shade of the 1-franc Ceres. One of five covers 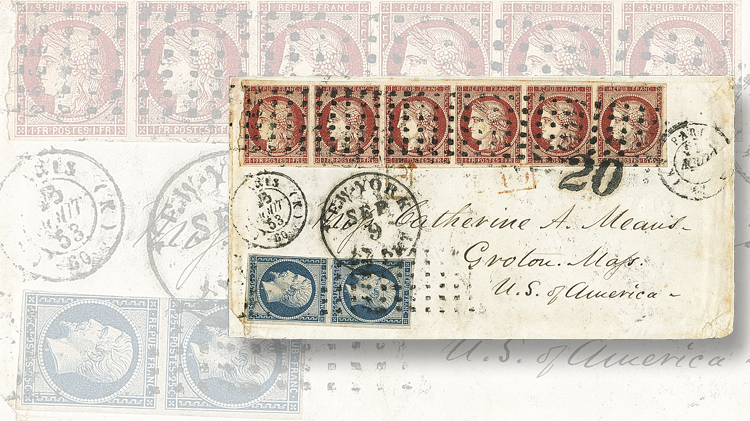 A highlight of Siegel’s May 29 World Stamp Show sale of the Steven Walske collection of trans-Atlantic mail between the United States and France was this 1853 cover franked with a strip of six of the 1-franc value from France’s first issue, the 1849 Ceres 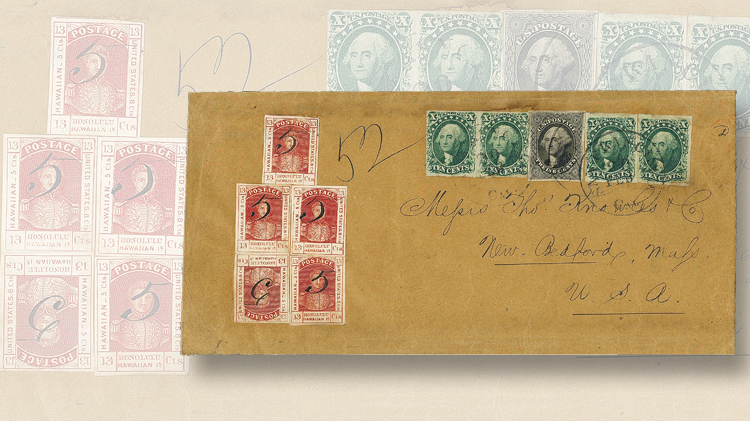 This fabulous cover from the William H. Gross Hawaii collection, bearing a remarkable five examples of a provisional “5” manuscript surcharge on the 13¢ King Kamehameha III issue, sold for $253,000 at the May 29 Siegel auction at World Stamp Show-NY 2016. 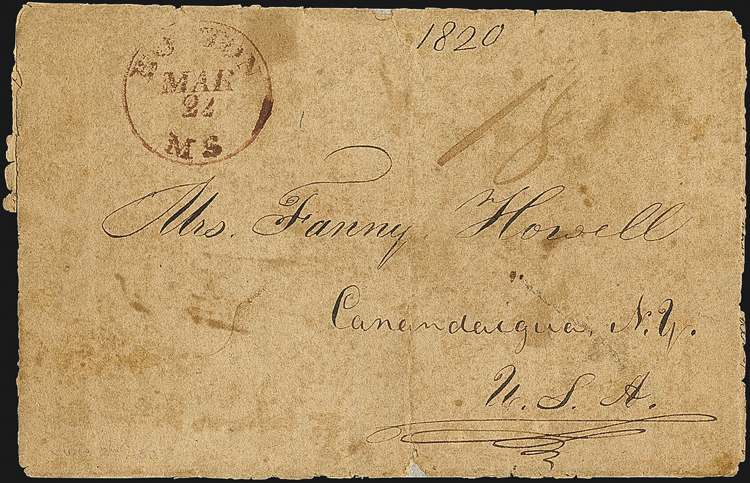 This 1820 cover, thought to have been the first letter to arrive back in the United States from missionaries in what were then called the Sandwich Islands, sold for $29,900 during the May 29 Siegel sale of William H. Gross’ Hawaii collection at World Stam
Previous
Next

The run of notable auctions taking place over six days at World Stamp Show–NY 2016 provide an opportunity for some lucky collectors to acquire sought-after gems.

Robert A. Siegel Auction Galleries was first out of the gate at 1 p.m. on Sunday, May 29, with William H. Gross’ exceptional Hawaii collection.

The sale included rarities from the earliest “Missionary” issues of 1851 up to rare provisional-government overprint errors of 1893.

The sale began with some choice items of the pre-stamp postal history, including an 1820 cover that was said to have been the first letter to arrive back in the United States from missionaries in what were then called the Sandwich Islands.

A two-page historical write-up in the hardcover sale catalog includes a painting of the sender, Sybil Bingham, by Samuel F.B. Morse and describes how the letter was carried by ship to Canton, China, and then on to Boston, arriving in 1821. It also quoted lengthy passages in which the writer described her new island home. The letter was estimated at $20,000 to $30,000.

Hawaii’s first stamp issue of 1851, known as the “Missionary” issue, was well represented in Gross’s collection by both unused and on-cover examples.

The finest known unused 13¢, inscribed “Hawaiian Postage” (Scott 3), went for $71,875. A glorious cover bearing this stamp, known as the “Eliza Johnson” cover for its addressee, was the first item in the sale to break six figures, selling for $115,000.

Numerous additional covers all sold for well into five figures.

The mixed franking paid the quintuple rate for postage from the islands to California and thence to Massachusetts, plus a 2¢ ship captain’s fee.

At 3 p.m., Siegel offered the second part of the Steven Walske collection of trans-Atlantic mail between the United States and France, focusing on French mail.

Three generations of the well-known Behr family of Parisian stamp dealers and auctioneers were seated in one of the front rows, and their paddle went up frequently as Siegel president Scott Trepel called the sale.

Highlights of the sale included a magnificent 1853 cover sent from Paris to Groton, Mass., via New York, franked with a strip of six of the 1-franc value from France’s first issue, the Ceres design of 1849, in a special shade of cherry-red known as cerise (variety of Scott 9). Completing the franking was a pair of 25-centime President Louis Napoleon stamps (11).

The cerise shade of the 1fr has only been recorded as having been used in Paris during August of 1853.

Adding to the cover’s interest is the fact that it left France as a quintuple-rate letter, but on reaching the U.S. was assessed for American postage at a quadruple rate, owing to the different systems of weights and measures in each country. This is indicated by the large “20” stamped on the cover, meaning 20¢ was due; letters could not be fully prepaid by their senders at that time, so each country collected its share of the postage.

The high realization of the sale went to a letter, carried via Liverpool to Philadelphia, franked with a strip of three of the scarce dull vermilion shade of the 1fr Ceres (variety of Scott 8).

Only five covers sent outside France survive with this shade, and only one to the United States. Additionally, it is the second-largest multiple of this shade known on cover. Called “the highlight of the Walske collection,” it sold for $97,750.