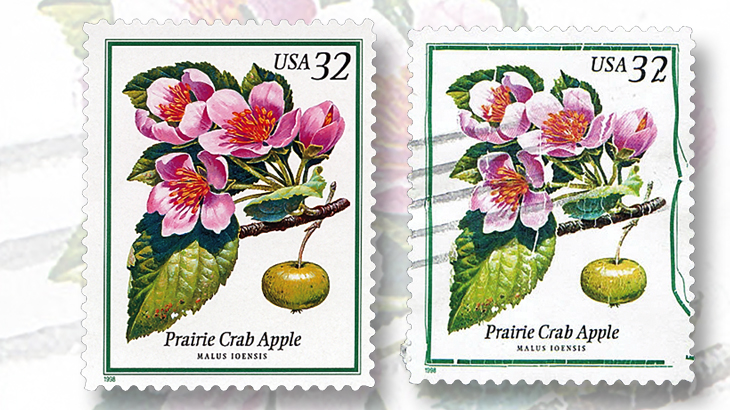 The used variety of the Prairie Crab Apple stamp at right differs markedly from the normal mint example at left. What happened to cause this phenomenon? 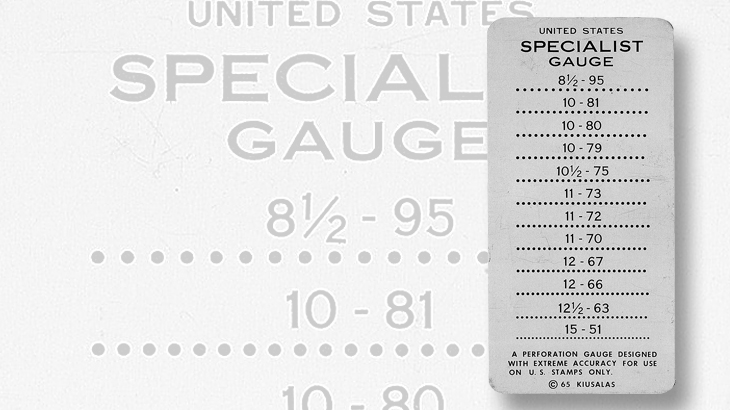 This specialist perforation gauge was invented by Richard Kiusalas in the mid-1960s. It is a useful tool for the expertizer of United States stamps because it measures in tenths of an inch, and provides more precise measurements than the standard perforat
Previous
Next

You can’t assume that you will get the information you want when you ask for an expertizing certificate. You need to ask for specifics. A recent reader inquiry highlights this problem:

“Is there any expertizing service that uses the Kiusalas specialized perforation gauge, and if they do, is there any such service that can give these measurements on a certificate if requested?”

This is a simple question, with an answer that has a bit of complexity.

First, you need to know that the Kiusalas Specialist Gauge (hereafter referred to as the K-gauge), copyrighted in 1965, was designed by Richard Kiusalas to measure more precisely all perforations that occurred on United States stamps up to that point.

The standard perforation gauge that we all use has a single measurement in half millimeters, representing the number of holes in a 20-millimeter space. Kiusalas developed a method that allowed measurement of the distance between the center of one perforation hole to the center of the next, in thousandths of an inch.

This recognizes that U.S. perforating equipment has always been constructed to specifications in fractions of an inch.

For example, a gauge 10 perforation on our usual gauge has three different K-gauge measurements, each tied to specific issues:

You can see how this level of specificity can be helpful in evaluating whether a given stamp has genuine or altered, or added perforations.

Now to the question. So far as I am aware, no expertizing house requires the use of the K-gauge, but I can guarantee that it is an important resource for those of us who expertise 19th- and 20th-century U.S. stamps.

I will often cite K-gauge measurements in my explanatory notes supporting an opinion, but I could not guarantee that the expertizing house staff members will cite those numbers in the certificate, especially when the K-gauge proves the stamp to be a fake.

Bottom line, if you want K-gauge measurements included on your certificate for a U.S. stamp, you must specify that request. However, keep in mind that a fake might not match any K-gauge measurement, or the wrong one. And in that case, there is no point in noting that.

Answering the K-gauge question led me to go back to review the last several hundred patients (the stamp or cover submitted for authentication) that I have examined to see what submitters asked about their stamps. The results fall into three categories: nothing, good, and not so helpful.

A surprising number of collectors simply left empty the section labeled, “The following information is desired.” Thus, the expertizer is left with no guidance other than the suggested catalog number.

In general, the more specific the entry, the better. For example: “Is the stamp genuine with original gum and NH [never hinged]. Has it been reperforated, repaired or altered in any way?”

Another that I liked was “Confirmation of Cat. Number and color in a footnote at the bottom of page 243 in 2016 Scott Specialized (red brown rather than golden brown).”

I would include the following examples in the not-so-helpful category: “Authentic?”, “Scott number correct?”, “Carmine lake?”, “Cancel type?”, “Is it real?”, and “Value?”

With respect to the single-word question “Value?”, don’t bother asking. We, the expertizers, don’t know, except in a very general sense. We know what the catalog listing says (if it is a listed item). But is that a reliable value? In fact, there are many values for a single item: catalog, auction realization, retail, wholesale, what the owner thinks it should sell for, and what I am willing to pay.

Only a fool would try to wade into those waters by citing a value beyond what is in a recognized reference.

Ultimately, the value depends upon many facets, including the many elements of condition, the number available at a given point in time, how badly I or someone else needs the item, and the number of serious bidders chasing a given lot in a given auction.

Not all experts expertize

Who do the expertizers consult, besides each other? A loaded question, you think? There are people in the hobby who are specialists to such a degree that they would be of limited use to a stable of expertizers. There are others who feel they don’t have the time, tools or interest in doing this work.

And yet, they can be truly helpful when an expertizer trips over something that defies explanation, or presents conflicting evidence that needs another pair of experienced eyes. Such a person is friend Jim Kloetzel, the editor emeritus of the Scott Specialized Catalogue of United States Stamps and Covers. During his many years at that helm of the Scott catalogs, he has seen it all and is an exceptional resource.

Recently a friend sent me the 32¢ Prairie Crab Apple stamp (Scott 3196) from the 1998 Flowering Trees set. Note the wandering green line on the used example. A cursory review left me feeling conflicted. I know of no way in which this kind of variety could be a genuine result of production.

And yet, the stamp’s paper looked undisturbed to me. So, I thought, “I’m missing something. Send it to Jim.”

Every expertizer needs to have a healthy dose of humility. And Jim contributed to mine with his reply: “I would say that the paper looks VERY disturbed. Here are the ways: The fact that the paper is whiter than that on a normal example is the first clue.

“Check this stamp under both short wave and long wave UV [ultraviolet] light. The tagging is gone! I didn’t even know this was possible to create, but I am no chemist. The normal tagging on this stamp seems to be prephosphored paper with a dull yellow green look, but that layer is gone on this stamp, and the result is that the white paper remaining appears very rough compared to the normal stamp.

“Under long wave UV, the paper is very white and displays irregularities. Definitely not normal. Something has been done to this stamp.

“Could it be that whatever chemical was used to remove the tagging also caused the irregularities, including causing some of the ink to ‘migrate’? That frame line at the right is not the only ink to be disturbed/moved.

“Other lines have moved to a much lesser degree, and even the ink that remains in the proper places shows disturbances and obvious white breaks. Perhaps whatever chemical was used caused the tagging layer to be removed, some of it sliding and moving the ink when it did so. Then the ink ‘reapplied’ itself in different locations and ways upon drying.

“Did you notice that the microprinted ‘USPS’ is missing from this ‘patient’? How do we account for this? Long story short: I think it is necessary for you to reconsider your comment that this stamp appears to be undisturbed. This stamp has definitely been worked upon by agent/agents unknown.”