Why stamps from two countries are found on one cover: U.S. Stamp Notes 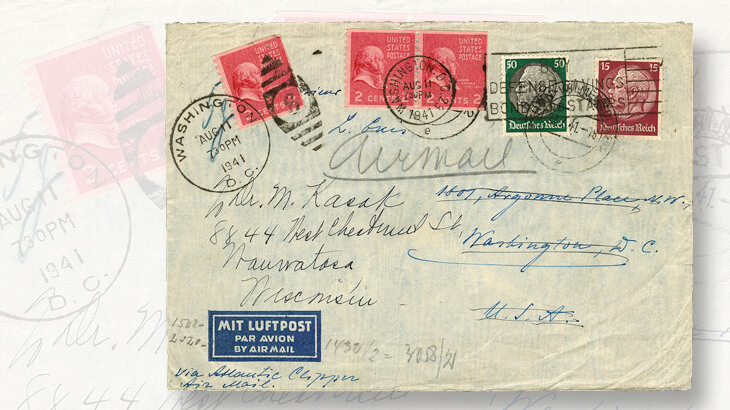 Forwarded from Washington, D.C., to Wauwatosa, Wis., in 1941, this German-origin cover required an additional 6¢ in United States postage for airmail service, which was paid by three 2¢ Prexie horizontal coils. 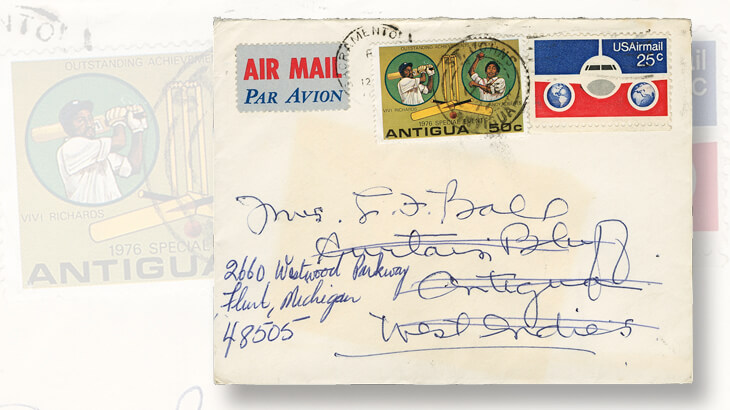 Covers with regular postage stamps of two countries are unusual. This example was sent from the United States to Antigua, but the addressee had moved on. For the cover to be sent onward by airmail, the Antigua stamp was needed.
Previous
Next

A facet of stamp collecting that I haven’t previously looked at in this column is covers bearing the regular postage stamps of both the United States and another country.

Unlike simple postage due covers bearing the due stamps of the receiving country, covers with regular postage stamps from two countries are quite scarce.

The cover sent from Germany to the United States in July 1941 is addressed to Washington, D.C.

The two Germany stamps (Scott 423 and 428) pay the Atlantic clipper rate to the United States.

From Washington, the cover was forwarded to an address in Wauwatosa, Wis.

Had it been forwarded by surface mail, the German stamps would have included that service. But the forwarding was by airmail, and that was an additional service with an additional charge. The charge was paid by the three 2¢ Prexie horizontal coils (Scott 841).

The outbound example was sent from California in 1977 to Antigua in the West Indies. It appears that this cover arrived after the addressee had gone or had returned to the United States.

The 25¢ U.S. airmail stamp (Scott C289) paid the airmail rate to Central America. Had the cover been marked “undeliverable Return to Sender” in Antigua, the 25¢ stamp would have covered that service, but forwarding to a new address by air required the 50¢ Antigua postage that was added (456). It was canceled on Feb. 17, 1977.

These types of covers are nice additions to any collection, but awfully hard to find.

How did a mailing get to Japan without paid postage?