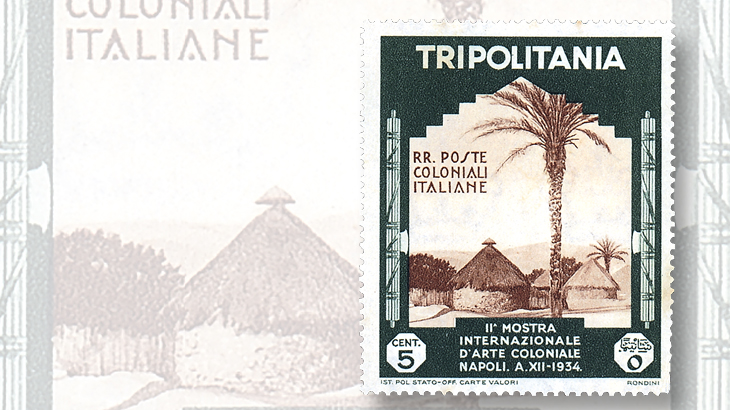 An African village scene, possibly an oasis in Italian Libya, was the design for all six of the October 1934 Tripolitania commemoratives. 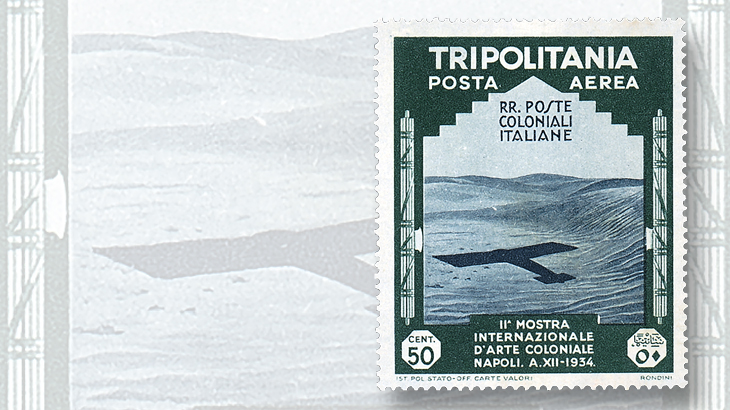 In a departure from the usual airmail designs of the time, this 1934 Tripolitania issue, from a matching set of six, depicts the shadow thrown on the desert by an airplane passing overhead.
Previous
Next

By 1934, Italy had suffered the tyranny of Mussolini’s National Fascist Party for more than a decade. In all things, “Il Duce ha sempre ragione” — the leader was always right.

In Mussolini’s fascism, the goals of the state were all that mattered, and the Italian state wanted to expand: take more land and also gain control of the Mediterranean. In his autobiography, published in 1928, Mussolini wrote that his main objective was “to make Italy great, respected, and feared,” by promoting the superiority of Italian civilization, reviving the glories of the Imperial Roman Empire, and demonstrating Italy’s greatness through its conquests.

Italy’s colonial empire in 1934 was not huge, but it was expensive to maintain. Propaganda to encourage nationalism among the public, including support for colonialism, was extensive. Culture was one of the tools of propaganda, and included state sponsorship of exhibitions of colonial arts for scholars, and agricultural and colonial fairs for the general public.

Naples was a highly symbolic choice for the exhibition site. It both eyed Africa (as Mussolini also did) and was the port from which all the colonial expeditions departed.

Castel Nuovo, the medieval castle above the port of Naples, underwent massive renovations to accommodate extensive displays of paintings, sculpture and artifacts, as well as an entire mock Arab village, with imported Tunisians, Libyans, and Eritreans in residence for the viewing pleasure of visitors, who also could visit a fake Arab cafe, dance hall, and other entertainments.

Italy itself did not issue any stamps for the second colonial exhibition, but several of its colonies did: Tripolitania, which had been subdivided from Italy’s colony of Libya, on the edge of the Mediterranean in North Africa, in 1923; Cyrenaica, the other province resulting from the subdivision of Libya; Eritrea, an Italian colony in East Africa; and Italian Somalia, also in East Africa.

Tripolitania’s name dates to its Phoenician days of the seventh century B.C., from the Latin tripolis, for the three cities of Oea (now Tripoli), Leptis Magna, and Sabratha. It had been part of the Ottoman Empire, but became an Italian colony in 1927.

In 1934, Tripolitania, Cyrenaica, and Fezzan became part of Italian Libya, but not before the first two entities had issued stamps on Oct. 16, 1934, for the second colonial arts exhibition.

Tripolitania’s six commemorative bicolor issues (Scott 73-78) share the same design of a scene of an African village with huts with conical, thatched roofs, and several palm trees. They were issued in six different color combinations and denominations of 5 centesimi, 10c, 20c, 50c, 60c, and 1.25 lire.

Fred Melville, writing in the Stamp Lover of November 1934, identified the design as a view of the oasis of Syrte, in the Sahara.

The six Tripolitania airmail stamps (Scott C43-C48) are of two different designs: the 25c, 50c, and 75c stamps have a desert scene showing the shadow of an airplane passing overhead, and the 80c, 1-lira, and 2-lira stamps show three members of the camel corps staring at an aircraft passing overhead (the camels also are observing the plane). The bicolor airmail stamps are in various colors by denomination.

Both the regular and the airmail stamps were printed by photogravure on white wove paper with crown watermarks, then perforated gauge 14. In the November 1934 Stamp Lover, Fred Melville described the stamps as “massive”; they are a bit oversize, but still only 40 millimeters by 47mm.

It is interesting to note a design motif on all of the stamps, consisting of what could be viewed as simply a decorative post or pillar at either side of the vignette. Closer examination reveals the “posts” are a stylized rendering of the fasces of ancient Rome: symbols of authority made of a bundle of elm or birch rods held together with bands, and with an axe head projecting from the top.

Mussolini adopted the fasces as his own authoritative symbol, extending the name to his new political party and using the design frequently. There is no doubt that the stamps for the colonial arts exhibition were items of political propaganda.

The denominations are shown on the stamps in both European and Arabic words and numerals. At the foot of each stamp, beneath the vignette, tiny printing reads, “Ist. Pol. Stato.-Off. Carte Valori” and “Rondini.” The abbreviations refer to the printer of the stamps, Istituto Poligrafico dello Stato, Officina Carte Valori, the Italian government printing office, in Rome.

Rondini was Giuseppe Rondini (1885-1955), a painter, printmaker, illustrator, and graphic designer who had done a great deal of work in the 1930s for the Italian Institute for Africa and the East. Rondini created many covers and illustrations for schoolbooks for children in the colonies as well as posters for shows at the colonial museum in Rome.

The 2016 Scott Classic Specialized Catalogue of Stamps and Covers 1840-1940 values a set of the Tripolitania second colonial arts exhibition issues, including all 12 of the regular and airmail stamps, at $63 unused, $302 used, and $155 for a mint never-hinged set.