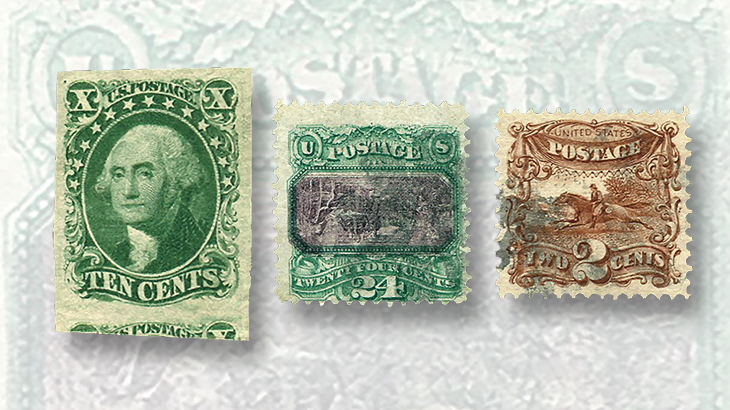 Among the highlights of the April 2-3 Regency Superior sale are these three U.S. gems: a Type IV example of the 1855 10¢ Washington that sold for $17,400; a lightly used example of the 24¢ Declaration of Independence stamp from the 1869 pictorial series,

Regency Superior held a sale April 2-3 of United States and worldwide stamps, in conjunction with the St. Louis Stamp Expo.

Amid a nice run of U.S. classics, an unused 10¢ 1855 Washington stamp showing design characteristics identifying it as the hard-to-find Type IV, stood out as especially appealing.

The 10¢ of 1855 was introduced in a hurry to prepay the new transcontinental rate that came into effect that year. As a result of the California gold rush, the U.S. population was shifting westward, resulting in an increased volume of mail to the Pacific coast.

The new stamp at first was issued imperforate. One printing plate was prepared, comprising two panes of 100 stamps each. Most of the impressions are missing parts of the outer frame, as a result of the design being incompletely transferred to the plate.

Specialists group these varieties into four types: Type I, with the outer lines of the frame practically complete, occurred only on the bottom row of stamps in the sheet. Types II and III have the design partly cut away at bottom or top, respectively, and Type IV shows the outer lines of the design recut by the engravers at top or bottom, or both.

Only eight stamps from the original plate received this corrective recutting, making Type IV by far the scarcest of the four types.

A jumbo-margined, unused example of the 10¢ Type IV (Scott 16), including a part of the stamp below, was described in the Regency Superior sale catalog as “by far the finest appearing example recorded” of the 15 known unused. Despite lacking gum and having a small thin in the margin, the stamp sold for $17,400, including the 20 percent buyer’s premium added by the firm to all lots.

(The same four types also can be found on the perforated version of the 10¢, issued in 1857. A second plate was made in 1859, in which the little pearls at the side of the frame were partly to mostly missing, resulting in a variety known as Type V.)

A lightly used example of the 24¢ Declaration of Independence stamp from the 1869 pictorial series, with the violet vignette inverted in relation to its green frame (Scott 120b), was described as “unusual” for being sound. Centered low and to the right, its faint, circle-of-wedges cancel leaves most of the design clearly visible. The invert sold for $19,200.

A lovely example of the 2¢ Post Rider stamp from the same series (Scott 113), graded 90 by the Philatelic Foundation, sold for $510, against a value of $225 in the “Stamp Values–U.S. Specialized by Grade” section of the Scott Specialized Catalogue of United States Stamps and Covers.