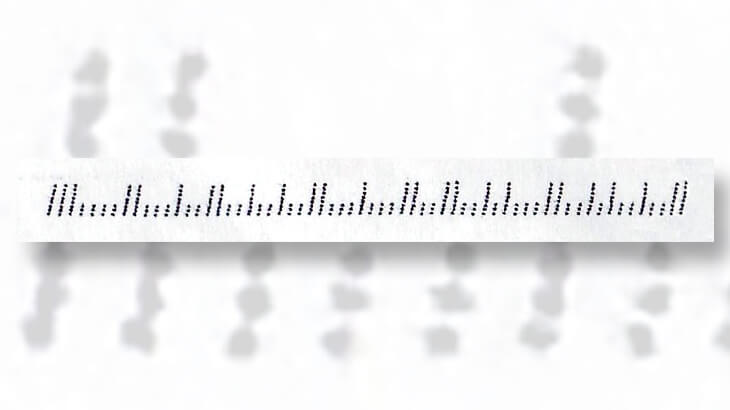 A white return-address barcoded letter-mail labeling machine label can be used to obliterate a Postnet bar code placed on an item when it was first mailed. 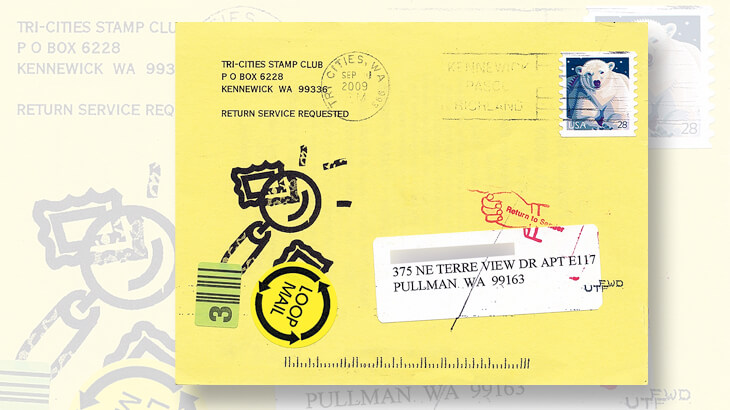 The addressee on this 2009 postcard moved and left no new address with the U.S. Postal Service. The Postnet bar code for the incorrect address was not obliterated and, when read by the automated postal system, it caused the card to become loop mail, returning repeatedly to the bad address. 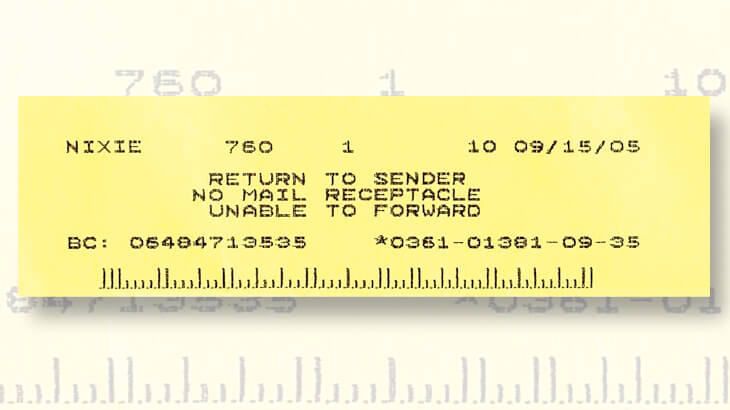 On its website, the United States Postal Service states that it is a common misconception that mail that is undeliverable as addressed (UAA mail) — also commonly referred to as return to sender (RTS) mail — is also loop mail.

Rather, as defined on the USPS website, loop mail is “mail sent to an incorrect destination as a result of a wrong bar code and/or wrong ZIP Code.”

UAA and RTS mail have a correct bar code, and so, by definition, are not loop mail.

Before discussing loop mail, I will briefly comment that the forwarding and return of mail are presently handled by an automated system that expedites these processes.

The plan currently in operation is the Postal Automation Redirection System (PARS). It is a complex system that was explained by Michael Ludeman in the April 2006 issue of Auxiliary Markings, the newsletter of the Auxiliary Markings Club.

For the moment, it is enough to know that, if used, PARS would have produced a label similar to that shown here in the third illustration.

Now, getting back to the discussion of loop mail, we will see that while it is true that UAA mail is not by its nature loop mail, it can become loop mail.

This is the 11-digit code that is associated with the address on the card (the 1 at the end is a “checksum” number that can aid in correcting an incorrect Postnet bar code).

We will see that because this bar code remained visible on the card, it was the cause of the card being loop mail.

Apparently the addressee was not at the address on the card, but unfortunately this person apparently had not submitted a change-of-address form to PARS. Therefore, it was not possible to forward the card; note the small stamped marking, “UTF,” which stands for unable to forward.

When the card was sent to the PARS center for appropriate handling, no change-of-address form was on file, and the automated machinery in the PARS center read the Postnet code and kept returning the card to the addressee’s post office.

And so, it became loop mail.

This “looping” is usually circumvented by obliterating the addressee Postnet code, either by use of a black marker, or covering it with a thin white return-address barcoded letter mail labeling machine sticker like the one pictured in the second image.

Alternatively, the incorrect Postnet code can be covered with a printed-on-demand black-dot (“Nixie” or not deliverable) PARS yellow return label (see third illustration), or with another type of obliterating material.

Placing a PARS label over the incorrect Postnet code apparently was not possible in this case.

Loop mail thus occurs, as it did in this case, when the addressee bar code is not obliterated by one method or another.

What eventually happened, after the item looped around the postal automation system one or more times, was that someone, possibly the person tasked with delivering this particular item, noticed that he or she was getting the postcard back multiple times.

The postal employee realized that the postcard had to be hand-sorted for it to be returned to the sender. Presumably this hand-sorting included the placement of the red-stamped “Return to Sender” pointing hand.

Now that I understand what loop mail is, I wonder why some postal worker wouldn’t immediately recognize that an item that is undeliverable as addressed, and is to be returned to the sender, and still has the original addressee bar code on it, will be a problem for the automation return and forwarding system, and simply hand-sort it immediately.

Unfortunately, this apparently did not happen, and the result was a piece of loop mail.

Incidentally, notice the green “3” barcoded presorting label on the card. This indicates that the card was on the top of a stack of 10 or more pieces all sorted to the same three-digit ZIP Code.

I commented on the “UTF” notation to the right of the address. Doug Quine and I have discussed these types of notations that include, but are not limited to, the abbreviations UTF (Unable to Forward), FWD (Forwarded), NSN (No Such Number), and ANK (Addressee Not Known).

As best as we can discern from examples we have seen, their use began as early as 2007, but I suspect that it was even earlier than that.

How is fraudulent matter to be handled in domestic mails?