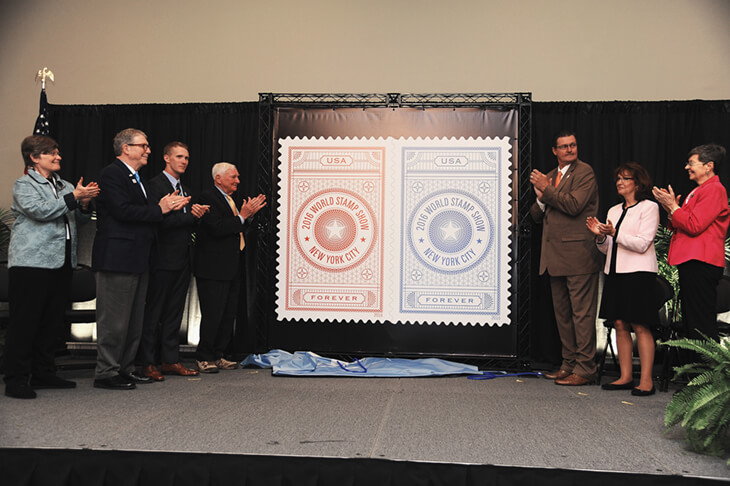 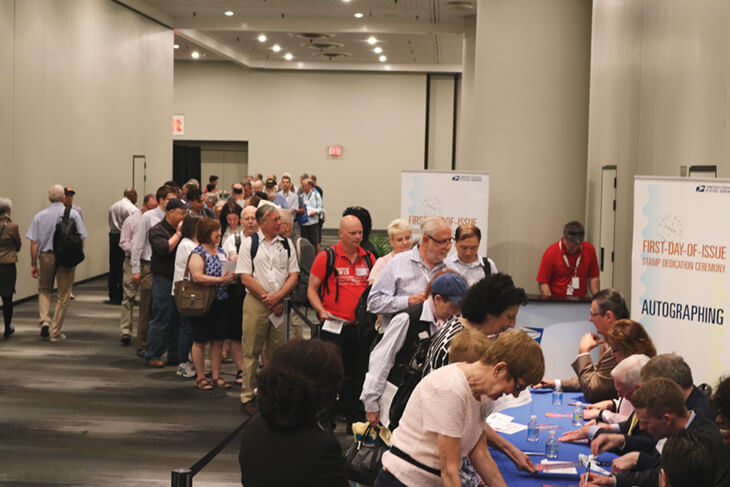 Collectors line up for autographs following the May 28 first-day ceremony for the World Stamp Show-NY 2016 forever stamps folio. 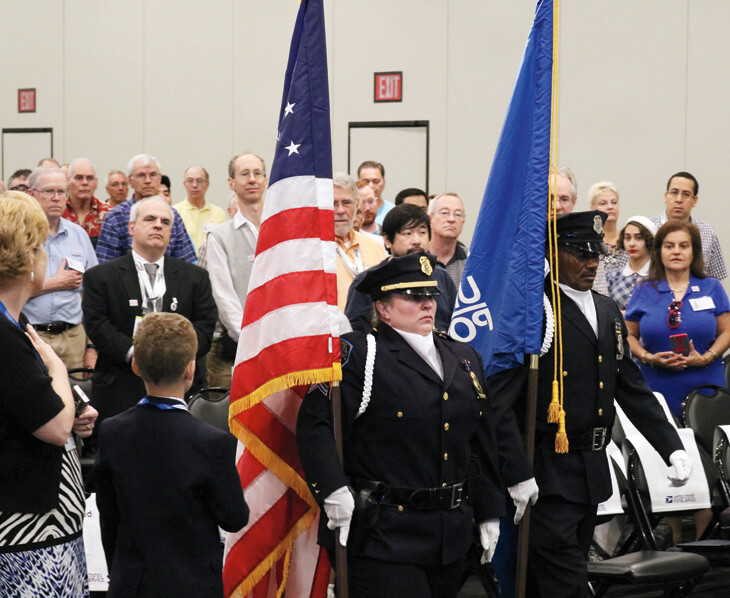 The U.S. Postal Inspection Service New York Division Honor Guard presenting the colors near the beginning of the May 29 ceremony for the Repeal of the Stamp Act forever stamp. 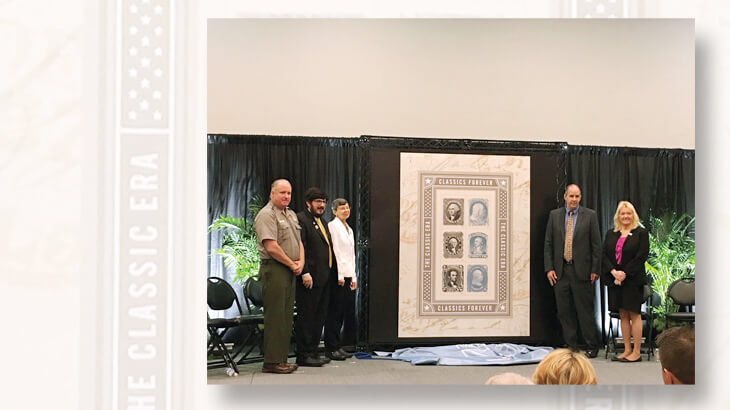 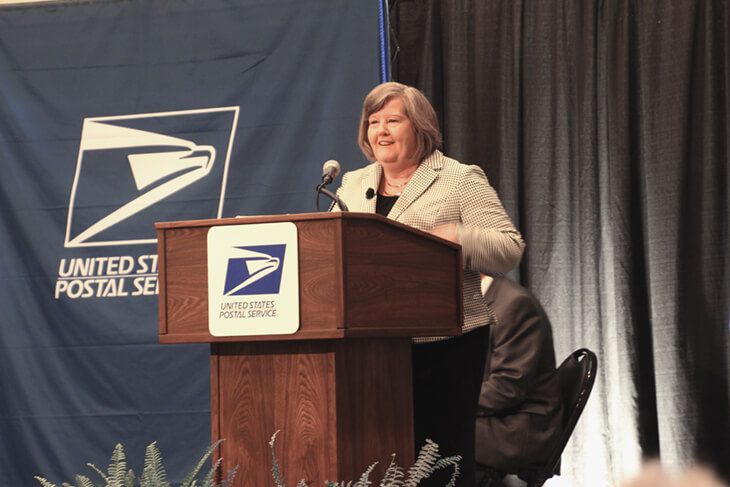 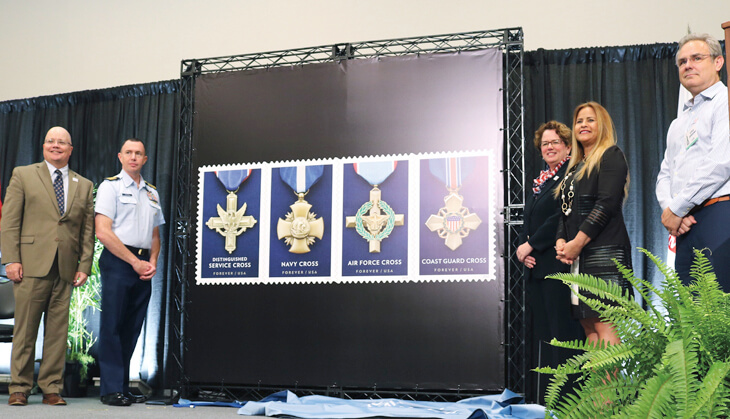 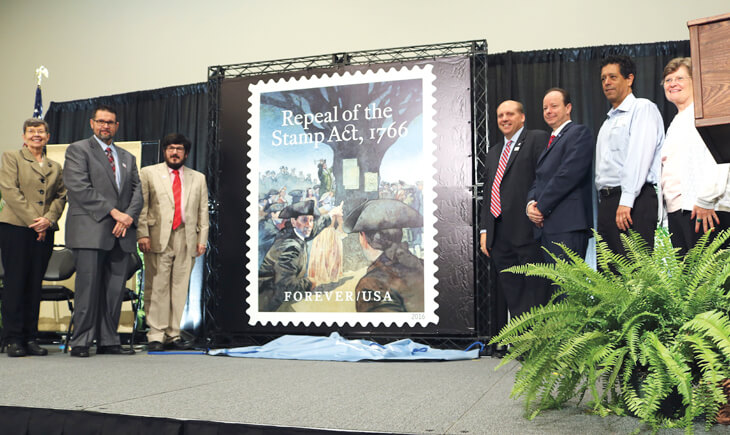 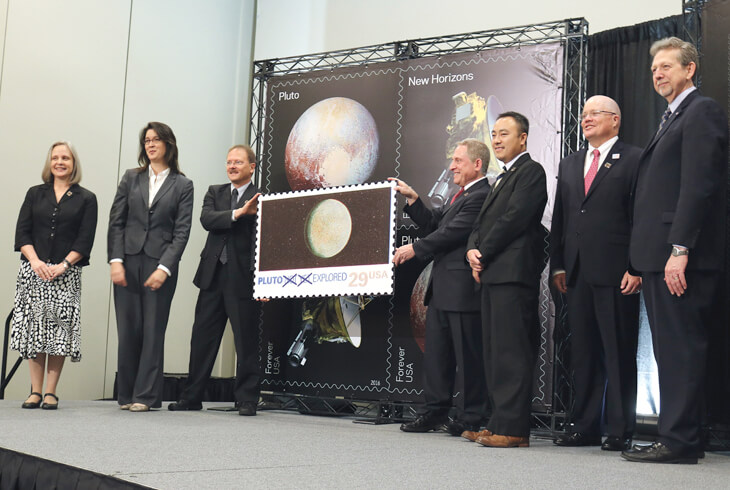 NASA scientists, including members of the New Horizons spacecraft team, joined U.S. Postal Service officials May 31 to welcome the new Pluto — Explored! stamps and the Views of Our Planets stamps. 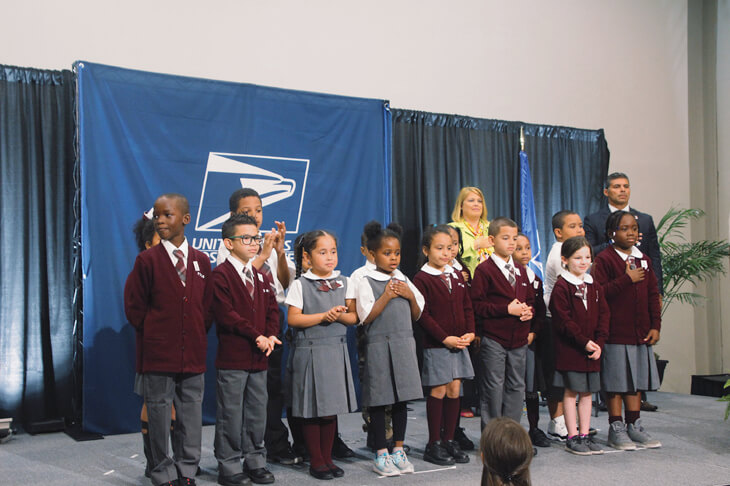 Students from P.S. 064 Robert Simon School prepare to recite the Pledge of Allegiance at the Colorful Celebrations first-day ceremony held June 3, Children of the World Day at the show. 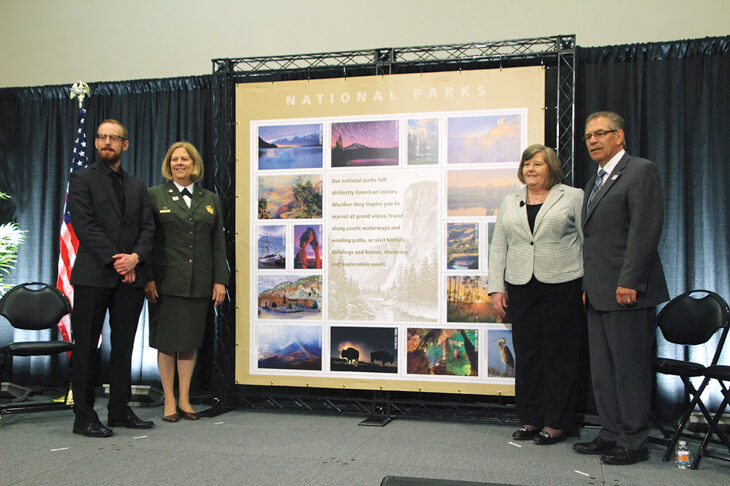 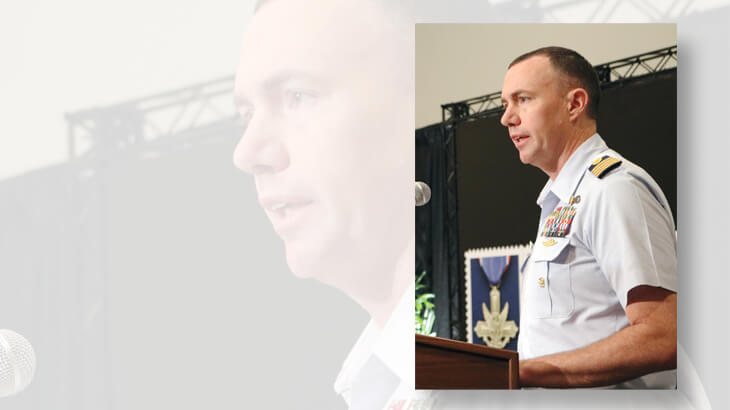 Morkan was one of the featured speakers at the May 30 ceremony for the Service Medals stamps. 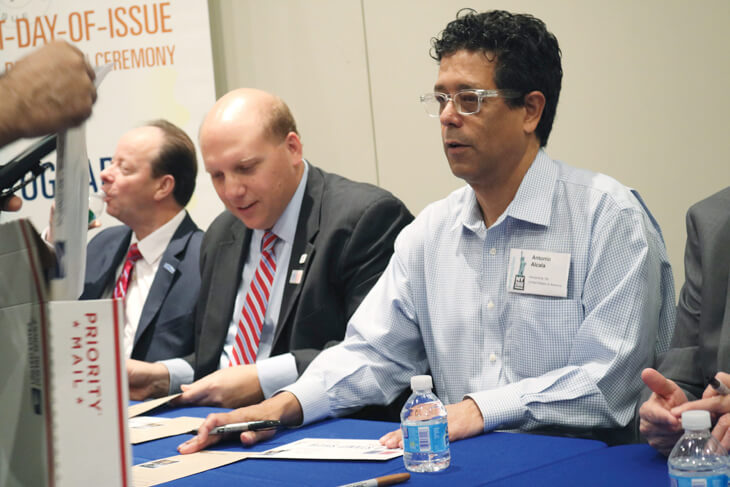 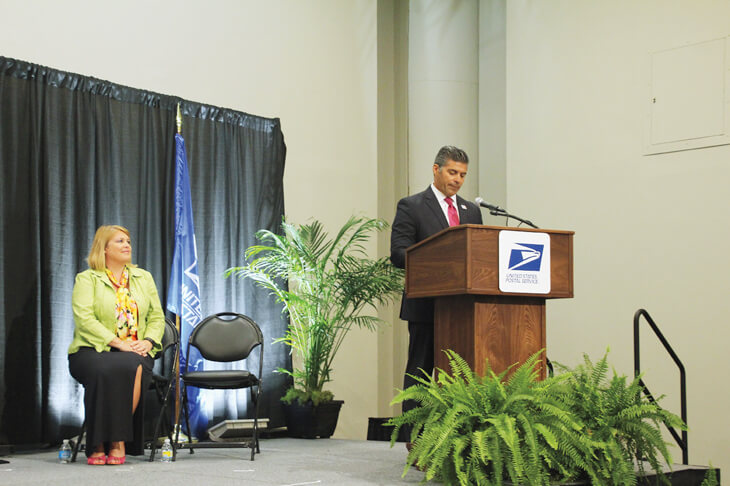 Sharon Owens and Elvin Mercado, both of the USPS, at the Colorful Celebrations event. 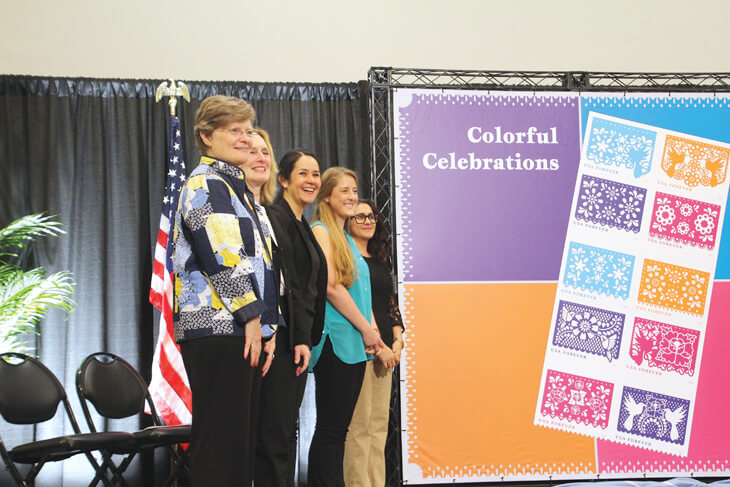 By Michael Baadke and Denise McCarty

World Stamp Show-NY 2016 had plenty of everything for the stamp collector, and that included first-day ceremonies sponsored by the United States Postal Service.

U.S. stamp ceremonies were held each of the first seven days of the eight-day international stamp show, which ran May 28-June 4 at the Javits Center in New York City. All of the stamps issued except one came in sets of multiples, resulting in 49 U.S. stamps being issued in the course of one week.

Entry to the show and each of the first-day ceremonies was free. Collectors in attendance also received free ceremony programs within envelopes postmarked with the first day cancel, and had the opportunity to obtain autographs from ceremony participants after each event.

The first ceremony, on May 28, celebrated the new World Stamp Show-NY 2016 folio that contained two forever stamps with geometric designs.

Among those in attendance were two men responsible for the stamp design, USPS art director Antonio Alcala and graphic artist Michael Dyer.

The new stamps reverse the color and white sections of last year’s red and blue stamps and present them in a novel two-part folio of 24 stamps.

The ceremony participants then gathered together on stage to unveil the matching designs, which were presented as 6-foot-tall reproductions.

Robert E. Lamb, former APS executive director and now a member of the American Topical Association’s board of directors, was introduced next. “Stamp shows are always fun, New York City is always fun, so I think we’ve got a winning combination here,” Lamb said. He complimented the new stamps as a wonderful tribute to the stamp hobby.

Randy L. Neil, editor of the American Stamp Dealer and Collector magazine and a former APS president, was next to speak. He recalled attending Fipex, the Fifth International Philatelic Exhibition, at the New York Coliseum 60 years ago.

New York City is still the great mecca of American philately, Neil said. “Let’s get out there and have some fun!” he called out, and his invitation was met with enthusiastic applause.

Repeal of the Stamp Act

The only U.S. stamp issued on its own during World Stamp Show-NY 2016 was the Repeal of the Stamp Act forever stamp, which was introduced with a rare Sunday ceremony May 29.

The theme of the ceremony was history, celebrating the event commemorated on the new stamp, the 1766 repeal of the Stamp Act, a tax imposed by the British upon the colonists to pay for the defense of the colonies.

Michael J. Elston, associate general counsel and chief ethics and compliance officer for the USPS, was introduced as a relative of George Washington, eight generations removed. The audience laughed when Elston opened by asking if anyone in attendance was from the United Kingdom, and then apologizing in advance for his remarks.

Elston spoke about the important event the new stamp recalled, and said, “The dedication of this stamp today, Learning Never Ends Day, commemorates the 250th anniversary of this monumental act of defiance, and the beginning of a movement that would establish the United States of America as a free and independent nation.”

English also commended the historic theme of the stamp, and recommended it as a good stamp to offer to youngsters to reinforce an interest in stamps in history.

Piazza explained that the new stamp was the first of two to make use of elements from the National Postal Museum’s collections.

“Wednesday’s Classics Forever miniature sheet was engraved from six original proofs in the museum’s collection. And the red proof of the 1765 tax stamp that’s in the selvage of today’s release was one of the first philatelic items ever collected by the Smithsonian Institution. We’ve owned it since 1889,” Piazza said.

The stamp is issued in a small pane of 10, with a selvage imprint that includes the inscription, “Taxation without representation is tyranny.”

Four stamps picturing four service cross medals — the Army Distinguished Service Cross, the Navy Cross, the Air Force Cross and the Coast Guard Cross — were issued May 30. The military medals are awarded for valor in combat.

“Story after story, act after act reveals a new profile in courage and a spirit of American greatness that has defined this nation from the very beginning,” said Seaver. “These medals — and these stamps — pay homage to such heroic actions and dedication to duty.”

“It takes extraordinary heroism to be awarded such a decoration and frequently it requires the ultimate sacrifice,” said Morkan. “That type of sacrifice, that willingness to lay your life on the line for your country is what we as a nation pause to reflect upon and to pay homage to on Memorial Day.

It is a great day for parades and celebrations and backyard barbeques with family and friends — but it is also the day that we honor those who since the war of independence have done what needed to be done.”

Views of Our Planets and Pluto — Explored!

An estimated 500 collectors were treated to remarks from a number of speakers involved with U.S. space exploration efforts during the May 31 ceremony for the two sets titled Views of Our Planets (eight stamps in a pane of 16) and Pluto — Explored! (two stamps in a pane of four).

Stern offered his thanks to the Postal Service “on behalf of New Horizons and the 2,500 Americans who worked to build a spacecraft and a launch vehicle to send it all the way across our solar system on a spectacular mission of exploration.”

He explained that the 1991 stamp that showed Pluto with the message “Not Yet Explored” was on the mind of those involved in the New Horizons project.

“We thought we would have a little fun and fly one of these stamps to Pluto — just to cancel it.

“We launched New Horizons in January 2006 … with the spacecraft in the nose cone, and with that stamp on the spacecraft, being accelerated at the fastest speed that any spacecraft was ever launched at, setting a new record.”

At the end of the ceremony, several guests including Stern crowded around the blowup of the new Pluto issue, holding an enlargement of the 1991 stamp, with the phrase “Not Yet” crossed off, leaving only the word “Explored.”

“It’s not surprising that Washington, Franklin and Lincoln were featured on six of America’s earliest stamps,” Reblin noted. “In fact, it seems fitting that we’re celebrating them again with today’s souvenir sheet — and the new forever versions of these 19th century classics.”

A few days before the stamps were issued, Postal Service officials announced that these stamps were intentionally created with an adhesive composition that allows the stamps to be soaked free of paper by soaking in water.

The stubborn adhesive of most recent U.S. stamps resists water-soaking, thwarting an age-old method used by collectors to remove stamps from envelope paper and save them in their stamp albums.

Linn’s Washington correspondent Bill McAllister has reported that Mary-Anne Penner, executive director of Stamp Services, suggested in an interview last year that she was interested in producing some stamps that could be soaked.

Penner was among those participating in the Wednesday ceremony, which also included Linn’s columnist Janet Klug, who is also the chair of the USPS Citizens’ Stamp Advisory Committee; Daniel Piazza, chief curator of philately for the Smithsonian National Postal Museum; and Rick Starr, a park ranger for the National Park Service.

The room was packed for the June 2 first-day ceremony for the pane of 16 National Parks forever stamps.

In dedicating these stamps, which are part of the national park’s centennial celebration, USPS Postmaster General Megan J. Brennan said: “The men and women of the National Park Service preserve public treasures that extend beyond the stunning vistas and habitat for wildlife that we associate with our National Parks. They provide public places for recreation, they manage museums and historical estates, and they maintain our most famous monuments.”

“The National Park Service exemplifies our collective desire to preserve our connection to the land, nature and our heritage, and to maintain what we find beautiful in our world for the benefit of future generations. And the US Postal Service is honored to help celebrate the 100th anniversary of the National Park Service through the issuance of 16 stamps commemorating America’s National Park System.”

While Postmaster General Brennan was dedicating the National Parks stamps in New York City, another first-day event was taking place on the beach at the Barrier Island visitor’s center of Assateague Island National Seashore in Maryland. Part of this outdoor ceremony was shared via a live webcast at the first-day ceremony in the Javits Center.

USPS Executive Vice President Cochrane welcomed everybody to the beach ceremony, on what was obviously a windy and foggy day.

Richard P. Uluski, vice president, area operations for the Northeast Area of the USPS, served as the master of ceremonies at the National Park service first-day ceremony at World Stamp Show. Also speaking were National Park Service Deputy Director Peggy O’Dell; and photographer Matt Dieterich, who told the story of viewing the aurora borealis and how he captured the star-trail image that is featured on the Mount Rainier stamp.

All speakers urged people to visit the national parks.

Introduced at the Postal Service’s final first-day ceremony at World Stamp Show were the 10 Colorful Celebrations forever stamps in a double-sided pane of 20.

The ceremony took place Friday, June 3, which also was Children of the World Day at the show. In keeping with this theme, young students from P.S. 064 Robert Simon School led the attendees in the Pledge of Allegiance.

In addition, Sarah Chenevert, a 2014 alumnus of the APS’ Young Philatelic Leaders Fellowship, spoke, urging collectors to mentor and encourage children and young adults interested in the hobby. She also recalled how she started collecting stamps after watching her father working on his collection.

Owens said, “I am excited to be here as we celebrate Children of the World Day to present the Postal Service’s newest stamp issuance to this great community of collectors.

“The Postal Service routinely issues stamps that honor history and tradition, as well as stamps that are visually stunning. Well, today, in one stamp issuance, we’ve accomplished both.”

The designs of the stamps are reminiscent of the Mexican folk art form of papel picado, which translates to “pierced paper.”

However, while the designs suggest cut paper, they were created digitally. Owens described them as “featuring celebratory patterns that showcase geometric shapes, flowers and birds.”

Also, Rocio Aranda-Alvarado, curator at the El Museo del Barrio, a New York City museum dedicated to Latino culture, presented a history of papel picado and showed how it is used in decorations for Dia de los Muertos (Day of the Dead).