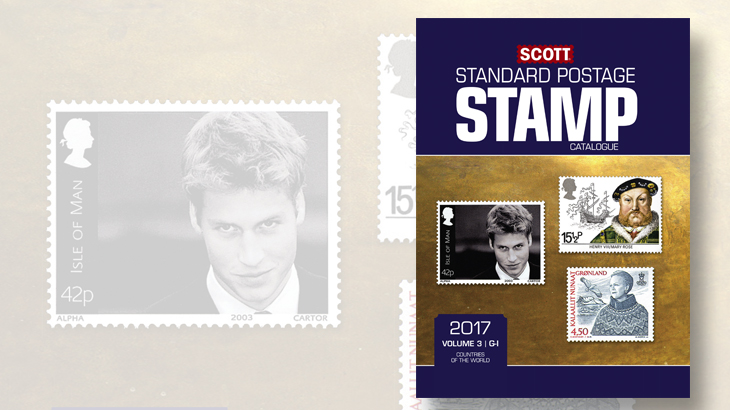 Vol. 3 of the 2017 Scott Standard Postage Stamp Catalogue includes stamp listings and values for countries of the world G-I.

We continue to see a softening in the market for modern stamps, particularly for those issued between 1960 and 1990. This softening is reflected in the recently published Vol. 3 of the 2017 Scott Standard Postage Stamp Catalogue. The values for stamps issued during this period are affected by currency fluctuations, and because these issues were issued in such abundance, the market was oversaturated, bringing down values.

A total of 2,490 value changes are found in the Channel island of Jersey, which underwent a massive review. Most value changes are decreases, reflecting a weakening of the British pound. The Jersey Wildlife Preservation Trust set (Scott 49-52) drops from $15.50 mint to $6.25. The £10 Millennium stamp (Scott 933) dropped from $40 both mint and used to $25 mint and $22 used. No. 1296, the £3 stamp commemorating the 60th wedding anniversary of Queen Elizabeth II and Prince Philip, fell from $12.50 mint and used to $9.

Numerous changes and additions appear among the Ahmad Shah Qajar issues of Iran. The reorganization began in the 2016 Scott Classic Specialized Catalogue of Stamps and Covers 1840-1940 and has been further expanded in this Vol. 3. The stamps are reorganized by tall portrait (23 millimeters) and short portrait 22½mm and by perforation, resulting in 160 new listings.

Varieties were added to German East Africa overprints issued under Belgian Congo occupation. An inverted overprint is now listed as Scott N18a for the 1916 15-centime stamp. It is valued at $225 in unused condition. A double overprint has been added as N23a for the 1-franc stamp of the same set. No value has been assigned.

As always, we encourage you to pay special attention to the Number Additions, Deletions & Changes found on page 1600 in this volume. For information about the 2017 Scott catalogs, contact your favorite stamp dealer, or call Amos Media at 1-800-488-5349. Also visit the Amos Advantage website. Digitial Scott eCatalogues are available as well.

Read more about the Scott catalogs: