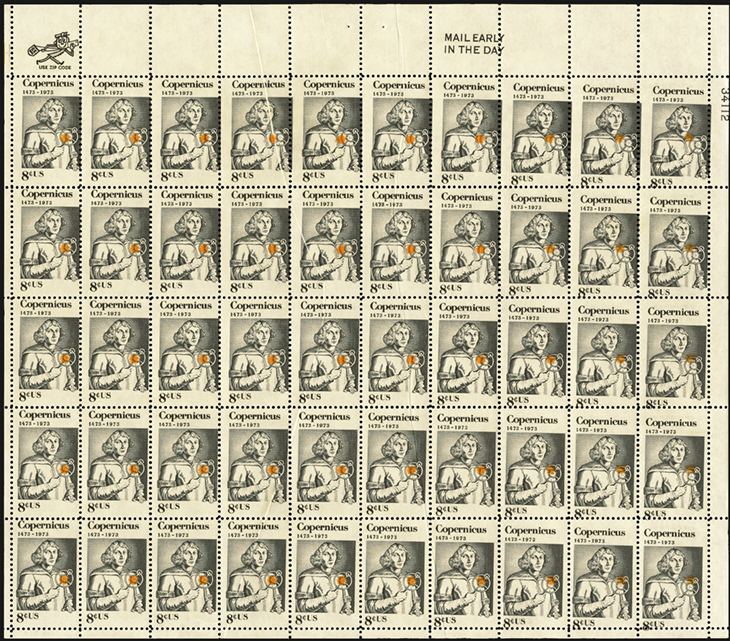 If you look at the lower left of this Copernicus pane of 50, the stamp is almost normal, with the sun in its proper position. The further you look north and east, the worse the perforation and sun placement. This was caused by paper creases, best seen at the top of vertical columns four and five. 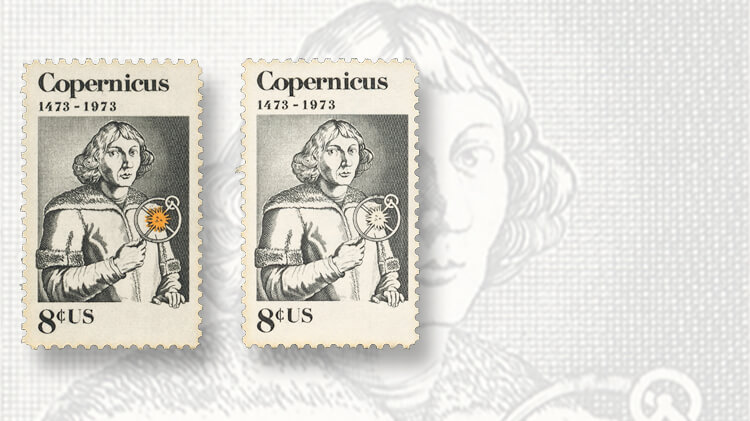 Shown side-by-side are a normal example of the 1973 8¢ Copernicus stamp (left) and one that has been altered to remove the yellow-orange sun (right).
Previous
Next

The 8¢ Copernicus commemorative of 1973 (Scott 1488) features a simple design: a basic black drawing of the great man holding his model of the sun (in yellow-orange) as the center of our solar system.

The complicating factor for this issue is that the yellow-orange sun caused several problems, as shown by the lack of a sun on a stamp pictured nearby, along with a normal example of the stamp.

Shortly after the Copernicus stamp was issued on April 23, 1973, reports began to surface that examples missing the yellow-orange sun had been found.

However, most of what we see today represented as so-called missing-sun examples are fakes made by bleaching out the yellow. The illustrated example is a fake.

There is, however, one pane of 50 stamps that was discovered missing the yellow that has been certified. All examples from this pane have been signed on the gum by the dealer who broke it up and sold it, Jacques C. Schiff Jr.

A much less valuable variety, but one that collectors can watch for is the “wandering sun” variety, shown in the second image above.

This variety was caused by a paper crease that can be easily seen at the top of fourth and fifth vertical columns. There is another crease, which is much more difficult to see, at the top of the sixth column.

The cumulative effect was to cause problems with both the printing and perforating, such that the sun is progressively more off target the further you go from the Mr. ZIP corner to the plate number corner.

The stamp in the lower left corner of the pane of 50 is almost normal — except for a slight horizontal perforation displacement upward — with the yellow-orange sun in its proper position.

The sun and perforations are progressively worse the farther we look going northeast, and are worst on the plate-number single.

Panes of the Copernicus stamp also have been discovered where the sun is uniformly off center. Singles are not common, but are not rare either.

Because of the creases, the illustrated pane is unique. Yet it is not valuable in the same way that a missing-color error would be; nor does it get a listing in the Scott Specialized Catalogue of United States Stamps and Covers.