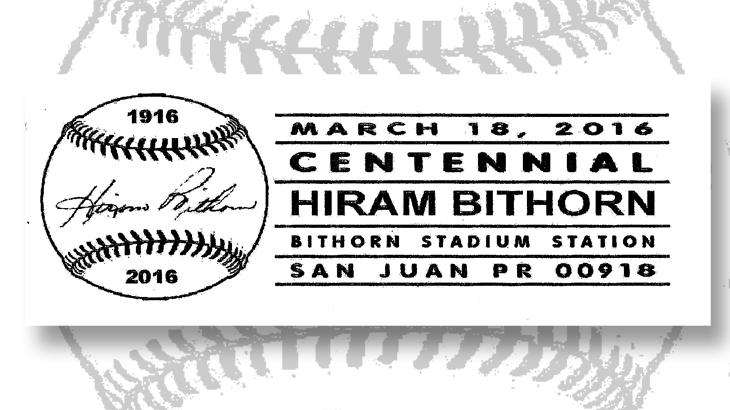 The start of the 2016 major league baseball season is only days away, and a new postmark from San Juan, Puerto Rico, pays tribute to the man who was the first major league player from Puerto Rico.

Hiram Bithorn was born March 18, 1916, in San Juan’s Santurce district. After a stint in the minor leagues and playing winter ball in Puerto Rico, Bithorn was picked up by the Chicago Cubs in 1942 and pitched his first major league game on April 15 of that year.

The 18,000-seat baseball stadium in San Juan, adjacent to Roberto Clemente Coliseum, is named Hiram Bithorn Stadium in his honor.

On March 18, the 100th anniversary of Bithorn’s birth, a pictorial postmark celebrating him, sponsored by SABR (the Society for American Baseball Research), was offered by the San Juan post office.

The postmark shows a baseball with Bithorn’s signature and the dates 1916 and 2016.