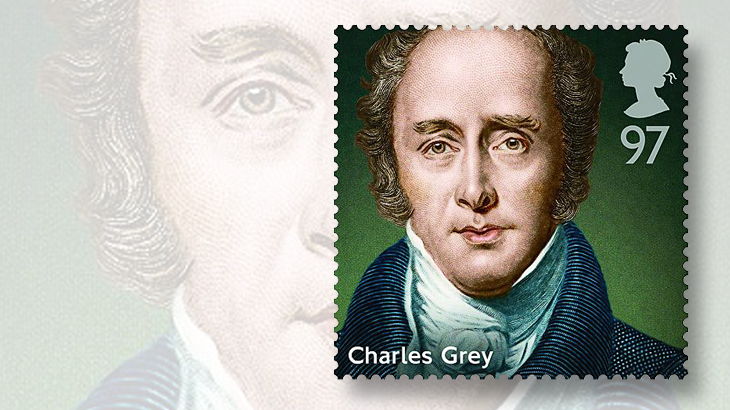 Charles Grey, 2nd Earl Grey, was born March 13, 1764, at Fallodon, Northumberland, England, the son of Gen. Charles Grey and his wife, Elizabeth. He would serve as prime minister of the United Kingdom from 1830 to 1834.

He was elected to Parliament as a member of the Whig Party at age 22, and married Mary Elizabeth Ponsonby when he was 30. Together they had 16 children.

Grey was chosen as prime minister in 1830, following the resignation of the Tory prime minister, Arthur Wellesley, the Duke of Wellington.

Paul Lay, editor of History Today magazine, wrote, “… Charles Grey, the 2nd Earl Grey, though little known today, played crucial roles in some of British history’s most important events, including the Great Reform Act of 1832, which set the country on the path to mass democracy, and the abolition of slavery.”

Grey retired in 1834. He is remembered on a 97-penny stamp issued by Great Britain in 2014 (Scott 3334) as part of the Prime Ministers commemorative set of eight.

And he is also remembered for his association with Earl Grey tea, a popular tea blend flavored with the citrus fruit bergamot.