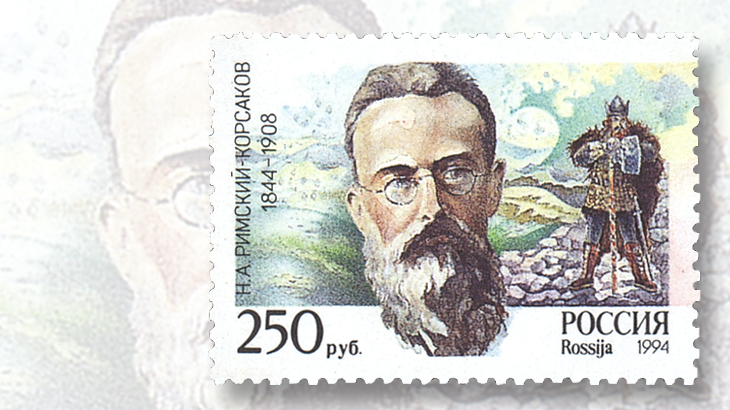 Nikolay Rimsky-Korsakov, on one of four Russian stamps issued in 1994 to commemorate the composer's 150th birth anniversary.

Russian composer Nikolay Andreyevich Rimsky-Korsakov, best known for his symphonic suite Scheherazade and the orchestral interlude Flight of the Bumblebee, was born March 18, 1844, in Tikhvin, Russia, about 120 miles east of St. Petersburg in the country’s far northwest.

Rimsky-Korsakov studied piano and composition in school, but after graduation he served more than 10 years in the Imperial Russian Navy. His service included a tour of the Northern United States during the American Civil War, but he also completed his first symphony in 1865 while still in the navy. He left the service in 1873, having secured a position teaching music at the St. Petersburg conservatory, but he continued to act as inspector of the naval bands.

His many compositions include the operas The Snow Maiden and The Tsar’s Bride, numerous symphonic works, piano music, choral music, chamber music, and songs. He also completed unfinished compositions by others, including Borodin and Mussorgsky.

Rimsky-Korsakov has been honored on many stamps from Russia and around the world. A set of four stamps from Russia issued in 1994 to mark the 150th anniversary of his birth includes scenes from the operas Sadko, Golden Cockerel, The Tsar’s Bride, and The Snow Maiden (Scott 6192-6195).