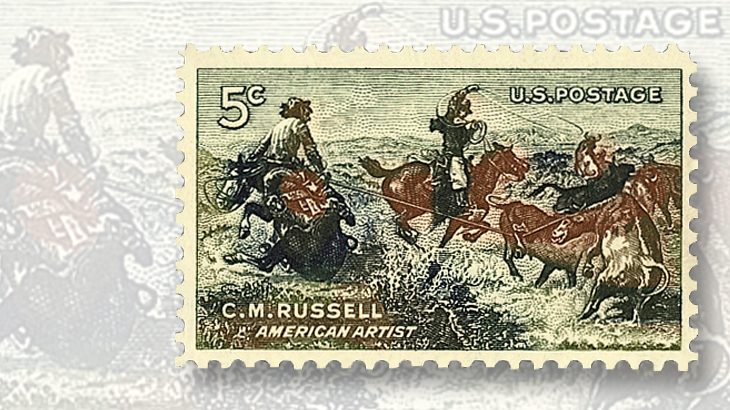 Born March 19, 1864, in St. Louis, Mo., Charles Marion Russell followed a childhood passion for drawing to become a leading artist of the American West. At age 16, he left school to find work on a Montana ranch and developed his love for the Western frontier.

He sketched and painted scenes of Western life, including the cowboys and ranch hands he worked with, the Northern Plains Indians he befriended, and the rugged landscape that he loved. He married Montana-born Nancy Cooper in 1896 and they settled in Great Falls, where Charlie pursued his artwork and Nancy became his successful business manager and promoter. She arranged showings in galleries across the country, and Russell’s fame quickly grew.

He created roughly 4,000 paintings during his lifetime, and also completed sculptures in wax, plaster, and bronze. He died in Great Falls on Oct. 24, 1926.

A 4¢ stamp promoting range conservation issued Feb. 2, 1961, includes as part of its design an ink drawing by Russell titled The Trail Boss (Scott 1176).

Russell was himself commemorated on his birth centenary with a 5¢ stamp issued March 19, 1964 (Scott 1243). The stamp illustration shows his painting Jerked Down.

A Russell painting titled C.M. Russell and Friends was selected for the central design of a 25¢ Montana Statehood commemorative issued Jan. 15, 1989 (Scott 2401).