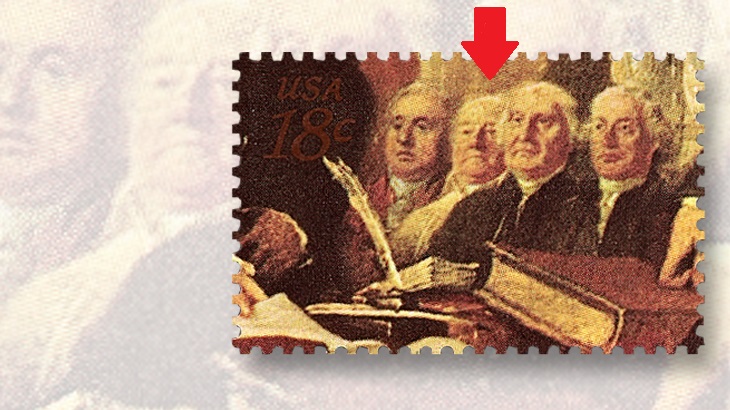 This 18¢ stamp from the 1976 Declaration of Independence souvenir sheet shows Francis Lewis seated second from left.

Francis Lewis of New York was one of the 56 signers of the Declaration of Independence. Born March 21, 1713, in Llandaff, Cardiff, Wales, Lewis was the only child of the Rev. Francis Lewis and his wife, Amy.

Schooled in Scotland and in London, young Francis sailed for New York City in 1734 and established himself in foreign trade. Married in 1745, he was captured in 1756 during the French and Indian War and held captive in France for seven years.

Upon his return to the colonies, Lewis successfully re-established his business and became involved in the movement for American independence. He was a delegate to the intercolonial Stamp Act Congress and was elected as a delegate to the Continental Congress in 1775, signing the Declaration of Independence the following year.

However, his wife Elizabeth was captured by British soldiers soon after and endured harsh conditions during her three months of imprisonment, irreparably damaging her health. She died in 1779.

Well into his 60s, Lewis continued to serve his country during the Revolutionary War on the Board of Admiralty established by Congress. He died in 1802 at age 89.

In John Trumbull’s oil-on-canvas painting Declaration of Independence, Francis Lewis is seated, the second signer visible directly to the right of Benjamin Franklin, who is standing in the foreground.

Lewis is seen second from left on the 18¢ center stamp in the 1976 five-stamp souvenir sheet reproducing the painting (Scott 1687c).