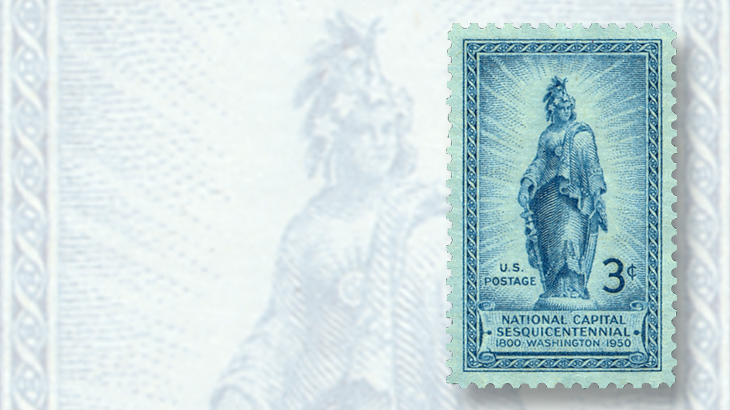 The Statue of Freedom sculpted by Thomas Crawford was featured on a 3¢ stamp in 1950.

The Statue of Freedom atop the United States Capitol dome was sculpted by Thomas Crawford, who was born March 22, 1814, in New York City.

The entire statue is the subject of a 3¢ bright blue stamp issued April 20, 1950, in a set of four stamps commemorating the sesquicentennial of the national capital (Scott 989).

The statue was originally named Freedom Triumphant in War and Peace and depicts a female figure wearing a military helmet encircled with nine stars. She is holding a sword in her right hand and a shield in her left hand.

Crawford also sculpted other features of the Capitol, including the Progress of Civilization pediment over the Senate entrance on the East Front.

Crawford spent most of his adult life in his studio in Rome, Italy. He died in 1857 during the process of creating the Freedom statue, and his widow shipped his finished plaster model to the United States so that the bronze casting could be completed.