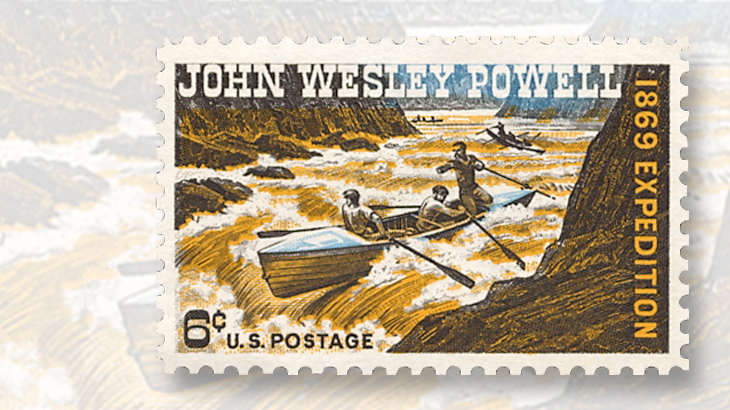 Born March 24, 1834, near Palmyra, N.Y., Powell was the son of a Methodist minister. He taught elementary school at age 18 while studying science at local colleges, and enlisted in the Union Army at the start of the Civil War. Powell suffered a terrible musket ball wound during the 1862 Battle of Shiloh that resulted in his right arm being amputated. Despite the injury he remained in the Army and was promoted to major.

After the war, he began his explorations of the American West with his wife Emma and other explorers. He studied Native Americans and learned their languages, and in 1869 he led the first expedition by European Americans down the Colorado River and through the Grand Canyon. Powell published important descriptions of the long journey.

As a nationally recognized scientist, Powell was chosen to lead the Bureau of Ethnology at the Smithsonian Institution, and was named director of the U.S. Geological Survey in 1881. He died in 1902.

A 6¢ stamp honoring Maj. Powell was issued Aug. 1, 1969 (Scott 1374), marking the centenary of his exploration of the Colorado River, which is depicted in the stamp design.