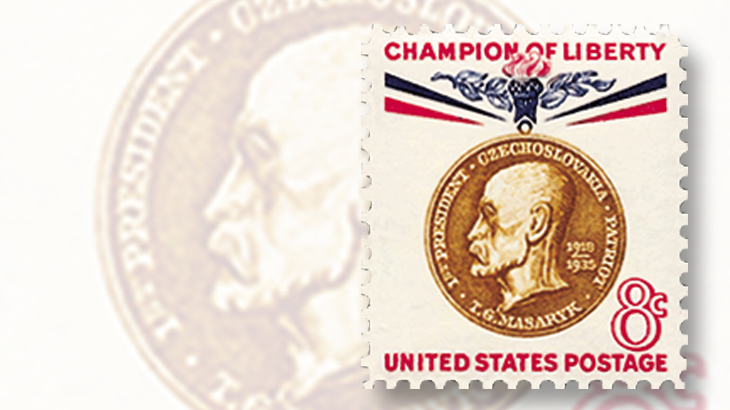 One of two Champion of Liberty stamps issued in 1960 to honor Czechoslovakian leader Tomas G. Masaryk.

Tomas G. Masaryk, considered the founder (in 1918) of the Republic of Czechoslovakia, was born March 7, 1850, in Hodonin, Moravia, then part of the Austrian Empire. The city is now in the southeast of the Czech Republic, along the border with Slovakia.

Masaryk, who began his service as Czechoslovakia’s first president at age 68 and was elected to lead the nation for four terms from 1918 to 1935, is remembered by many as a philosopher, educator and a staunch advocate for democracy.

Masaryk sought to establish an independent Czechoslovakia when he was a member of the Austro-Hungarian parliament in 1891. He traveled to the United States during World War I and met with President Woodrow Wilson to obtain support for this goal, and addressed the American people in Philadelphia and Chicago. As the Austro-Hungarian Empire disintegrated in 1918, the Republic of Czechoslovakia was created with Masaryk as its president.

During his 1878 first visit to the United States, Masaryk married an American, Charlotte Garrigue, whom he had met the previous year in Germany. She served as first lady of Czechoslovakia from 1918 until her death in 1923.

On March 7, 1960, the 110th anniversary of his birth, the United States issued a 4¢ blue and an 8¢ multicolor stamp commemorating Masaryk (Scott 1147-48). The stamps are part of the Champion of Liberty series, which honored 10 different international political leaders between 1957 and 1961.