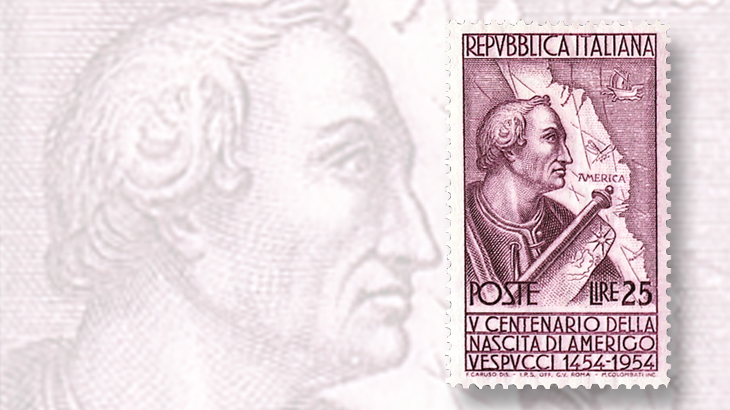 An Italian stamp issued in 1954 to mark the 500th birth anniversary of explorer Amerigo Vespucci.

The American continents are named for an Italian navigator and explorer, Amerigo Vespucci, who was born March 9, 1454.

Vespucci set sail in 1497 on the first of multiple sea journeys that he expected would take him to India, on a quest much like that undertaken by his countryman Christopher Columbus a few years earlier. Encountering the continent now known as South America, he explored the coast and returned a few years later, traveling farther south.

Vespucci came to the realization that he wasn’t exploring Asia at all, but rather, was on the coast of a continent altogether unfamiliar to Europeans.

In 1507, a German cartographer named Martin Waldseemueller, on a world map that he helped to develop using Vespucci’s reports as a guide, gave the new lands the name America, as a tribute to the Italian-born explorer who figured out that what Columbus had discovered was indeed a “New World.”

Amerigo Vespucci is commemorated on stamps from several countries around the world, including Italy, which honored the explorer on a set of two stamps issued in 1954 to celebrate the 500th anniversary of his birth (Scott 665-666).