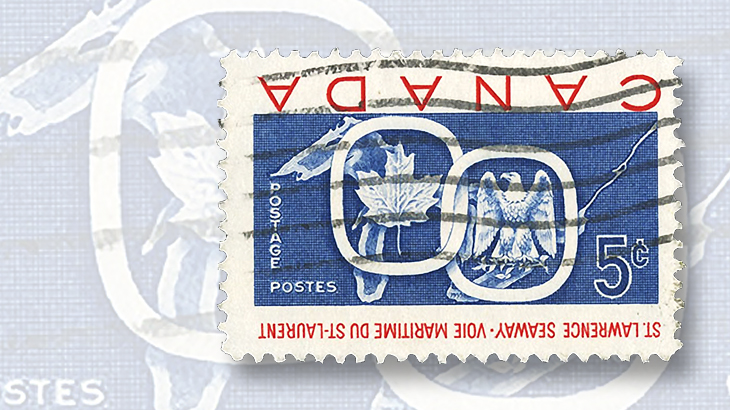 Brigham Auctions sold this fresh used example of the Canada 1959 5¢ St. Lawrence Seaway commemorative with red text inverted in relation to the blue central image for $8,125 during its Jan. 23 auction near Toronto.

Brigham Auctions continued its multi-part sale of the Brigham collection of Canada with a session on Jan. 23 near Toronto, offering material from the reigns of King Edward VII and Queen Elizabeth II.

A rare on-cover use of the 1908 50¢ King Edward VII definitive stamp, apparently one of just eight such usages documented, in this case coming from a heavy, registered money letter addressed to a bank.

One of Canada’s iconic modern errors, the 1959 5¢ St. Lawrence Seaway commemorative with red text inverted in relation to the blue central image (Scott 387a), was represented by two unused examples and one used, showing a neat wavy-line cancel.

The unused ones, one lightly hinged and one never hinged but showing a light fingerprint on the gum, went for $6,400 each, while the used stamp, which is somewhat scarcer, brought $8,125.

A corner-margin block of four of the 1985 $2 Moraine Lake, Banff National Park stamp with bluish green inscriptions omitted (Scott 936a) sold for about $3,200.