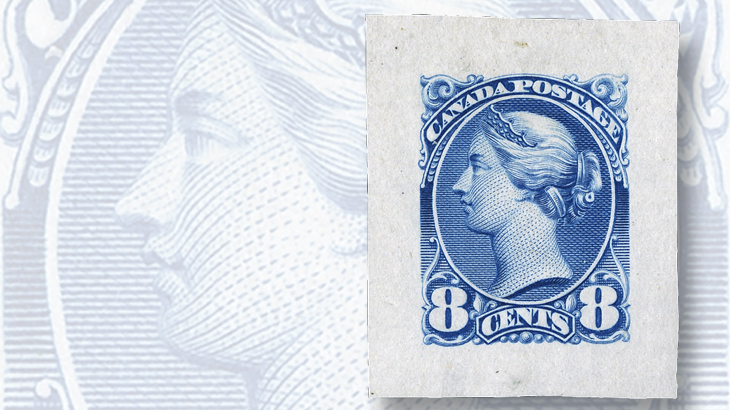 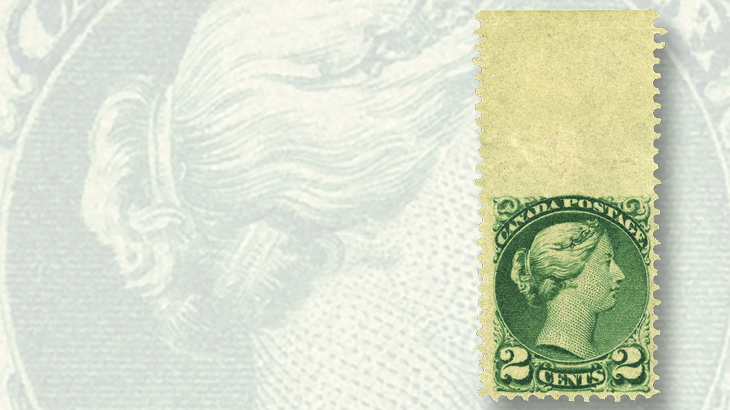 A variety of the 2¢ green Small Queens stamp with imperforate top margin is one of many production varieties offered in the April 16 Brigham sale in Brampton, Ontario, Canada.
Previous
Next

Collectors of Canada’s popular Small Queens issue of 1870-97 have a long-awaited treat in store for them as the April 16 presentation from Brigham Auctions will offer the Small Queens material from Ron Brigham’s extensive award-winning collection of Canada.

Close to 800 lots of essays and proofs, stamp singles and multiples, postal history, production varieties and more will be offered in the auction taking place beginning at 10 a.m. at the Brampton Golf Course, 7700 Kennedy Road, in Brampton, Ontario, Canada.

Brigham’s Small Queens material has been exhibited longer and more often than any other segment of his extensive collection, according to the introduction by Charles J.G. Verge to the auction catalog.

Shown nine times at national level and 13 times in international competition, Brigham’s Small Queens exhibit has received six large gold awards and has been a candidate for the grand prix d’honneur three times.

The first item offered in this auction is a handsome large engraved composite die essay displaying the four portraits of the queen used as vignettes during this series: the smaller right-facing ½¢ vignette, the larger right-facing vignette used on most other denominations, the left-facing vignette of the 1893 8¢ violet black stamp, and the Widow Weeds design for the 20¢ and 50¢ stamps of 1893.

The selection of essays and proofs from this collection is wide-ranging throughout the various denominations, and in varying degrees of scarcity.

One particularly nice find is an 8¢ engraved trial color die proof in bright blue on India paper, an item described by Brigham as stunningly beautiful and extremely rare.

The Small Queens stamps offered by Brigham include important and intriguing perforation, paper and production varieties that developed over the course of the 27 years this series was in use.

Among the 1872 2¢ green stamps is a single stamp imperforate at the top margin, leaving the stamp with a blank margin at top about as tall as the printed stamp design.

With full original gum, the stamp is lightly hinged at the bottom, according to the auction catalog description, “but possesses exceptional centering and freshness.”

Other varieties of the 2¢ stamp on offer include a used stamp with horizontal stitch watermark, a block of four showing strong offset on the reverse, a misperforated horizontal pair, a dramatic preprinting paper fold, extra rows of single perforations in singles and blocks, and more. Collectors of varieties will have a field day with this denomination and the others in the Small Queens series.

The postal history offerings at this auction provide insight into the ways these stamps were used for postage, and include single stamp frankings and combinations, a large number of international uses, mourning covers, registered mail, bisects, advertising covers and more.

Some of the several bisects on cover are today described as not officially recognized, but they were tolerated in the mail. One example is a diagonal bisect of the 1890 6¢ chocolate brown variety (Scott 43a) affixed with the 5¢ green registered letter stamp (F2) on an envelope to Margaree Forks on Cape Breton Island.

The cover is the only known registered 6¢ bisect cover, according to Brigham.

“Although the bisecting of higher denominations stamps was a ‘hold-over’ from Colonial times, it was practiced, tolerated and accepted by many postmasters in smaller towns, especially in the Maritimes throughout the 19th century… ”

The catalog can be viewed as a PDF on Brighamauctions.com, and online bidding is available through StampAuctionNetwork.com, where lots are listed and illustrated as well.