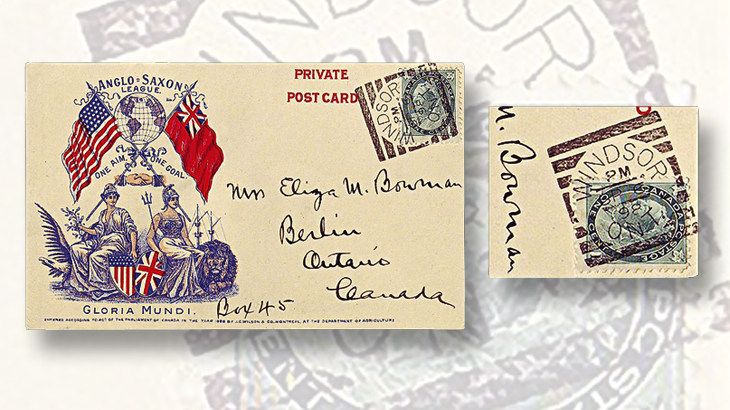 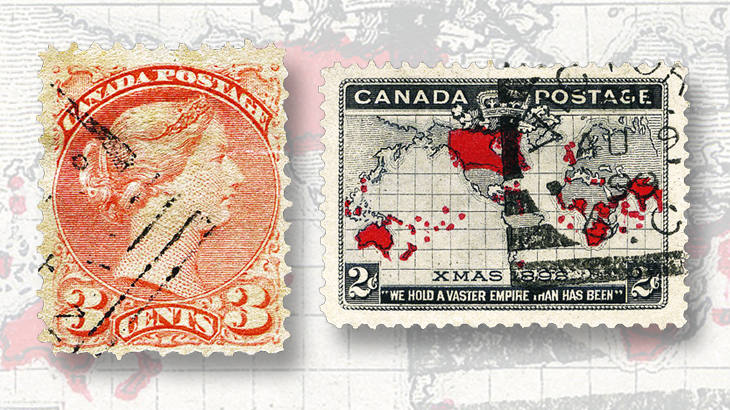 Used stamps present opportunities and challenges for Canada’s squared circle postmark collectors. The origin of the type I postmark on the 3¢ Small Queen stamp at left seems to be unknowable, whereas all the relevant information from a Victoria, British Columbia, type II cancel has been preserved on the 2¢ 1898 Map stamp at right. 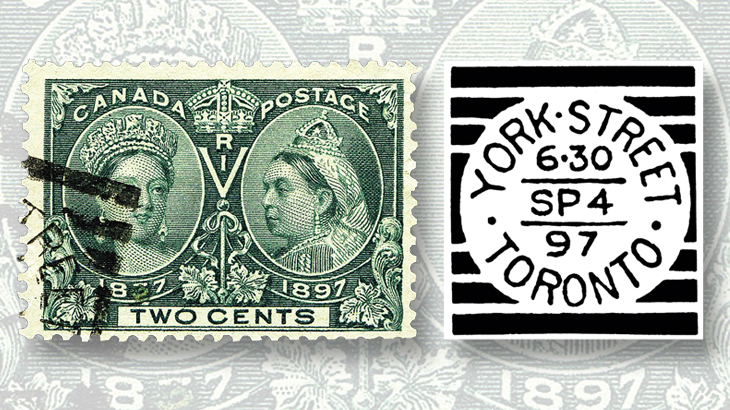 You need not have a complete postmark to accurately identify it providing that the part you do have matches only one known type precisely. That is the case with this 2¢ Victoria Jubilee with a crisp partial strike of Toronto’s “YORK STREET” squared circle, shown from a proof impression at right. 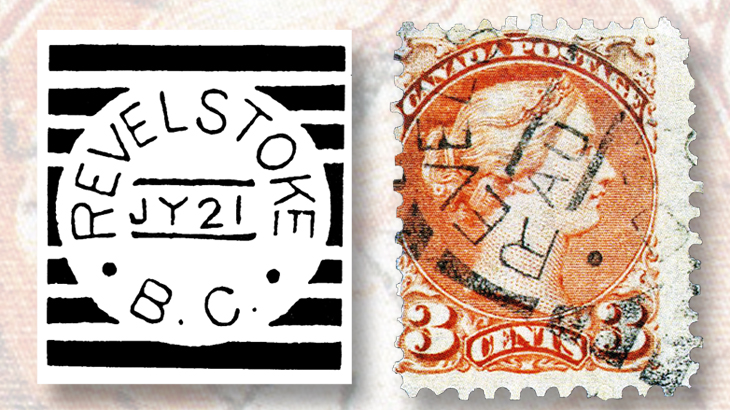 A proof strike of the Revelstoke, British Columbia, squared circle postmark and a photo of the only known used example, found on a common 3¢ Small Queen (Scott 41). The unique cancel fetched $3,750 plus commission in the 2005 Matthew Bennett International auction of Jim A. Hennok’s squared circle collection. 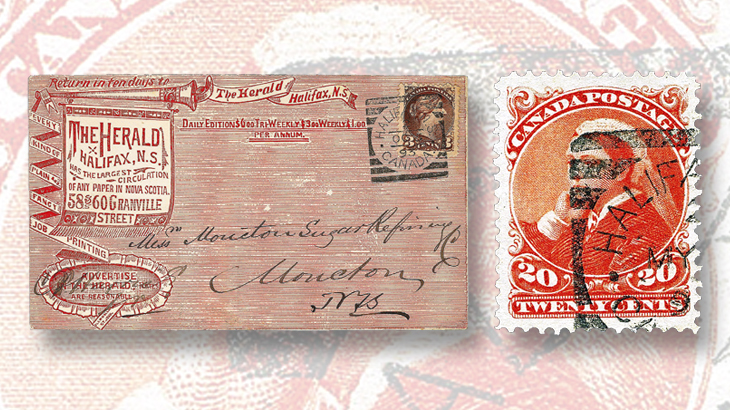 Many squared circle postmarks such as the type II of Halifax, Nova Scotia, can be collected on cover, as on this newspaper advertising cover shown courtesy of Robert A. Siegel Auction Galleries, or on single stamps such as this 20¢ Widow’s Weeds (Scott 46) shown courtesy of the American Philatelic Society. 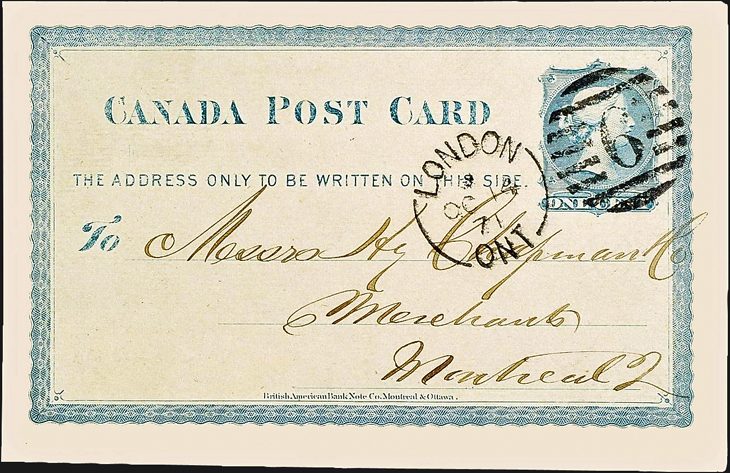 Duplex handstamps, one half of which canceled the stamp, the other half showing the post office and date, were rather large and ungainly compared to the squared circle handstamps that replaced them. 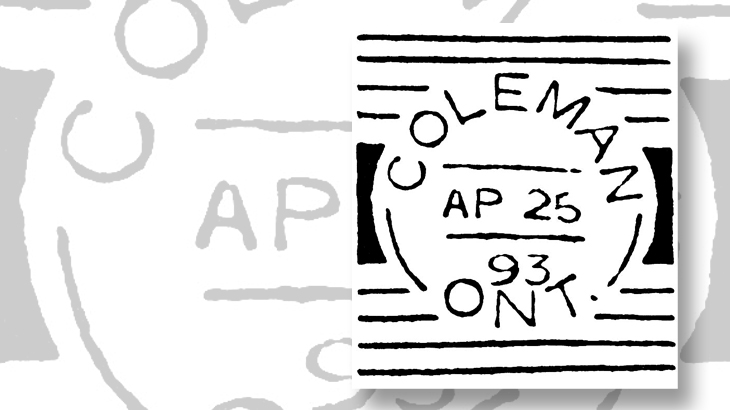 Type I squared circle postmarks had eight thin horizontal lines as well as thick parentheses around the datestamp to cancel postage. This one from Coleman, Ontario, is the rarest, represented by this strike from the proof book of the Ottawa company that made the handstamp.
Previous
Next

Squared circle postmarks originated in Great Britain in 1879 as an improvement upon duplex handstamps.

In a duplex device, one part canceled the stamp, while the other recorded the date and post office. Unfortunately, duplex cancels could be awkward to ink, to apply, and to maintain.

Shown nearby is a 1¢ Victoria postal card with an 1871 duplex cancel from London, Ontario. The right part of the duplex cancels the printed stamp, while the left half displays the date and the city of origin. But it’s a big handstamp — so large it obscures the addressee’s name — yet another drawback to the duplex design.

Squared circle postmarks centered the datestamp in a single device, surrounded by a rectangular area of inked lines or heavy bars to make postage stamps it canceled impossible to re-use. To many, this smaller all-in-one postmark looked better, too.

Squared circles soon canceled stamps in the states of Australia, much of British Africa, India, and New Zealand, and later in locales well beyond the British Empire, including Brazil, the Netherlands Indies and Antilles, Hawaii, Italy, and even far-flung cities such as Madrid and Shanghai.

This popularity seems to have inspired Canada’s first squared circle, a straight-line “OTTAWA” design in an 18-millimeter circle, used in the Canadian capital in 1880-81. It would be a dozen more years before the two standardized square circle designs appeared throughout Canada.

A simple but helpfully illustrated introduction to squared circles appears in the annual Unitrade Specialized Catalogue of Canadian Stamps, which also gives relative rarity factors for some post offices. But the handbook of choice for this subject has to be the 329-page 2001 fifth edition of The Squared Circle Cancellations of Canada edited by John S. Gordon of the Squared Circle Study Group of the British North America Philatelic Society.

Type I squared circle postmarks introduced in Canada in 1893 used thin horizontal lines above and below to outline the circle in which the date and post office were recorded.

This is an extremely rare postmark. The study group gives it a rarity factor of 220, by far the rarest of the type I squared circles.

Starting with the 1981 fourth edition of The Squared Circle Cancellations of Canada, the quantities known for these postmarks are based not on the opinions of “a committee of advanced collectors” as was the case for earlier editions, but instead on “quantities reported on roster forms by collectors … a less subjective approach.”

Coleman was a hamlet of 100 souls, “near York Station” on the Grand Trunk Railroad, 5 miles east of Toronto.

The only known examples of its type I postmark were sold in Matthew Bennett’s Dec. 2, 2005, auction of the squared circle collection of dealer and collector Jim A. Hennok.

The first of a much larger number of type II squared circles, identifiable by the heavy black horizontal bars in the postmark, also were introduced in 1893, but many didn’t enter service until 1894-96.

A well-struck 1898 Windsor, Ontario, type II canceling a 1¢ Victoria Numeral stamp (Scott 75) on a private postcard is shown nearby.

There were 50 type II squared circles used in the maritime provinces of Nova Scotia, New Brunswick and Prince Edward Island; 40 in Quebec; and 53 among the western provinces of Manitoba, Saskatchewan, Alberta, and British Columbia (including eight in the administrative district of Assiniboia, most of which was absorbed by Saskatchewan in 1905).

As with type I, however, the lion’s share of the type II squared circles, 168 in all, went to Ontario.

An additional 11 type II squared circles were assigned for use by the Quebec & Campbellton Railway, the Napinka & Winnipeg Railway, and the Souris & Winnipeg Railway. All three of the squared circle handstamps follow the abbreviation or name of the railway with “M.C.,” which I assume means “Mail Car.” (If I’m wrong about that, please let me know.)

Both type I and II squared circle devices were manufactured by Pritchard & Andrews of Ottawa.

All but a handful of these squared circles are illustrated in the study group handbook from crisp strikes in the proof books of that firm. By a stroke of good fortune, the first of these proof books was rescued from a trash pile by some eagle-eyed scholar, and the book was taken care of for years by the Philatelic Foundation of New York.

A fine newspaper advertising cover from the Herald of Halifax, Nova Scotia, to a sugar refinery in Moncton, New Brunswick, with a somewhat oxidized 3¢ Small Queen stamp (Scott 41) tied by a type II Oct. 5, 1893, Halifax squared circle postmark is shown nearby.

Also pictured is another Halifax type II cancel, postmarked in May but with the date and the second digit of the year missing, struck on a 20¢ vermilion Widow’s Weeds definitive stamp (Scott 46).

This demonstrates the two basic ways in which these postmarks are collected.

An excellent middle course is on Canadian postal cards where the completely flat surface and good-quality stock often permit a near proof-quality impression.

As the handbook states, “Some of the best-quality strikes for quite a few towns occur on these cards.”

The scarcer the postmark, of course, the less likely you’ll find it on cover, and the more likely you’ll pay handsomely for it if you do. In fact, many squared circle rarities are known exclusively on single stamps.

The American Philatelic Society was kind enough to allow me to scan three stamps that show the challenges and rewards for those who hunt through used singles.

The 3¢ bright vermilion Small Queen stamp at left (Scott 41) clearly was canceled by a type I handstamp, and may have been used in 1894, but that’s all we’ll ever know about it.

By contrast, the 2¢ 1898 Map stamp (Scott 85) records every detail of the type II Aug. 9, 1899, Victoria, British Columbia, postmark that canceled it, great for the squared circle collector.

Sometimes accurate identification is possible even when it seems unlikely. The 2¢ green Victoria Jubilee stamp (Scott 52) shows only five letters, “TREET,” in about one-fifth of a type II cancel that appears on it.

There are seven different postmarks named for post offices on Toronto thoroughfares. Two of these are avenues, one is “QUEEN ST. EAST,” two others use the “ST.” abbreviation as well, leaving only two that end in “STREET.” Of these, only the layout of the “YORK STREET” proof strike shown to the right matches the lettering on the 2¢ stamp.

Persistence pays, as the final illustrations demonstrate. The first is a Revelstoke, British Columbia, type II squared circle from the proof book. Its rarity factor is 250, with only one example known.

That postmark, struck sideways on the poorly centered 3¢ Small Queen stamp seen alongside, sold for $4,312.50 including the 15-percent buyer’s premium in Bennett’s 2005 auction of Jim A. Hennok’s squared circle collection.

What would this stamp have been worth without that one-of-a-kind cancellation?