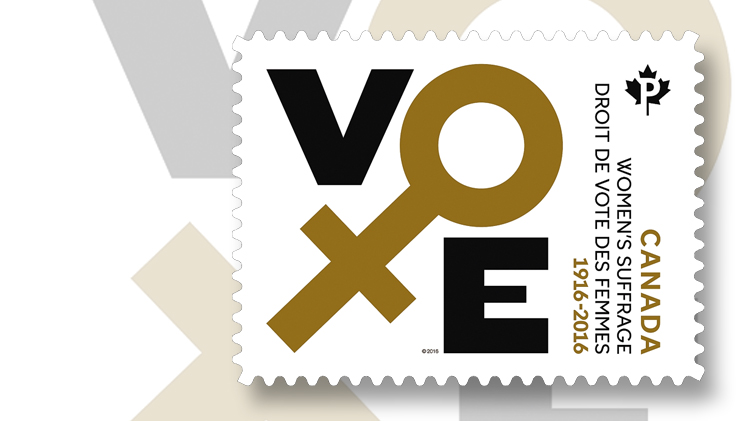 This new stamp celebrating the 100th anniversary of women’s right to vote in Canada uses the traditional symbol for womanhood to send a simple message in black and gold: “VOTE.” 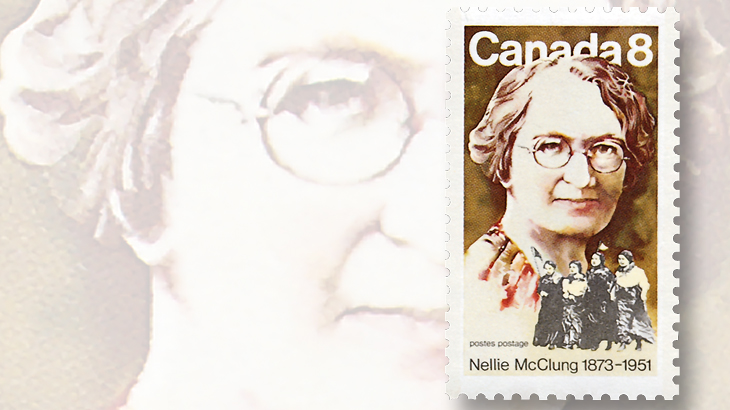 Canadian feminist, satirist, author, and social activist Nellie McClung was honored with this 8¢ stamp on the centennial of her birth in 1973. 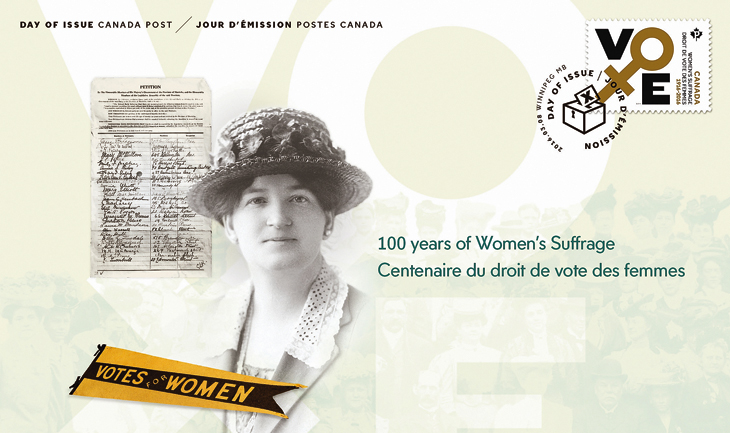 Canada Post’s first-day cover for the Women’s Suffrage stamp bears a ballot box March 8 postmark from Winnipeg, Manitoba; a page from the 1915 Manitoba petition to give women the right to vote; a “Votes for Women” pennant; and a portrait of suffragist wo 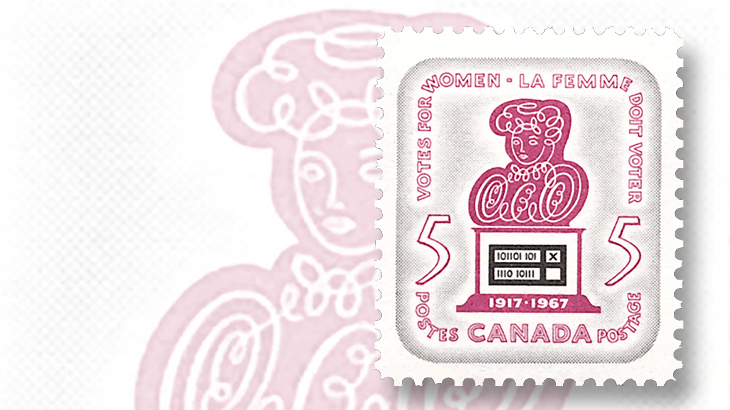 Canada was commemorating a different piece of legislation in 1967 when it marked the 50th anniversary of women’s suffrage with this 5¢ Votes for Women stamp.
Previous
Next

Designed by Tetro Design Inc., the 32-millimeter by 24mm stamp uses the familiar Venus/Aphrodite symbol of womanhood to form the letters “O” and “T” in the word “VOTE,” with added text noting the dates of the centennial.

The women’s suffrage movement had strong roots in the late 19th century, particularly in the growth of the Woman’s Christian Temperance Movement, which held that women at the polls would be indispensable to the success of alcohol prohibition.

However, the arrival of World War I, in which women in great numbers first had the opportunity to show what they could accomplish in Canadian offices, factories, and hospitals, greatly strengthened the call for sexual equality in the home, on the job, and at the ballot box.

Before suffrage became national, it was provincial, beginning in Manitoba where the right for women to vote had been proposed as early as the 1870s.

The Canadian suffrage movement’s earliest success took place on Jan. 28, 1916, when the women of Manitoba became the first to have both the right to vote for and the right to hold provincial office.

Manitoba’s neighbors to the west, Saskatchewan, British Columbia and Alberta, followed suit on March 14, April 5 and April 19, respectively, and women in Ontario could vote in provincial elections beginning April 12.

In May 1918, federal suffrage for Canadian women was granted under the Act to Confer the Electoral Franchise upon Women. The new law took effect on New Year’s Day 1919. However, it was not until 1960 that all women regardless of ethnic or indigenous status were eligible to fully participate in Canada’s political process.

One of the keys to Manitoba’s success as the first province to endorse votes for women was Nellie McClung.

On this FDC, McClung’s youthful portrait is superimposed on an image of the 1915 petition to the government of Manitoba that helped secure the right to vote there, accompanied by a black and gold “Votes for Women” pennant, one of the artifacts currently on display in a women’s suffrage exhibit titled “Nice Women Don’t Want the Vote” at Winnipeg’s Manitoba Museum.

Winnipeg is also the source of the first-day cancel depicting a ballot and ballot box. It was in that city in 1914 that McClung and her colleagues from the Manitoba Political Equity League staged a satirical performance of a female-only mock parliament at Winnipeg’s Walker Theatre.

McClung also appeared on an 8¢ commemorative in 1973, celebrating the 100th anniversary of her birth (Scott 622).

As noted previously (Linn’s, Dec. 21, 2015, page 53) in an article about the 2016 program, Canada’s 1967 5¢ Votes for Women stamp (Scott 470) marked a different anniversary, the 50th anniversary of the first time some women were permitted to vote in Canada’s federal elections.

However, this stamp commemorated the narrow and inarguably paternalistic Military Voters Act of Sept. 20, 1917, which enabled only women who were British subjects and had close relatives in the armed forces to vote on behalf of their male relatives in federal elections.