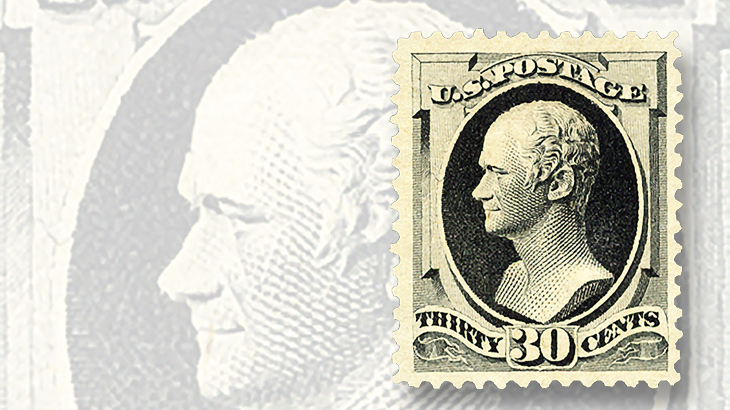 The first session of the April 12-13 Cherrystone public auction in New York City will include this unused 30¢ greenish black Alexander Hamilton stamp from the 1880 special printing. 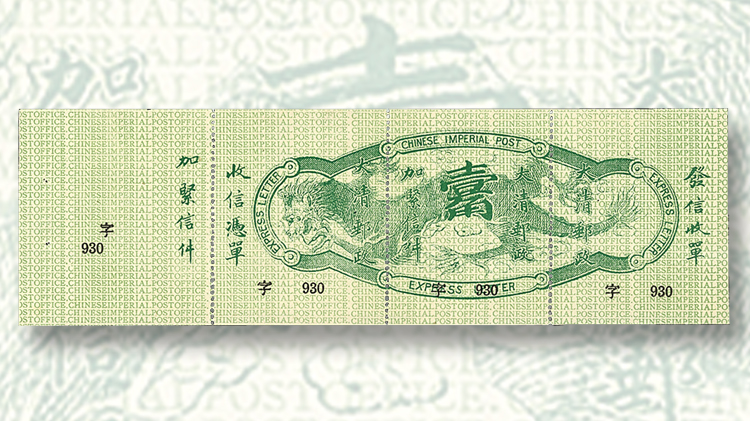 An unused example of China’s 1905 10¢ four-part special delivery stamp (Scott E1) will be offered during the April 12-13 Cherrystone public auction to be conducted at the firm’s galleries in New York City.
Previous
Next

Cherrystone Philatelic Auctioneers will present its Rare Stamps and Postal History of the World auction April 12-13 at the Cherrystone galleries in New York City.

The public auction will offer 1,716 lots of material from the United States and worldwide, including stamps, postal stationery, postal history, proofs and essays, large lots and collections, and more.

The sale opens at 10 a.m. Tuesday with individual lots of U.S. material, starting off with three examples of the 1847 5¢ Benjamin Franklin (Scott 1) used on covers to New York.

An unused example of the 30¢ greenish black Alexander Hamilton stamp from the 1880 American Bank Note Co. special printing (Scott 201) is presented without gum as issued. The stamp is described by Cherrystone as exceptionally well centered with wide margins, fully intact perforations on all sides and with a deep rich color; “seldom seen in such condition, certainly among the finest in existence.”

The quantity known for this issue is just 44, Cherrystone notes, citing a Siegel census that states only 10 examples are confirmed as sound, and “only seven of these have decent centering.” Another 18 stamps need to be re-examined for condition, but “only a handful” have nice centering.

The example in Cherrystone’s auction is accompanied by a 1992 certificate from Professional Stamp Experts and a 2004 certificate from the Philatelic Foundation, and is listed with an opening price of $23,000.

U.S. postal stationery collectors will find a number of elusive items in the Cherrystone sale, including two stamped envelopes from the 1874-86 series: an unused partially sealed 3¢ green entire, opened at top (Scott U168) and a used 3¢ green on blue entire (U170).

As scarce as these two envelopes are, the stunning rarity is a used cut square of the 2¢ red on fawn of the 1884 Washington issue (Scott U242), which is listed in the 2016 Scott Specialized Catalogue of United States Stamps and Covers with a value of $25,000. Cherrystone notes it as one of only “3-4 known cut squares,” all of which are used. The opening price for this example is $9,500.

The worldwide material in this auction includes extensive Great Britain and British Commonwealth, plus other Europe, Asia and South America, and a collection of Iran.

A particularly nice back-of-the-book item from China is the unused 1905 10¢ grass green perf 11 Dragon special delivery issue with dragon’s head facing downward (Scott E1). This example bearing serial number 930 has been folded between the stamps in the middle but is unsevered and described by Cherrystone as very fine — and very rare.

The listing for an unused stamp in the 2016 Scott Classic Specialized Catalogue of Stamps and Covers 1840-1940 is $12,000 in italics, signifying that it is an item that trades infrequently and which can be difficult to accurately value.

Cherrystone provides an opening price for this lot of $7,000.

Five lots feature souvenirs of the 1870-71 Siege of Paris in the form of Ballon Monte mail displaying a variety of markings, frankings and destinations.

The most unusual is one franked with the 80-centime laureated stamp neatly canceled with the large Paris star and “34.” The cover, addressed to “St. Petersbourg,” has also been struck with a red boxed “PD” and a black circular datestamp for Paris Avenue Josephine, dated Nov. 12, 1870.

Preprinted “Par Ballon Monte” and further marked “Fr2” in crayon, this intriguing cover is listed with a $14,000 opening.

A broad selection of U.S. and worldwide large lots and collections closes out the final Wednesday session.

The auction lots for this two-day sale are listed and described online, with online bidding options available.