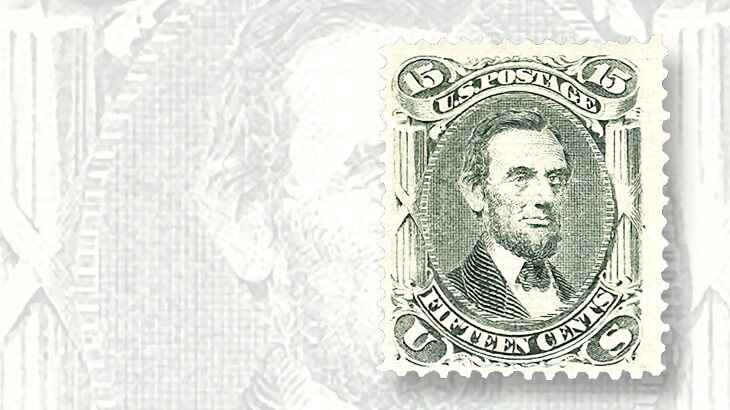 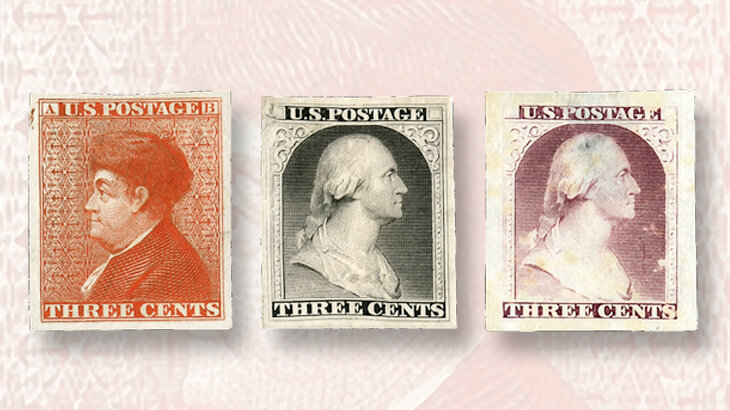 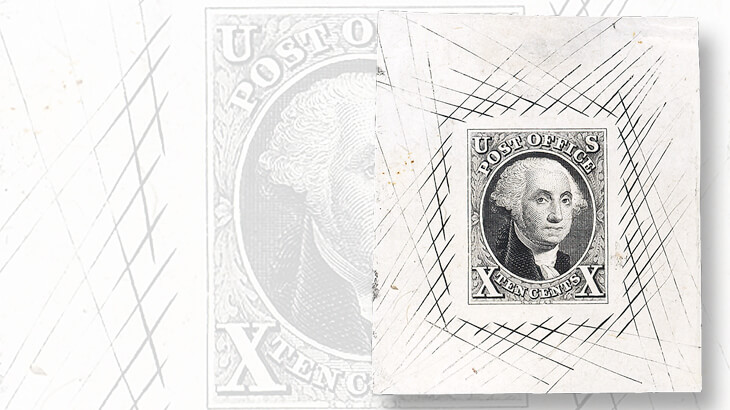 In February, Cherrystone offered a large die proof of the 1847 10¢ George Washington with highly unusual cross-hatching intact around the stamp. Proofs usually have these markings cut off. It sold for $690. 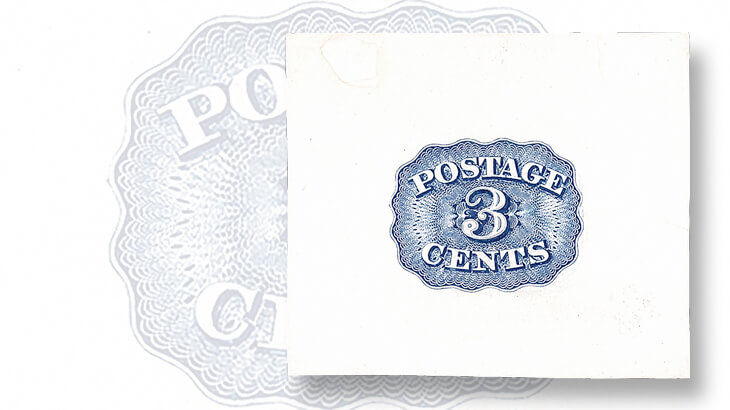 One of four essays of a striking numeral design prepared by a banknote-engraving firm called Bald, Cousland & Co. Cherrystone sold the lot of four for $2,645 in February.
Previous
Next

With fewer of the big-dollar sales of United States stamps in recent weeks, we can turn instead to some interesting smaller-dollar items.

Cherrystone Auctions held sales of U.S. and worldwide stamps in New York on Jan. 12-13 and again on Feb. 23-24. Both sales offered ranges of proofs and essays of 19th-century stamps at comparatively affordable price levels.

A profile of Franklin, the first American postmaster general, in his trademark beaver-pelt hat, is set against an intricate, machine-turned background pattern with “U.S. Postage” above and “Three Cents” below. The design, thought to have been produced by Gavit & Co. of Albany, N.Y., includes the check-letters “A” and “B” in the upper corners, a nod to the British method of deterring fraud by using corner letters to make every stamp in a sheet different.

Two other essays in the lot showed George Washington in an ornate, arched frame, with the same lettering as the Franklin design, in black on India paper sunk on card, and in red-violet on India paper (Scott 11-E4a and 11-E4b, respectively).

The trio sold for $264.50, including the 15 percent buyer’s premium Cherrystone adds to all lots. Several other lots of early U.S. essays went for similar amounts.

The January sale also included an unused, original-gum 15¢ Abraham Lincoln stamp of 1867, with an E grill impressed into the paper as an experimental way of preventing reuse (Scott 91). Fresh and reasonably well centered, it brought $8,625.

These striking diagonal lines, arrayed unevenly in the manner of a very bad haircut, were likely applied to allow excess ink to move away from the vignette, producing a cleaner impression of the die. Often, these proofs are cut down, reducing or removing the cross-hatching. The intact one offered by Cherrystone sold for $690.

A group of four essays tried out a handsome numeral design, with the words “Postage 3 cents” against a complex, machine-turned background, in black, dark brown, scarlet, and blue on white glazed paper (Scott 11-E15c).

These essays were produced by the banknote-engraving firm of Bald, Cousland & Co., of New York and Philadelphia, possibly when the firm was competing for a contract to print postage stamps. The lot sold for $2,645.