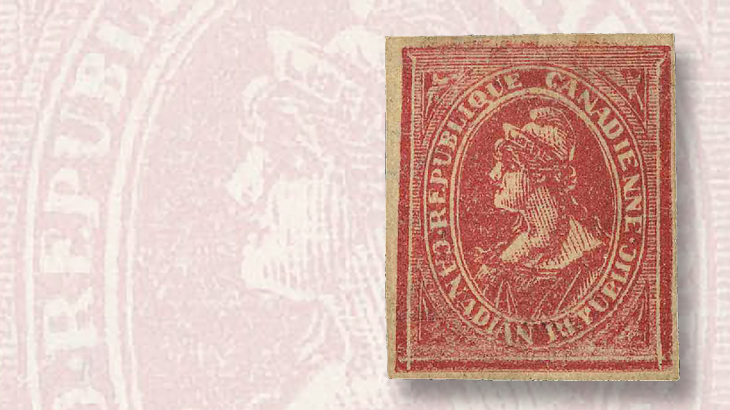 Among the more unusual items in the Feb. 19-20 Eastern Auctions sale in Halifax were two essays purported to date from the time of the 1869 and 1885 rebellions led by Louis Riel. This example, on unwatermarked paper, sold for $1,100.

Eastern Auctions, in Halifax, held a sale Feb. 19-20 of British Commonwealth stamps and postal history that also included one of Canada’s St. Lawrence Seaway inverts — in this case, perfectly centered and never hinged. It sold for $6,850, including the firm’s 15 percent buyer’s premium.

A couple of mysterious essays for a stamp inscribed “Republique Canadienne – Canadian Republic” were said to date from the time of Louis Riel’s rebellions. Riel led two unsuccessful uprisings, first in 1869 and again in 1885, of the mixed-race Metis people against Canada’s newly established central government.

Next to nothing is known of the origin or fate of these essays, although the auction firm cited one 1944 source that dated them to the first uprising.

The sale catalog noted that fewer than 10 examples are known in red. One, on watermarked paper, sold for $1,100, while the other, on unwatermarked paper and with the lower left corner slightly clipped, got $770.

Both Riel rebellions were put down by military force. A soldier’s letter sent to England at the 2¢ concessionary rate by a rifleman with the 1st Battalion Rifle Brigade in the summer of 1870 is reportedly the only known 2¢ soldier’s letter from the first Riel rebellion. Franked with a 2¢ “Large Queen” and postmarked in transit in Montreal, it fetched almost $12,000.