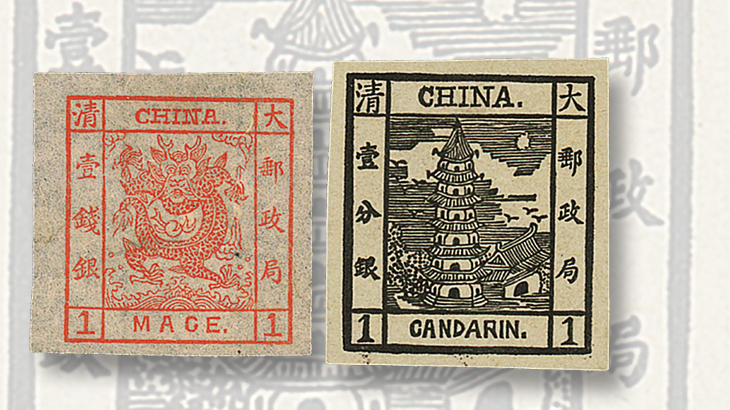 Other striking items from the Spink auction of the Mizuhara collection included a copperplate die proof of the 1-mace Dragon in vermilion on soft pelure paper (left), which sold for $216,000, and a printed essay of the pagoda design in black on wove paper 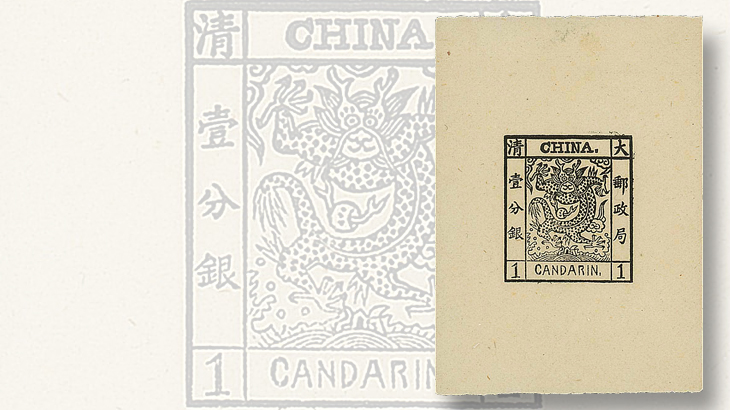 This rare dragon design proof, on stout wove paper, clearly shows four small circles near the dragon’s lower left foot, where later proofs and the issued stamps have only two or three, depending on the denomination. One of just two such proofs known, it s 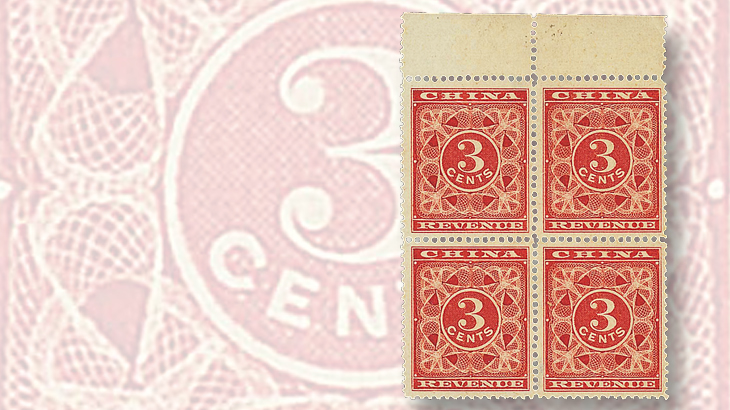 Among the China Red Revenue items in the Mizuhara sale conducted by Spink was this unoverprinted top-margin, original-gum block of four that sold for $648,000. 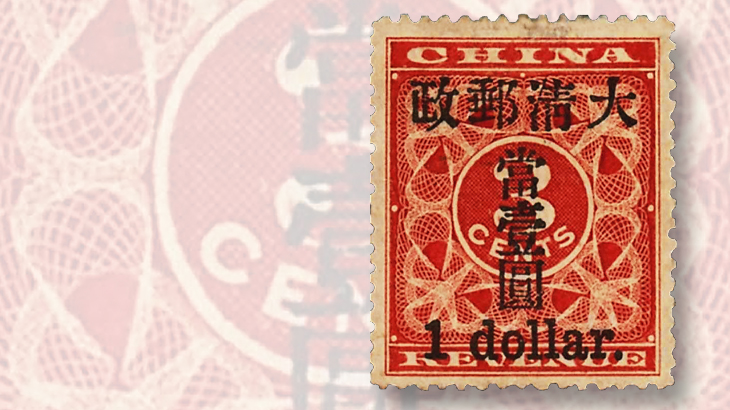 Two overprinted $1 Red Revenue stamps were offered in the Mizuhara sale, apparently once joined as a pair. The first, with some minute blemishes, went for $555,000, while the second (shown), still imperfect but in better shape than the first, brought just 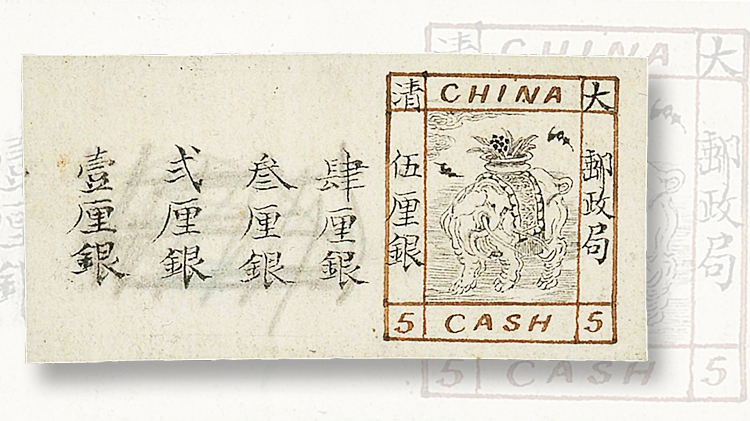 A ceremonial elephant appears on this hand-painted essay from the Mizuhara collection that sold for $463,000 during the January Spink sale in Hong Kong. 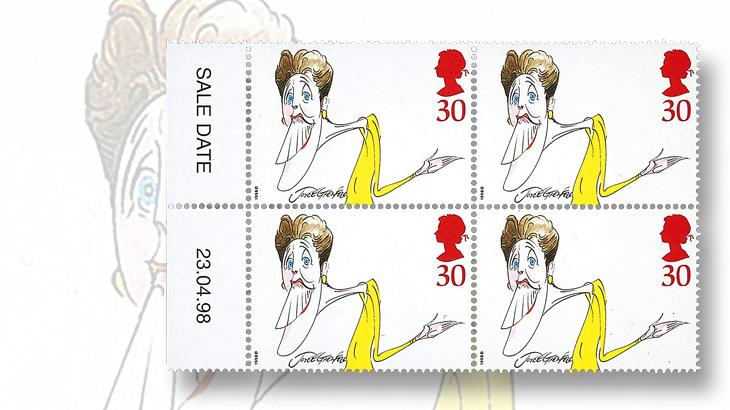 This mint marginal block of four of Great Britain’s Comedians stamp showing a caricature of Joyce Grenfell, prepared with a denomination of 30 pence although it was actually issued at 37p, sold for $3,500 at the Spink sale in London. The Comedians stamps 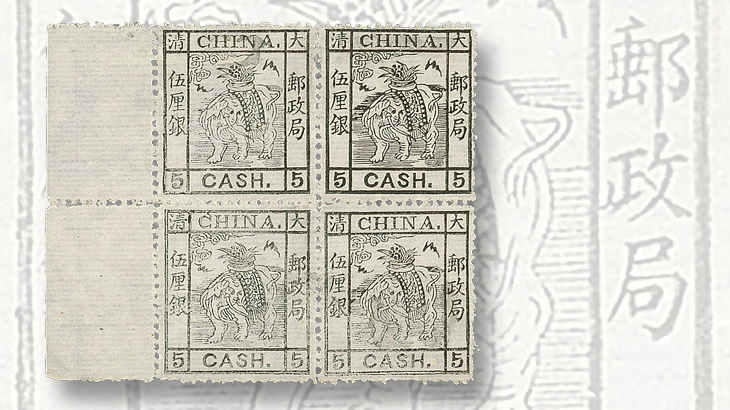 This proof block of four of the elephant design for China’s first stamp issue from the Mizuhara collection, printed in gray-black on thin “cigarette” paper, realized $170,000 in Spink’s January sale. 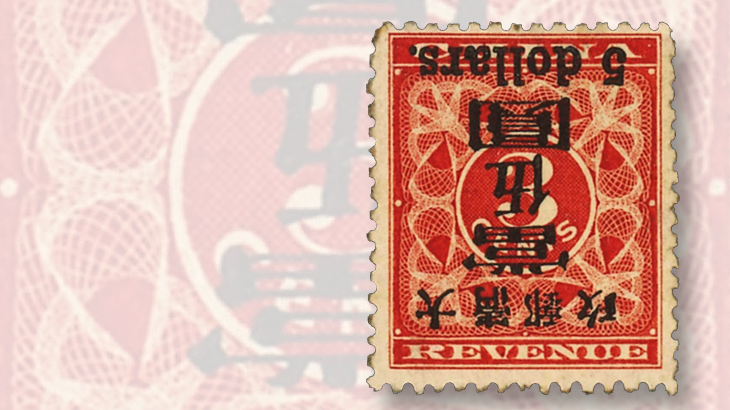 A $5 Red Revenue overprint with inverted surcharge (Scott 85a), unused and regummed and comparatively well centered for this scarce error, sold for about $139,000 in the Mizuhara sale held in Hong Kong. 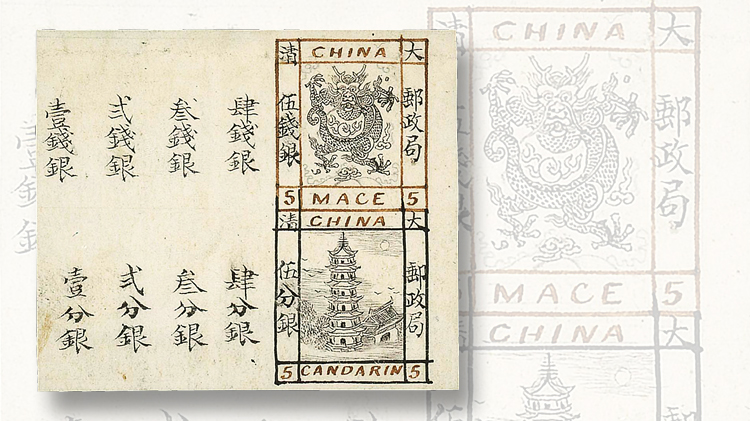 The Spink auction of the Mizuhara collection also featured a number of handpainted essays, including this striking example illustrating a dragon and a pagoda that sold for $618,000. 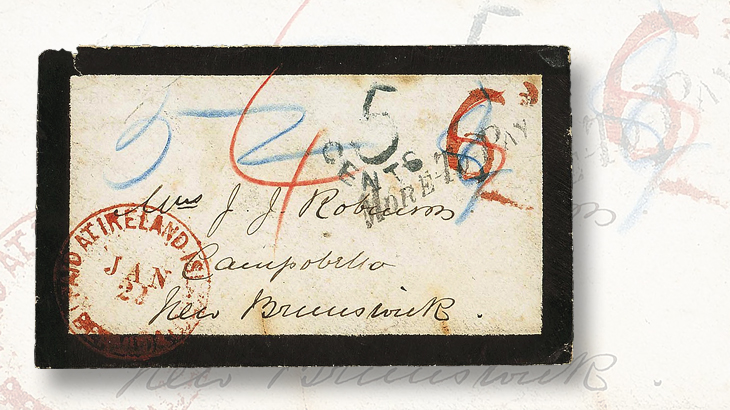 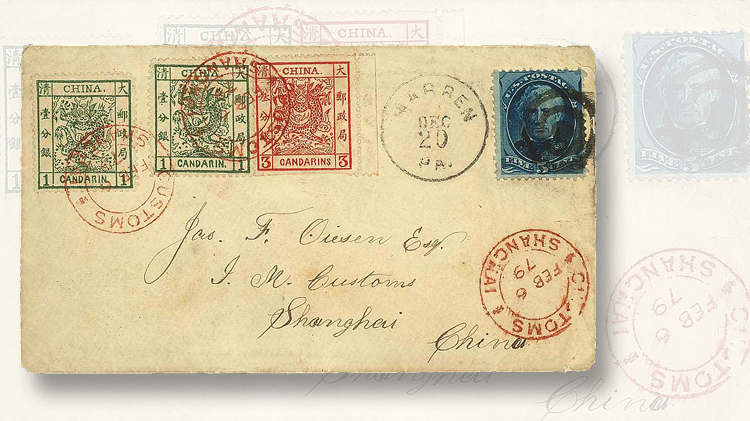 This attractive 1878 mixed-franking cover from Warren, Pa., to Shanghai, the earliest inbound cover to China bearing Large Dragon stamps, was hammered down for $740,000 — the top realization for a postal history item in the Spink sale of the Mizuhara coll 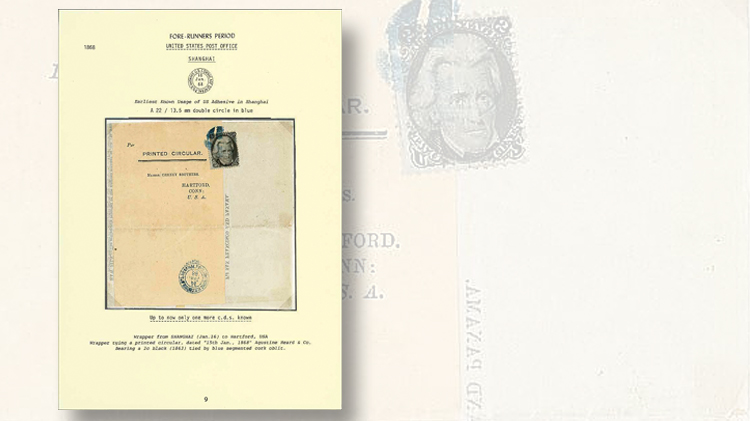 Among the many highlights of Spink’s Jan. 17 sale in Hong Kong of the Meiso Mizuhara collection of Chinese Customs Posts is this printed circular and wrapper franked with a 2¢ Andrew Jackson stamp sent in 1868 from the United States consulate in Shanghai
Previous
Next

Spink, in Hong Kong, offered the international award-winning exhibit of Chinese Customs Posts put together by the late Meiso Mizuhara (1924-1993), a longtime leader in Asian philately, on Jan. 17.

The exhibit, last shown competitively in London in 1990, was also displayed in the court of honor at last November’s international stamp show in Taipei.

Leafing through the catalog of this major sale, available online at Spink.com, is like reading a copiously illustrated encyclopedia on the history of China’s early postal systems, which were mainly operated by foreign powers during the Qing Dynasty until 1897.

The importance of the material in this collection was underscored by the prices realized: more than a dozen items broke the seven-figure barrier in Hong Kong dollars, realizing the equivalent of $130,000 or more in U.S. dollars each, while many more realizations translated into healthy five-figure amounts.

Each item is shown with Mizuhara’s own annotations on his original exhibit page, augmented by further historic images and information from Spink’s researchers.

The sale opened, like Mizuhara’s exhibit, with forerunners to China’s own postal system, represented mostly by stampless covers or covers franked with foreign stamps bearing postmarks of foreign-run customs and consular post offices.

A striking wrapper, containing a merchant’s circular from one Augustine Heard, was sent from the United States consulate in Shanghai on Jan. 16, 1868, to Hartford, Conn.

Just visible through the thin paper of the circular are the words “Via San Francisco and Panama” and “Raw silk,” hinting at the tale of global trade that was taking shape even at that early date.

A U.S. 2¢ “Black Jack” Andrew Jackson stamp (Scott 73) in rather good condition is affixed across both the wrapper and the circular, and tied to the wrapper by a rare, blue segmented-cork obliterator. Lower down on the wrapper is a very rare “U.S. Consulate General P.O.D. Shanghai” double-ring circular datestamp, also in blue.

Only one other use of this temporary postmark is known. The U.S. postal agency in Shanghai operated out of the consulate there beginning in 1867, using this makeshift cancellation until a proper one arrived from the United States.

Although the auction description doesn’t mention it, Mizuhara’s write-up notes this represents “the earliest known usage of a U.S. adhesive in Shanghai,” making it a very significant item.

It sold for the equivalent of about $74,000, including the 20 percent buyer’s commission charged by Spink on all lots.

It was additionally franked on arrival in Shanghai on Feb. 6, 1879, with three of China’s first stamp issue, the “Large Dragons”: a 3-candareen orange (Scott 3) and two 1ca dark green (1a) stamps, tied with red “Customs Shanghai” datestamps.

The extra postage was required for local delivery, because China would not become a member of the Universal Postal Union until 1914.

Topping off its qualities, the cover is exceptionally clean and neat, resulting in what the auction house called “an exhibition item of the highest calibre.” It sold for an impressive $740,000, making it the top postal history item in the sale.

Handpainted essays for China’s first stamp issues were another highlight of the sale.

A pair of designs, one showing a dragon and the other a pagoda, were rendered in black and brown with fine brush and pencil on heavy wove paper. The dragon design is denominated in mace (equaling 10 candareens), while the pagoda essay, which was never adopted, shows the value spelled “Candarin” as it appeared on the issued stamps. Additional Chinese characters to the left of each design spell out further denominations. The dragon design is very close to that of China’s first stamp issues (Scott 1-15).

A third essay was offered as the next lot. The auction description noted: “The design features a ceremonial elephant carrying a pot of growing cycas and there are two bats flying in the sky. These are auspicious symbols: the elephant signifies great happiness, and the Chinese name for a bat is ‘fu’, which sounds similar to the word for happiness. The cycas convey the significance of perpetual change.”

The identity of the artist behind these designs is unclear. For many years, it was assumed to have been a foreigner, in part because the pagoda has six levels, which is inaccurate (pagodas must have an odd number of stories), but the prime suspect, an American named Hosea Ballou Morse who served in the Imperial Maritime Custom Service, denied being the one.

It is now thought that, erroneous pagoda notwithstanding, the essays must have been done by a Chinese artist.

Some printed trials of the painted designs were offered next. A copperplate die proof of the 1-mace Dragon in vermilion on soft pelure paper, showing some development from the original painting toward the issued design, sold for $216,000, while a printed essay of the pagoda design in black on wove paper fetched $200,000.

Similar proofs of the elephant design were offered, as well as a block of four printed in gray-black on thin “cigarette” paper, which went for $170,000. The block, with minor faults, was one of few surviving blocks from an original pane of 50.

The Scott Classic Specialized Catalogue of Stamps and Covers 1840-1940 includes a somewhat puzzling note after China’s first issue: “Imperforate essays of Nos. 1-3 have an extra circle near the dragon’s lower left foot. Examples with the circle completely or mostly removed are proofs or unfinished stamps.”

The story behind this tiny missing circle was illuminated by the next lot in the Spink sale, a large die proof of the final dragon design:

“When a new seal was sent to an official, it was traditional for him to select and remove a small point in the seal (without damaging the characters). A print of his adopted seal was then filed with the central government in Beijing. In this way, any unauthorised use of the seal before it was delivered to the correct person could be identified. It is believed that, following this tradition, the extra circle in the design (in the lower left corner) was placed there as a security device to detect any stamps which may have been fraudulently produced. A circle was removed by the official to whom the dies, or cliches, were sent. This one official decided which of the circles would be removed.”

The rare proof, on stout wove paper, clearly shows four small circles near the dragon’s lower left foot, where later proofs and the issued stamps have only two or three, depending on the denomination. One of just two such proofs known (the other has been cut down to size), it sold for about $262,500.

The distinctive “Red Revenues,” provisional definitive stamps that were the first to be issued by China’s own government in 1897, made up another significant portion of the Mizuhara sale.

The underlying red stamps, inscribed “China 3¢ Revenue,” were printed in England for use on customs documents. But when the 3¢ denomination proved unneeded, and an initial order of postage stamps for the new Chinese Imperial Post was delayed at the Japanese printers, authorities made do by overprinting the 3¢ revenues with Chinese inscriptions and a new denomination in English.

Outside of archives, just 80 examples survive of the unoverprinted Red Revenue stamps (mentioned and valued in a note after Scott 85), with just a handful of blocks among them.

A top-margin, original-gum block of four, lightly hinged and with a couple of tiny gum thins where old hinges were once removed, was described as a “fresh block in a very rich color.” It sold for $648,000.

The $1 overprints occur on the Red Revenues with two different types of Chinese characters in the center: small and large (or, to be precise, narrow and wide). The large $1 overprint (Scott 84) is hard to get, but the small $1 (83) is downright scarce, with just 34 examples thought to have survived out of the initial two panes of 25 that were produced, all but one of them unused.

Two examples were offered in the Mizuhara sale, apparently once joined as a pair. The first, with some minute blemishes, went for $555,000, while the second, still imperfect but in better shape than the first, brought just over $800,000.

A $5 Red Revenue overprint with inverted surcharge (Scott 85a), unused and regummed and comparatively well centered for this scarce error, sold for about $139,000.

Spink held a sale in London on Jan. 27-28 that was previewed on the front page of Linn’s Jan. 25 issue, featuring a rare Bermuda cover with a unique “Paid at Ireland Island” datestamp.

Various other rate markings track the letter’s progress to its destination in New Brunswick (now part of Canada).

The black-bordered mourning cover, sent in 1863 to a Mrs. J.J. Robinson in New Brunswick by her son, a Royal Navy midshipman, only came to light in a trove of family correspondence in the 1990s.

As the American-style Ireland Island datestamp had never been recorded before, extensive research was undertaken to prove it was genuine, culminating in the unearthing in 2000 of evidence for the purchase of the canceling device from the United States by Bermudian postal authorities.

The cover sold for about $23,500, including premium, besting its presale estimate.

The auction catalog includes a sad footnote: “Midshipman Robinson died late in 1870 at the tender age of 25 whilst serving as a Lieutenant on board H.M.S. Endymion. He was buried at sea in the Sea of Japan.”

Among modern British errors, a mint marginal block of four of the 1998 Comedians stamp showing a caricature of Joyce Grenfell, prepared with a denomination of 30 pence, although it was actually issued at 37p, sold somewhat below its estimate for $3,500.