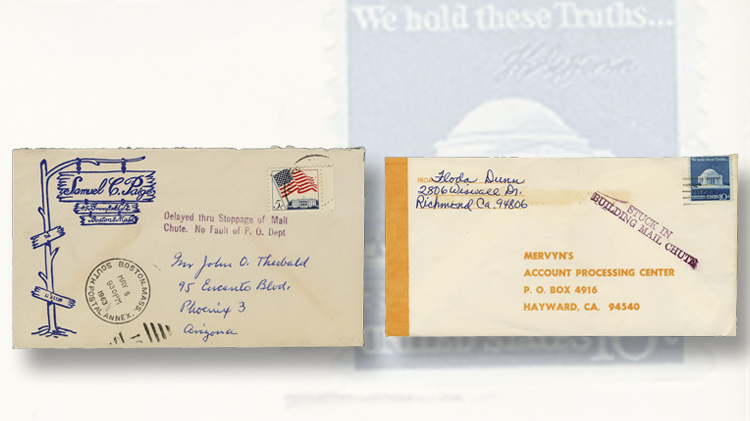 These two examples of clogged mail chute markings on United States mail illustrate one of the reasons that this innovation, first installed in 1884 in the Elwood Building in Rochester, N.Y., eventually went out of style. 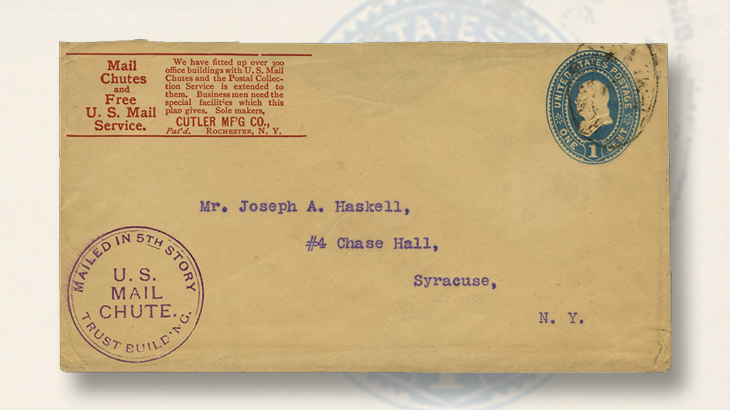 The James Cutler Manufacturing Co. of Rochester, N.Y., held the patent on mail chutes. This 1887 cover contained advertising for the firm.
Previous
Next

Convenience counts, and if you worked in a multi-story office building with a mail chute, you could save considerable time and aggravation by posting mail via a short walk to the elevator. That’s where the mail chute was usually located.

Buildings I worked in starting in the 1960s had them, but as time passed, most of these chutes were closed with a sign saying “no longer in operation.”

One reason for the closures was that mail could get clogged up in the chutes, so much so that the post office had handstamps made up to explain the delay. Two examples are shown nearby. I have seen such markings used as late as 1971.

The original patent for the mail chute was granted to James G. Cutler on Sept. 11, 1883. The first one was installed in 1884 in the Elwood Building in Rochester, N.Y.

The 1887 cover from Rochester to Syracuse, N.Y., shown nearby has an advertising circular from the Cutler Manufacturing Co., as noted in the corner card.

The tiny print reads: “We have fitted up over 300 office buildings with U.S. Mail Chutes and the Postal Collection Service is extended to them. Business men need the special facilities which this plan gives. Sole makers. Cutler Mf’g Co. Pat’d. Rocherster, N.Y.”

More than 1,600 mail chutes were installed in the first 20 years the company was in operation.

If mail markings like this appeal to you, you might consider joining the Auxiliary Markings Club, which produces an excellent quarterly journal in full color, edited by Linn’s columnist Tony Wawrukiewicz. The club also has periodic show-and-tell meetings at stamp shows.

More information can be obtained from the club’s website, or from membership secretary Jerry Johnson, 6621 W. Victoria Ave., Kennewick, WA 99336-7607.