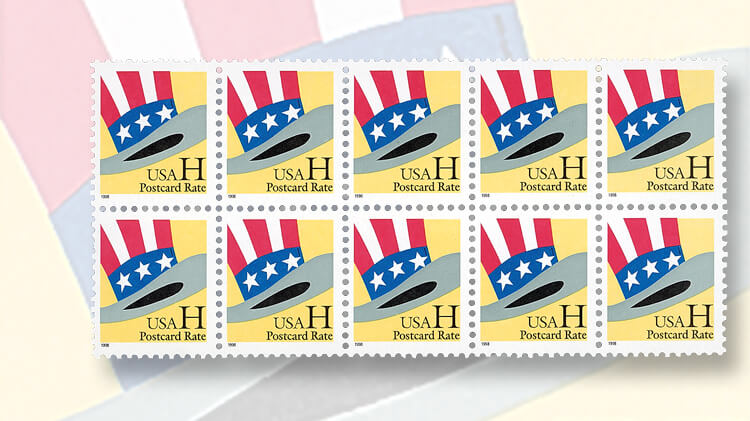 Never issued and very rare as a multiple, a block of 10 “Yellow Hat” nondenominated “H Postcard Rate” stamps sold for $12,980 at Kelleher’s auction in February. 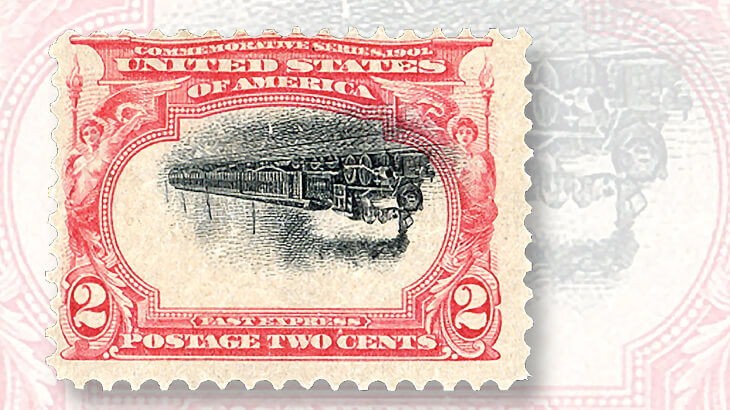 An unused example of an inverted-center 2¢ stamp showing the Empire State Express, from the 1901 Pan-American issue, in “flawless” condition, sold for $29,500 at the February sale conducted by Daniel F. Kelleher. 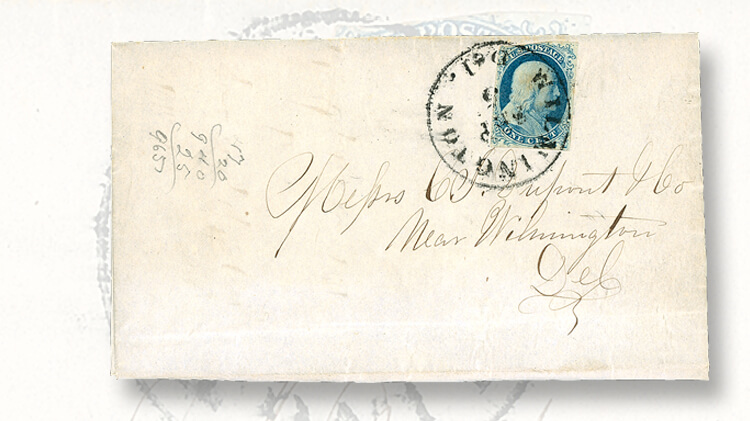 A cover with a single 1851 1¢ type I Franklin stamp, not included in the Wagshal census of single frankings of Scott 5, sold for $17,700 at Kelleher’s sale in early February in Danbury, Conn. 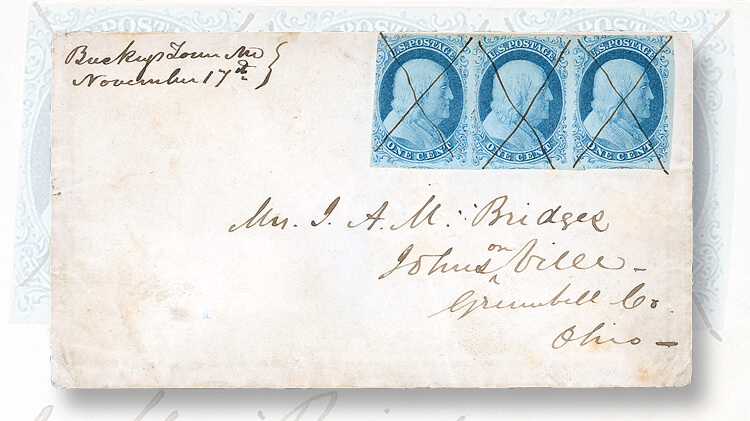 The top item in a February sale at the Daniel F. Kelleher firm in Danbury, Conn., was an 1851 cover bearing a strip of three 1¢ Franklin stamps, one of them type I and the other two type Ib. The cover sold for $47,200.
Previous
Next

The firm of Daniel F. Kelleher held a sale in its Flagship Series at the headquarters in Danbury, Conn., on Feb. 2-4, offering U.S. and worldwide stamps and covers.

The top item was an 1851 cover sent from Maryland to Ohio bearing a strip of three 1¢ Franklin stamps canceled by large, slightly wobbly manuscript X’s. What makes the cover special is the fact that one of the stamps is identified as a type I of that issue, together with two type Ib’s (Scott 5 and 5A).

The various types of the 1851 1¢ stamp are distinguished by the degree to which the scrollwork at top and bottom of the design was cut away or retouched during the make-up of the printing plate. Only one position on the early state of the first plate shows the complete scrollwork, and that stamp is identified by philatelists as the rare type I, of which only some 110 examples are known in all.

The strip on the cover in the Kelleher sale has “large margins virtually all around with adjacent stamps visible at bottom, clearly displaying the key bottom ornaments.”

The cover sold for $47,200, including the 18 percent buyer’s premium Kelleher adds to all lots.

The following lot in that sale was another cover with a single use of the type I stamp, sent within Delaware. The auction description noted that this cover is not included in the late Jerome Wagshal’s census of eight known covers with a single franking of Scott 5. The cover sold for $17,700.

Kelleher also offered some Pan-American inverts: an unused 2¢ Empire State Express (Scott 295a) with disturbed original gum, centered somewhat high but in “flawless” condition, sold for $29,500, while a 4¢ Electric Automobile (296a) with some paper hinge remnants and the bottom edge of the design touching the perforations sold for $28,320.

Another 4¢ invert, handstamped “Specimen” lightly in purple (Scott 296a-S), went for $6,195. About half the known examples have this overprint.

An unused block of 10 of the enigmatic “Yellow Hat” stamp also crossed the auction block at Kelleher.

This nondenominated stamp, inscribed “H Postcard Rate” and with a yellow background to the design that features Uncle Sam’s top hat, came to light around 1998, in small quantities of both mint and postally used examples, despite never having been officially issued.

Due to its unofficial status, the stamp has not been given a numeric listing in the Scott Specialized Catalogue of United States Stamps and Covers, although it is illustrated and described in a note after Scott 3269.

Described by Kelleher as an “incredibly scarce multiple,” the never-hinged block (one stamp has trivial gum faults) sold for $12,980.