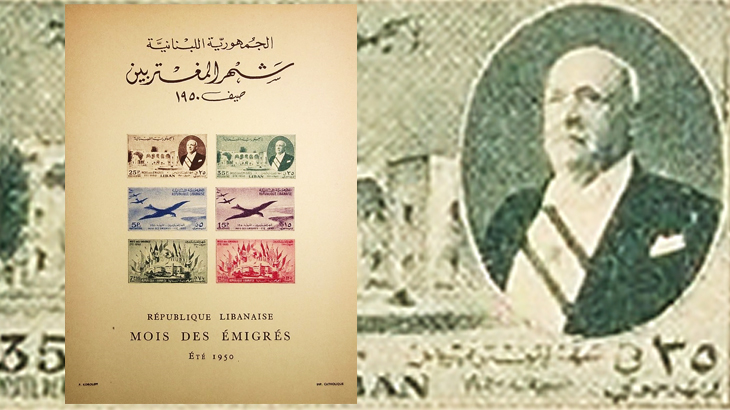 The 1950 Lebanon Conference of Emigrants airmail souvenir sheet of six (Scott C153a) is in demand in mint never-hinged condition and is a good buy in the $50-to-$70 price range.

By the dawn of the 19th century, Lebanese merchants could be found in a number of cities and ports around the Mediterranean Sea.

In the 19th century, emigration from Lebanon increased dramatically, particularly from among the well-educated Christian population. The majority of the immigrants went to the United States and Canada, but not a few also immigrated to Australia, New Zealand, Europe, and South America.

By the outbreak of World War I, fully one-third of the Lebanese population, mostly Christians, had emigrated elsewhere. The level of emigration dropped off sharply during the Great Depression, but resumed after World War II.

On Aug. 8, 1950, Lebanon issued a set of two postage stamps and four airmail stamps (Scott 243-244 and C150-C153) to commemorate the Conference of Emigrants. The design of the two postage stamps depicts the building where the conference was held and flags of the nations from which the emigrants came. Two of the airmail stamps show homing birds, an allegory of emigrants returning to Lebanon for the conference. The other two airmail stamps show the presidential palace with an inset portrait of Lebanese President Bechara al-Khoury.

In addition to the stamps, an imperforate souvenir sheet of six on chamois paper (Scott C153a) was also issued. The 2016 Scott Standard Postage Stamp Catalogue values the souvenir sheet in mint never-hinged condition at $70. There is good demand for this sheet, which has sold recently for as much as $80. We think it is a great buy in the $50-to-$70 price range.