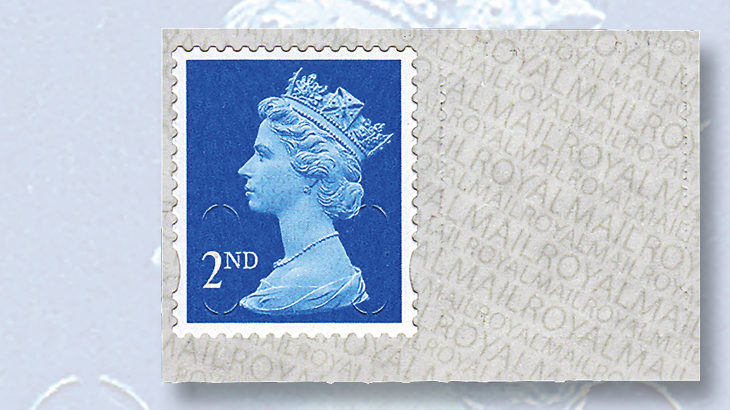 Royal Mail introduced a new security feature for all Machin definitives. The backing paper shows an overprint under the silicone laminate. 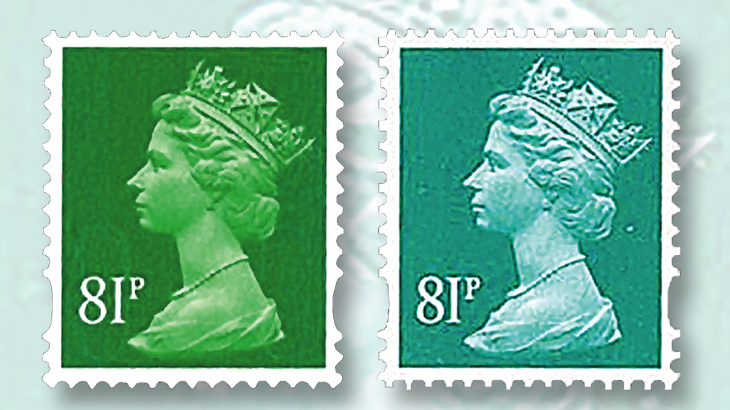 In February 2015, the printer chose the wrong color for the 81p Machin in the Inventive Britain prestige booklet. It should have been holly green (left), not sea green (right). 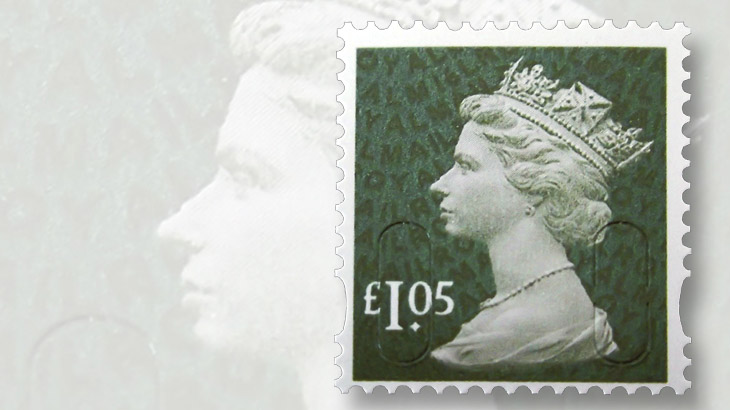 Postal rate changes in Great Britain for 2016 resulted in the need for only one new Machin denomination, £1.05, in the color gooseberry green. 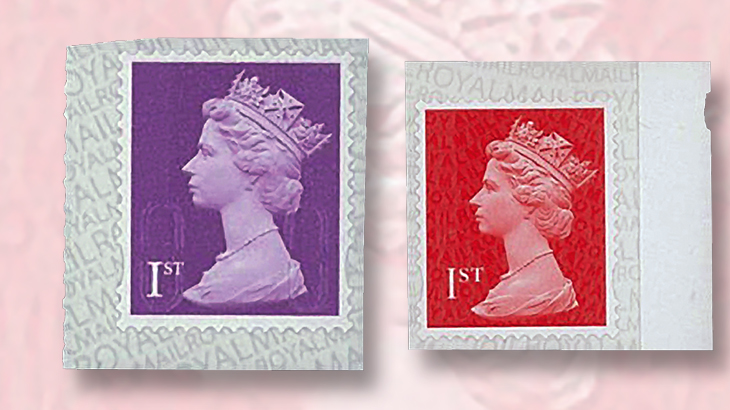 Collectors can collect mint singles with the newly overprinted backing paper evident around the sides of individual stamps.
Previous
Next

Great Britain’s Royal Mail has introduced yet another security feature for its definitive stamps: an overprint on the backing paper.

The overprint reads “ROYAL MAIL” in all capital letters in two sizes and is printed in a diagonal pattern across the backing paper of self-adhesive stamps.

The overprint is showing on the backing paper on the right of the nondenominated second-class blue stamp pictured nearby.

The overprint in no way effects individual stamps. When self-adhesive stamps are peeled away from their backing, they cannot be distinguished from similar stamps that originated on the older plain, white version of backing paper.

The new security text remains on the backing, which is usually discarded.

The new security feature’s purpose is to discourage the counterfeiting of British postage stamps.

Fry continued: “One potential change is to underprint the stamp laminate. This can only be done at the laminate manufacturing stage. The print goes under the silicone layer and therefore allows the print to run under the stamps.”

The new security underprint is incorporated into the papermaking process by the manufacturer, Tullis Russell.

The first security device was elliptical perforations introduced on the high-denomination Castle stamps in 1992.

Elliptical perforations, which the Scott Standard Postage Stamp Catalogue calls “syncopated” perforations, were added to all of Britain’s definitive stamps beginning in 1993.

In 2009, Royal Mail introduced three more features to deter the reuse of uncanceled stamps. The self-adhesive gum was made insoluble in water making it difficult to soak used stamps off paper.

U-shaped die-cut slits also were added at the bottom left and right of individual stamps causing used stamps to self-destruct when attempt is made to peel them off their original envelopes. This prevents the reuse of stamps that are used but are not canceled.

Third, stamps are overprinted with hard-to-see iridescent ink. Two different codes can be embedded in the iridescent overprint.

One is a year code, usually indicating the year in which the stamps were printed.

The other code is a source code indicating booklet (of six, 12, in combination with commemorative stamps, or prestige), business sheet, miniature sheet, or roll. Stamps originating in counter sheets do not bear any special source code.

It has been reported that the new security inscription on backing paper will be printed not only on definitive stamps but also on commemorative stamps. No commemorative issues, however, with SBP have yet been released to the public.

The first stamps on new security backing paper to make it into public hands were examples of the nondenominated second-class blue stamp shown in the first illustration. The earliest date for printing is recorded as Dec. 1, 2015.

Most stamps issued on the new overprinted backing paper will have the year date “16.” Some, however, including the nondenominated first-class red, the first-class red stamp for large mail, the second-class blue, and the first-class amethyst, have last year’s date, “15,” embedded in the iridescent overprint.

Collectors have to decide in what format they want to keep mint examples of these new self-adhesives on SBP.

A pair of stamps with one removed as shown in the earlier illustration displays the overprint on the backing paper. A single stamp, however, usually shows sufficient evidence of the overprinting across the inter-stamp gutters.

On March 29, Royal Mail began charging new rates for some of its services.

First- and second-class rates for both normal and large-sized letters increased by 1 penny, a very slight increase.

There is only one new Machin denomination this year. It is the £1.05 stamp in a color Royal Mail calls gooseberry green.

There also are four new country pictorials for England, Northern Ireland, Scotland, and Wales in the £1.05 denomination.

In February 2015, Royal Mail inadvertently sold an error in color. The 81p stamp in the multi-denomination pane of the Inventive Britain prestige booklet should have been holly green. Instead the printer, Cartor, selected sea green, an incorrect color choice. This comparison shows the difference.

When the 81p denomination was introduced to the Machin range in 2008, it was indeed sea green. But when reissued in 2014, Royal Mail changed the color to holly green, a more emerald shade. Cartor mistakenly chose the older, discontinued color and thereby created a color error.

Because all Inventive Britain booklets contain the stamp printed in the wrong color, it is not of much greater worth by being an error. The prestige booklet is, however, its only source.