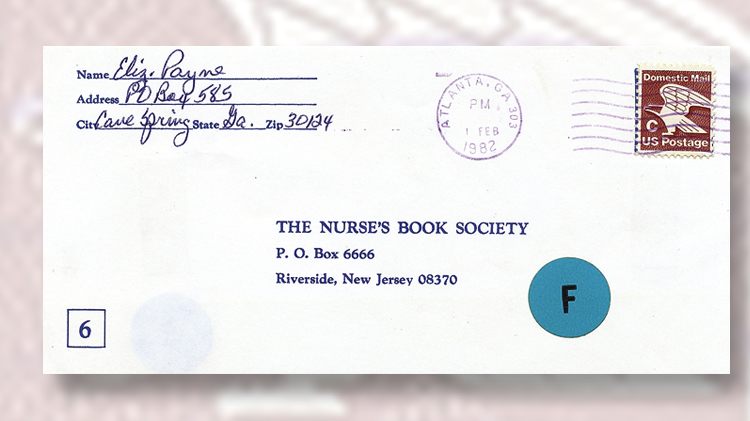 This Feb. 1, 1982, first-class letter has a type 2 blue “F” pressure-sensitive package label affixed, indicating that it was presorted to a business firm; in this instance, The Nurse’s Book Society. Postal history researcher Tony Wawrukiewicz has been una 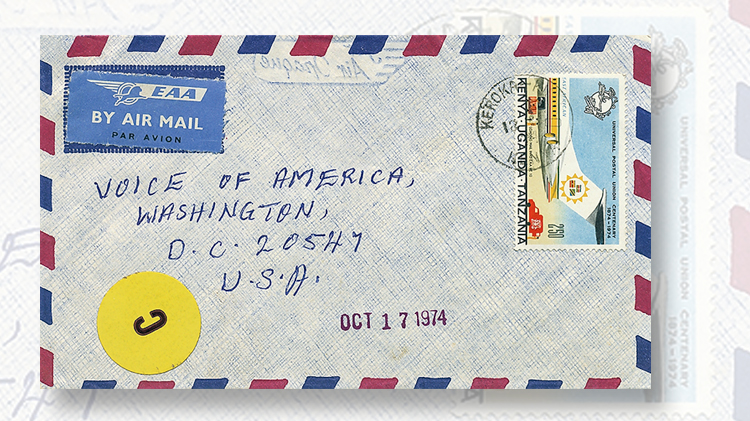 This 1974 airmail letter to the United States with franking from Kenya, Uganda and Tanzania has the type 1 yellow “C” label, indicating presorting all for multicoded cities. Wawrukiewicz sees no reason for this “C” label, as such mail did not originate fr
Previous
Next

Labels used in identifying the first item in a sorted package or bundle for the presorting of the various classes of United States domestic mail were described in my column in Linn’s March 14 issue (page 26), which introduced the pressure-sensitive package labels (PSPL).

A series of pressure-sensitive labels have been used to indicate that the package identified with the PSPL received a certain type of presorting that expedited its delivery.

These packages represented residual bundling that occurred only if there were items left over after presorted trays and sacks were filled.

In this column, I discuss two areas of PSPL use that are still not understood, as well as some areas where I know the sorting to have existed, but where no examples of PSPL on pieces are known to me.

After July 6, 1976, it is clear from the literature (USPS domestic service manuals and the Postal Bulletin) that business-firm (blue label “F”) PSPL were not to be placed on sorted first-class pieces. In spite of this rule, of the five “F” examples I have seen, only one was not a first-class use.

The first cover illustrated here is an example of a first-class use, from the collection of Thomas Breske. It’s a first-class letter postmarked Feb. 1, 1982, paying the up to 1-ounce rate of 20¢ with the nondenominated (20¢) C-rate stamp (Scott 1946). The type 2 blue “F” label affixed to the letter indicates that it was presorted to the addressee business firm, The Nurse’s Book Society.

Another type of cover with a PSPL affixed that doesn’t correspond to any regulation I can find is an incoming foreign cover, such as that pictured in the second illustration, from the collection of John Hotchner.

This circa Oct. 17, 1974, airmail letter to the United States, franked with the 2.50-shilling Kenya, Uganda and Tanzania UPU Loading Mail stamp (Scott 295), has the type 1 yellow “C” PSPL affixed, indicating presorting all for multicoded cities.

I cannot see any reason for this, as such mail did not originate from a U.S. firm, yet John Hotchner and Tom Breske both have a significant number of examples of this type of label use. Perhaps a Linn’s reader can explain this type of use?

Next, I would like to describe four other types of mail for which presorting with labeling has been announced over the years, but for which I have yet to see any examples.

Permitted labeling of bound printed matter was first announced in Postal Bulletin 21372 (Oct. 7, 1982). Only red label “D” and green label “3” presorting were allowed then for this class of mail.

The label sorting of Priority Mail began as of Jan. 24, 1991, announced in Postal Bulletin 21718A of that date. The red label “D” for five-digit packaging and green label “3” for three-digit sorting were allowed then.

To repeat: for these latter four classes of mail where sorting and labeling occurred at various times, I have seen no examples with PSPL affixed. If anyone has seen examples, I would appreciate knowing about them.