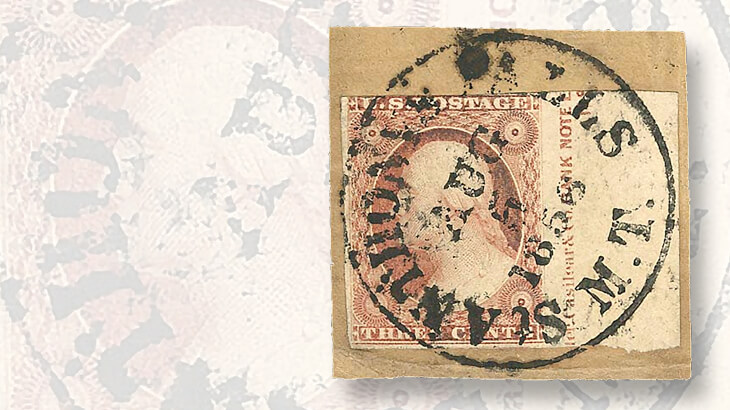 Regency-Superior held an Internet-only auction on Feb. 15, with some brisk bidding for a used imperforate 3¢ Washington dull red type I of 1855 tied to a piece of an envelope with a Minnesota Territory datestamp. Cataloged at $15, it sold for $138. 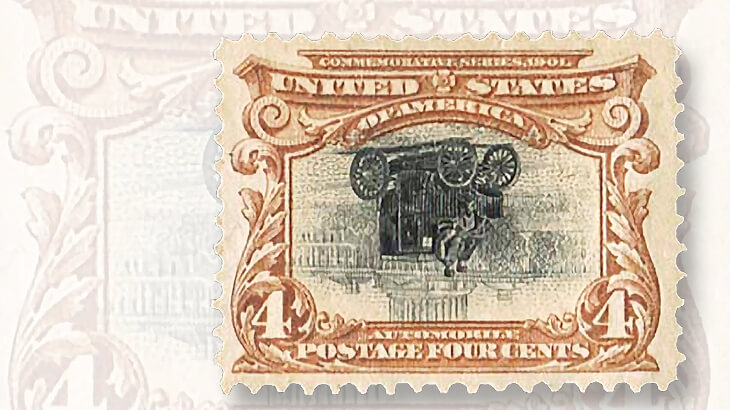 The highlight of Regency-Superior’s sale at Orcoexpo in Anaheim, Calif., in January was an inverted-center 4¢ Electric Automobile from the 1901 Pan-American issue. With original gum and no faults, the error sold for $33,600. 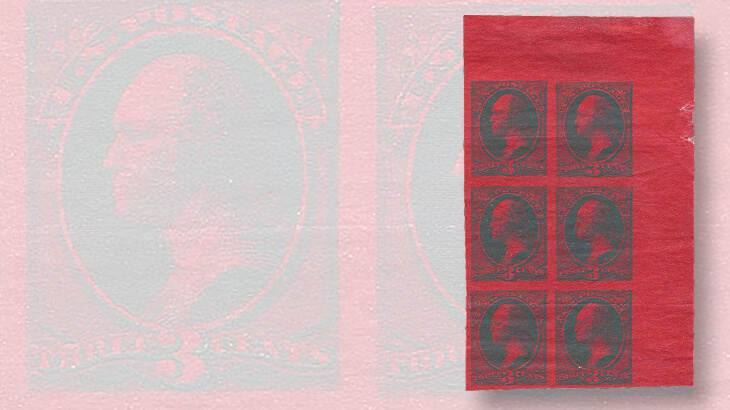 A probably unique essay based on a later 3¢ Washington stamp sold for $1,800 at Regency-Superior’s Internet auction in February. The margin block of six was printed on an experimental deep red paper. 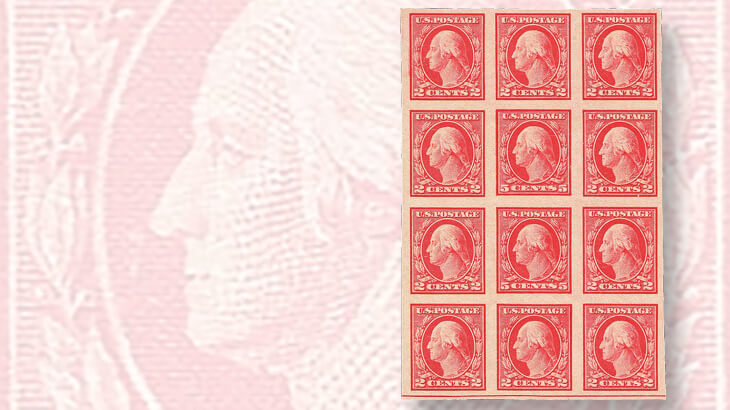 An imperforate, mint never-hinged double-error block of 12 of the United States 1917 2¢ Washington definitive stamp, with the middle two stamps mistakenly printed with a 5¢ denomination, sold for $30,000 at Regency-Superior’s Orcoexpo auction in January.
Previous
Next

Regency-Superior held a sale Jan. 9-10, in conjunction with the Orcoexpo stamp show near Anaheim, Calif., and an Internet-only auction on Feb. 15.

The top seller at Orcoexpo was an inverted-center 4¢ Electric Automobile from the 1901 Pan-American issue (Scott 296a), boasting full original gum, “exceptional” centering and no faults, something that cannot be said for all of the 200-plus examples of this rarity. The stamp sold for $33,600.

Another high seller was an imperforate, mint never-hinged double-error block of 12 of the 1917 Washington definitive stamp, in which the middle two stamps of the carmine-colored block mistakenly show a denomination of 5¢ instead of 2¢ (Scott 485).

This error arose when a workman preparing the printing plate accidentally used the 5¢ transfer roller to replace three of the impressions in a sheet of 2¢ stamps (a solo error occurs elsewhere in the sheet). The 5¢ stamp was regularly issued in blue.

The imperforate version of the double error in the Regency-Superior sale went for $30,000.

A bluish-paper variety of the 8¢ stamp in the Washington-Franklin series, featured on the front page of Linn’s Dec. 28, 2015, edition previewing the sale, was knocked down at its opening bid, bringing $21,600 with commission.

Regency-Superior’s Internet-only sale on Presidents’ Day was conducted with a somewhat novel feature: participants who had already placed an online bid on a given item by 7 p.m. were given an extra 15-minute window to raise their bids if they wanted. The auction did not close until 15 minutes had passed after the final bid.

The auction mostly comprised routine U.S. stamps, with some exceptional items sprinkled throughout. A used example of the common, imperforate 3¢ Washington dull red type I of 1855 (Scott 11) evidently caught the eye of more than one bidder.

Boasting a wide sheet margin with a partial imprint of the printing firm Toppan, Carpenter, Casilear & Co., Bank Note Engravers, the stamp was tied to a piece of an envelope by a lovely St. Anthony’s Falls, M.T. (Minnesota Territory), circular datestamp.

It was a prime example of the kind of unique item that gives a collection added dimension and elevates philately beyond the mere filling of album spaces and into the realm of history and human interest.

Appropriately, this stunner sold for $138, many times its $15 catalog value.

An essay based on a later 3¢ Washington stamp, consisting of a corner-margin block of six resembling the 1873 Continental Bank Note Company issue but printed on an experimental, deep red surface-colored paper (unlisted variety of Scott 158-E1), was described as likely being unique. It sold for $1,800.

Among revenues, a used, inverted-center example of the 1871 Third Issue 2¢ Washington (Scott R135b), canceled by a light manuscript marking applied right-side-up in relation to the portrait, went home with a new owner for $312.