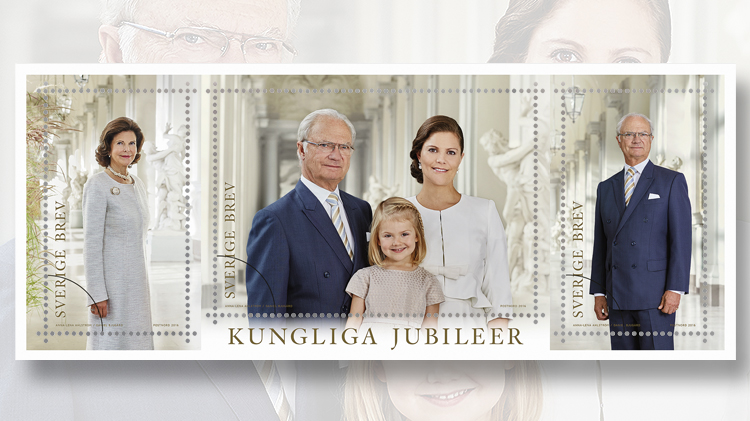 A souvenir sheet from Sweden commemorates the 70th birthday of King Carl Gustaf, the royal order of succession, and 40 years of Silvia as the queen. 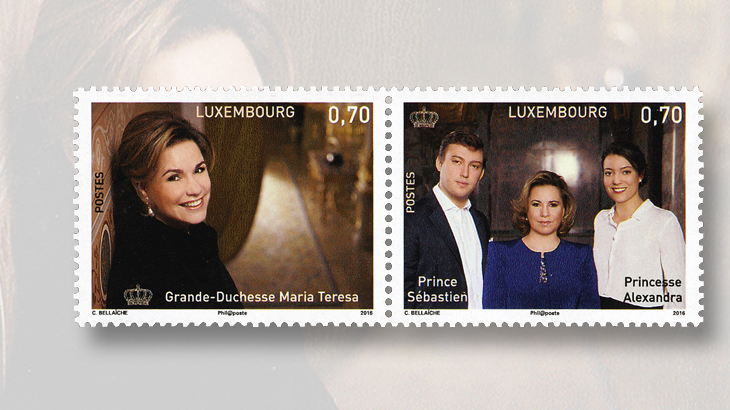 Luxembourg issued a se-tenant pair of stamps March 3 to celebrate the 60th birthday of Grand Duchess Maria Teresa. Her youngest children, Princess Alexandra and Prince Sebastien, also are pictured on one of the stamps. 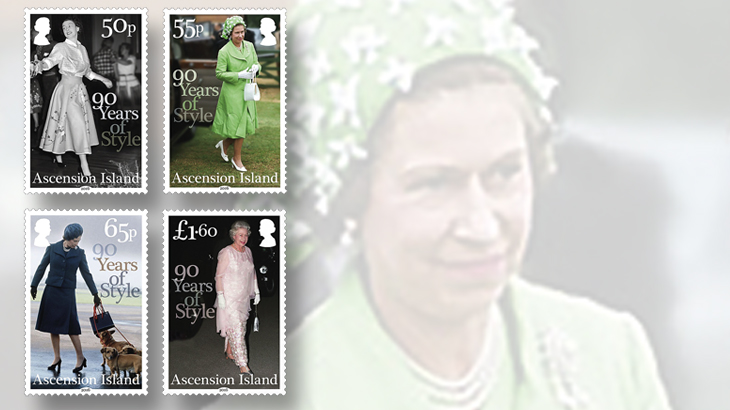 Ascension Island and other postal administrations are participating in an omnibus called 90 Years of Style for the 90th birthday of Queen Elizabeth. These four stamps picture her in 1951, 1973, 1974, and 1995, respectively. 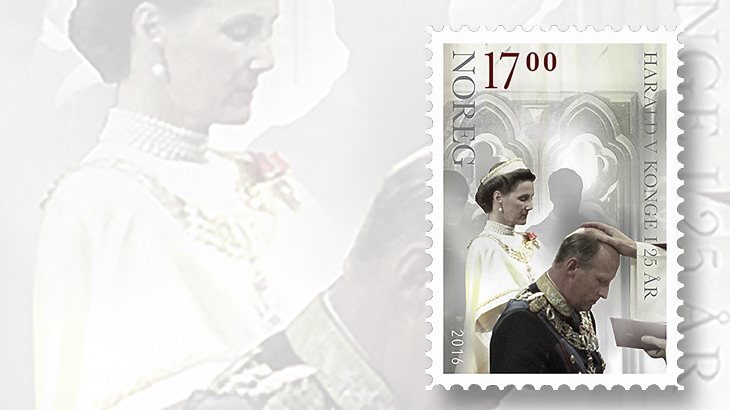 Norway’s new stamp commemorating 25 years of the reign of King Harald V depicts a scene from the June 23, 1991, consecration ceremony. 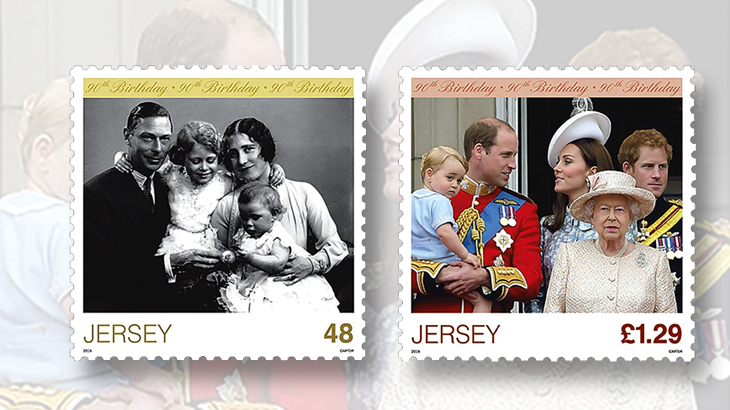 In celebration of the 90th birthday of Queen Elizabeth II, Jersey is issuing 10 stamps April 21 featuring photographs of the queen and her family. These two stamps show her as a princess at age 5 with her parents and sister, and in 2015 watching a parade with two of the younger generations of her family. 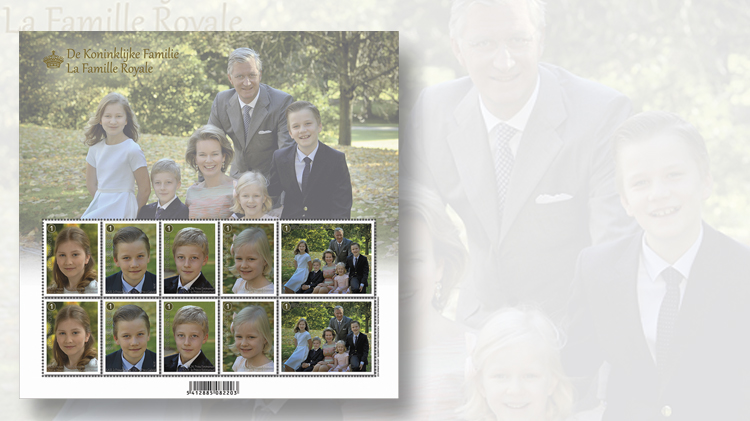 A pane of 10 stamps from Belgium shows photographs of the four children of King Philippe and Queen Mathilde and a portrait of the royal family.
Previous
Next

Ever since Great Britain pictured Queen Victoria on the world's first postage stamp issued in 1840, royalty has been a popular topic for postal commemoration. Several recent stamps honor European royalty.

The 17-krone stamp features the consecration of King Harald at Nidaros Cathedral, Trondheim, on June 23, 1991. Based on a photograph by Bjorn Sigurdson, the design shows the hand of Bishop Finn Wagle on the king’s head. Queen Sonja is standing behind the king.

The website of the Royal House of Norway, described the consecration ceremony as “a solemn, ecclesiastical blessing of the King in the performance of his royal duties. In more recent times the Queen has been consecrated as well.”

Jorn O. Jontvedt designed this commemorative stamp. Joh. Enschede of the Netherlands printed it by offset.

Maria Teresa was born in Cuba March 22, 1956, to Jose Antonio Mestre and Maria Teresa Batista y Falla de Mestre. The family left Cuba in 1959 for the United States, later moving to Spain and then to Switzerland.

Maria Teresa met Henri, then hereditary grand duke of Luxembourg, while studying at the University of Geneva. The couple married Feb. 14, 1981, and Henri ascended to the throne Oct. 7, 2000.

The couple have five children. The two youngest, Princess Alexandra (born Feb. 16, 1991) and Prince Sebastien (born April 16, 1992) are pictured with their mother on one of the two new 0.70 stamps.

The other stamp features a photograph of Grand Duchess Maria Teresa by herself.

Carole Bellaiche took the two photographs shown on the stamps. Philaposte of France printed the stamps se-tenant (side-by-side) in panes of 10.

The grand duchess is known for her humanitarian work, including serving as a UNESCO goodwill ambassador since 1997.

A pane of stamps from Belgium features its royal family, especially the children.

The fifth stamp depicts a family portrait of King Philippe, Queen Mathilde and their four children. The same photo is shown enlarged in the selvage of the pane.

Christian Lambiotte took all of the photographs on the grounds of the royal palace. Myriam Voz designed the stamp pane, and Belgium’s national printer printed it by offset.

Britt-Inger Hahne, head of stamps for PostNord (the joint postal administration of Sweden and Denmark), said: “This year King Carl Gustaf is celebrating his 70th birthday and Queen Silvia has been our Queen for 40 years. We are celebrating these occasions with a minisheet, where we will also see Crown Princess Victoria and Princess Estelle, who, together with the King, represent the order of succession.”

The three nondenominated domestic-rate stamps in the souvenir sheet reproduce photographs of the royal family taken by Anna-Lena Ahlstrom in the east vault at the royal palace in Stockholm.

Queen Silvia is featured on the stamp on the left side of the souvenir sheet.

The center stamp depicts the king; Crown Princess Victoria, the heir apparent; and Victoria’s oldest child, Princess Estelle (born Feb. 23, 2012), who is third in line to the throne.

Daniel Bjugard designed the souvenir sheet. It was printed by offset.

Most of these stamps show photographs of the queen taken throughout her life. For instance, Jersey is issuing a set of 10 stamps April 21 featuring photos of the queen and her family taken from the 1920s through 2015.

A 48-penny stamp pictures the young princesses Elizabeth (then age 5) and her sister Margaret (10 months) with their parents.

The £1.29 high denomination of the set shows the queen with two younger generations of the royal family: grandsons Harry and William; great-grandson George; and William’s wife and George’s mother Kate Middleton, the duchess of Cambridge. The group is standing on the balcony of Buckingham Palace, watching the Trooping the Colour parade.

The queen’s children, her husband Prince Philip, and even her pet corgis are depicted on other stamps in the set from Jersey.

Great Britain’s Royal Mail also is scheduled to issue stamps for the queen’s 90th birthday on April 21, but the designs have not been revealed.

Australia commemorated the royal birthday on two stamps issued April 5. While the $1 domestic-rate stamp shows a portrait of the queen, the $2.75 international-rate stamp pictures one of her brooches.

Comprised of 150 white and yellow diamonds, the brooch was presented to the queen in 1954 as a gift from the people and government of Australia.

The queen is seen wearing the Australian Golden Wattle diamond brooch in the photograph reproduced on the $1 stamp.

The £5 high denomination in the set pictures the queen on her coronation day. This image is shown in color, while the photographs on the other stamps are displayed in black and white.

A set of eight stamps issued Feb. 6 by the Isle of Man showcase the work of Arthur Edwards, who served as the royal photographer for The Sun newspaper for almost 40 years.

A presentation pack offered by the Isle of Man Post Office includes a card with information from Edwards explaining why he selected these photographs of the queen to appear on the stamps and where they were taken.

Styles of the queen

As the name 90 Years of Style suggests, the stamps focus on fashions the queen has worn over the decades. In announcing the series, Pobjoy Mint said: “To this day the Queen remains the centre of attention wherever she goes and is subject to critical assessment every time she appears in public. The pressure of such scrutiny must be phenomenal yet there has never been a wardrobe malfunction nor a fashion faux pas. Her impeccable style has ensured her place as an icon of fashion.”

Each postal administration will issue five stamps April 21, four of them in panes of 10 and one in a souvenir sheet.