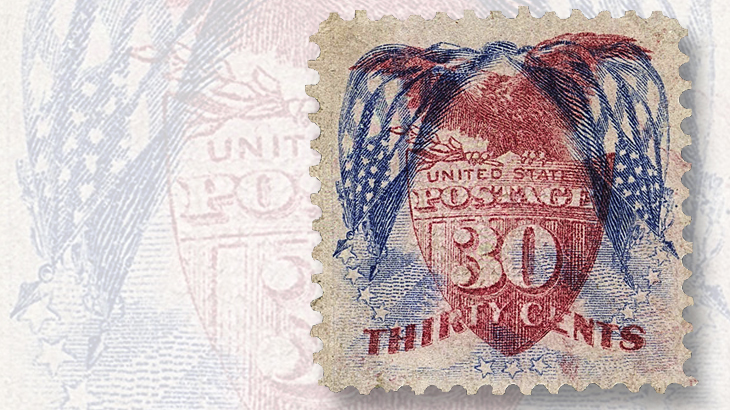 This unused and sound invert error of the 1869 30¢ Eagle, Shield, and Flags stamp will be auctioned April 7 by Robert A. Siegel Auction Galleries in New York City as part of the Hanover collection.

An unused example of one of America’s most highly prized stamp errors, the 1869 30¢ bicolor Shield, Eagle, and Flags stamp with the flags inverted (Scott 121b), will be offered at auction April 7 by Robert A. Siegel Auction Galleries.

The stamp is included in the sale of the Hanover collection of superb quality U.S. stamps, part one, the first of two consecutive auctions taking place at the New York City Siegel gallery. On April 8, the firm will offer the Rollin C. Huggins Jr. collection of U.S. Officials.

The Hanover collection presents a group of classics boasting remarkable condition attributes, many with graded certificates testifying that they fit in at the top of the existing reports for condition and grading.

In the catalog introduction, Siegel president Scott R. Trepel wrote, “In my experience, and knowing how easily a reputation for accuracy can be undermined by overstatement, I will say that the Hanover collection, judged purely for condition, is one of the top dozen of its kind in the annals of philately.”

The invert error of the 30¢ Shield, Eagle, and Flags stamp has been recorded by Siegel in the firm’s invaluable stamp census with seven unused stamps and 40 used stamps, making it considerably more rare than the beloved 1918 24¢ Jenny Invert airmail error, issued almost 50 years later in almost the same two colors.

Six of the seven unused 1869 30¢ inverts have no gum, while the seventh, sold by Siegel in 2013, has been examined and certified as genuine with “small part” original gum.

The stamp offered this time around is among the very best, described by Siegel as extremely fine and one of only two or three of the 30¢ errors that is clearly sound (one sound stamp was sold at auction in 1960 and hasn’t been seen since, and the other sound stamp is the example with small part gum from the 2013 sale).

This error, ex-Colonel Stillwell, is offered in the Siegel sale with a 2014 Philatelic Foundation certificate and listed with the $300,000 value for the no-gum stamp found in the 2016 Scott Specialized Catalogue of United States Stamps and Covers.

In this sale that is brimming with stamps in top condition, one also finds a used example of the 1851 1¢ blue Benjamin Franklin type I, position 7R1E (Scott 5) that fits that description.

Lightly canceled, the stamp is one of just two that have been graded XF Jumbo 90 by the stamp expertizing and grading service Professional Stamp Experts.

Once the center stamp in a strip of three on cover, this single stamp now has broad margins at left and right including large parts of the adjoining stamps, and is barely touching at the bottom, making “all of the type characteristics … clearly visible,” according to Siegel.

Before listing the Scott catalog value of $67,500 for a used stamp, Siegel quotes from the catalog, which states that “Values for No. 5 are for examples with margins touching or cutting slightly into the design, or for examples with four margins and minor faults. Very few examples with the design untouched exist, and these sell for much more than the values shown.”

For collectors of U.S. Official stamps, the Huggins collection provides opportunities to obtain these classics as singles and multiples, with outstanding examples of postal history, as well as essays and proofs, specimens (including the prized “SEPCIMEN” overprint errors), and much more.

The catalogs for both these sales can be downloaded from the Siegel website at siegelauctions.com, or can be browsed on the site as an e-catalog.