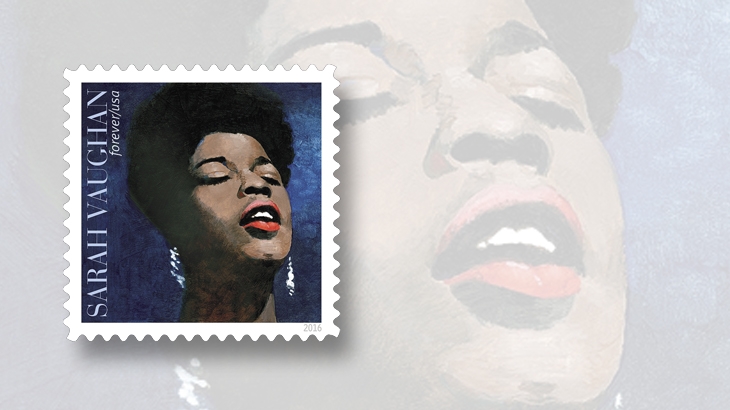 The Sarah Vaughan forever stamp will be issued March 29, honoring the popular vocalist in a pane of 16 stamps in the Music Icons series.

Admission to the Sarah Vaughan stamp first-day ceremony is open to the public, but a ticket is required to attend.

The ceremony tickets are free and can be obtained in person from the Newark Symphony Hall box office at 1030 Broad St. The box office is open Monday through Friday from 12 p.m. to 5 p.m., and Saturday from 11 a.m. to 3 p.m.

The ceremony will feature musical performances by Melba Moore, Carrie Jackson, the Mount Zion Baptist Church Choir, and the NJPAC Jazz for Teens Ensemble with Jazzmeia Horn, as well as a video tribute to Vaughan.

The Sarah Vaughan stamp features an oil painting by Bart Forbes of Vaughan in performance, based on a photograph by Hugh Bell (1927-2012).

Bell’s photo was featured on the cover of Vaughan’s 1955 Columbia Records album After Hours With Sarah Vaughan.

The singer’s name is printed up along the left edge of the stamp design, along with small lower case letters reading “forever/usa.”

The stamp will be issued in panes of 16 designed to resemble a 45rpm record, with an enlarged image of Forbes’ painting on the back side of the pane and a listing of some of Vaughan’s many hits.

Below the block of stamps is printed: “Sarah Vaughan (1924-1990) was one of America’s greatest singers, successful in both jazz and pop. Swooping from high to low and back again, her voice ranged over several octaves. Her talent for improvisation and skillful phrasing created a style all her own, which continues to influence some of today’s best singers and win her new generations of fans.”

The Postal Service has announced it is issuing 25 million Sarah Vaughan stamps, but only 200 uncut press sheets.

All of the 200 Sarah Vaughan press sheets being issued are processed with die cuts, according to information released by the Postal Service.

The USPS Stamp Fulfillment Services retail division has been accepting pre-orders for the Sarah Vaughan stamps and press sheets. The press sheet is identified as USPS item 586406.

A digital color first-day postmark, available on uncacheted envelopes sold by the Postal Service, will feature the singer’s name in blue letters and the image of a vocalist’s microphone.

After winning first prize by singing Body and Soul during amateur night at the Apollo Theater, the 18-year-old became a featured vocalist in a band led by Earl “Fatha” Hines that also included legendary jazz trumpeter Dizzy Gillespie.

Vaughan joined Billy Eckstine’s band in 1944 and embarked on a solo career the following year. Her 1946 recording of If You Could See Me Now has been inducted into the Grammy hall of fame. She had a hit in 1947 with her recording of Tenderly, and this pop success enlarged her audience because she also made jazz standards and show tunes her own with a flawless voice and extraordinary range.

When Vaughan died in 1990, singer Mel Torme was quoted as saying, “She had the single best vocal instrument of any singer working in the popular field.” Her many accolades included a Lifetime Achievement Grammy Award in 1989, and induction into the Jazz Academy’s Ertegun Hall of Fame in 2010.

Technical details and first-day cancel ordering information for the Sarah Vaughan forever stamp are listed below.

Standard ordering instructions apply. Collectors requesting first-day cancels are encouraged to purchase their own stamps and affix them to envelopes. The first-day cover envelopes should be addressed for return (a removable label may be used), and mailed in a larger envelope addressed to Sarah Vaughan Stamp, U.S. Postal Service, 2 Federal Square, Newark, NJ 07102. Requests for first-day cancels must be postmarked by May 29.

The Postal Service’s uncacheted first-day cover for the Sarah Vaughan stamp is item 586416 at 93¢.