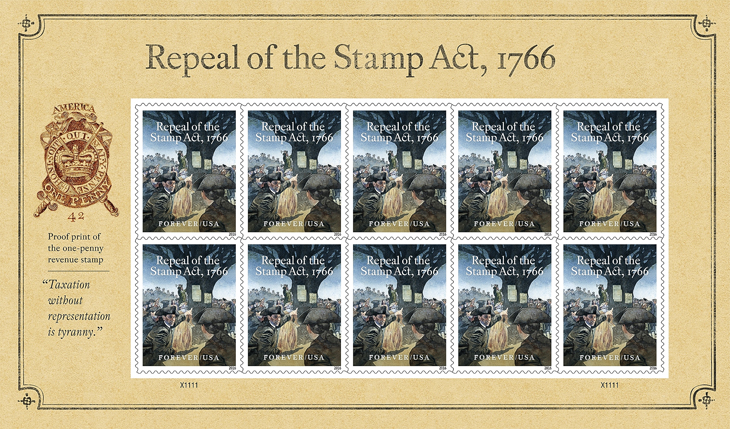 The nondenominated (47¢) forever stamp commemorating the 1766 repeal of the 1765 Stamp Act will be issued by the United States Postal Service in a pane of 10. 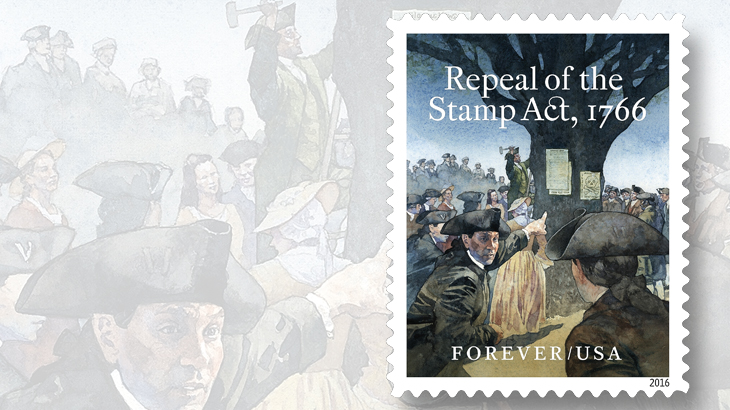 The stamp illustration by artist Greg Harlin shows a crowd of people gathered around a liberty tree, a popular rallying point for colonial protesters.
Previous
Next

A single nondenominated (47¢) forever stamp commemorating the 1766 repeal of the 1765 Stamp Act will be issued by the United States Postal Service in a pane of 10.

The new stamp marks the 250th anniversary of the repeal of the Stamp Act, described by the Postal Service as “British legislation that galvanized and united the American colonies and set them on a path toward revolution.”

The stamp’s first-day ceremony will be a rare Sunday event, taking place at 11 a.m. on May 29 during World Stamp Show-NY 2016 at the Javits Center in New York City. Admission is free to the show and the ceremony.

The stamp illustration by artist Greg Harlin shows a crowd of people gathered around a liberty tree, a popular rallying point for colonial protesters.

The colonists were angered by the Duties in American Colonies Act, enacted in 1765, which the British Parliament used to impose taxes on the colonists that would be documented by printed revenue stamps.

Taxes were levied on bills of mortgage, pamphlets, newspapers, almanacs, licenses, bills of sale, and numerous other documents.

One of the British stamps is represented in the front selvage of the new stamp pane with the image of a 1-penny revenue stamp proof.

The British revenues for use in America are among those listed under the heading Embossed Revenue Stamped Paper in the Scott Specialized Catalogue of United States Stamps and Covers.

Colonists protested the unpopular Act with the motto “No taxation without representation,” and dissent grew throughout the colonies in America.

The stamps were repealed in 1766, but the story was far from over, and continued efforts by the British government to exert control over the colonies led to the American Revolution 10 years later.

The Repeal of the Stamp Act, 1766, stamps are being issued in a relatively small quantity of 12 million, offset-printed by Banknote Corporation of America. The stamps were designed by USPS art director Antonio Alcala.

The Postal Service is also offering an uncut press sheet for the Repeal of the Stamp Act stamp, with 3,000 sheets printed containing 120 stamps (12 panes). All of the press sheets are being issued with die cuts.

Technical details and first-day cancel ordering information for the Repeal of the Stamp Act stamp are provided below.

Standard ordering instructions apply. Collectors requesting first-day cancels are encouraged to purchase their own stamps and affix them to envelopes. The first-day cover envelopes should be addressed for return (a removable label may be used), and mailed in a larger envelope addressed to Repeal of the Stamp Act Stamp, Special Events Coordinator, 380 W. 33rd St., New York, NY 10199-9998.

Requests for first-day cancels must be postmarked by July 29.

The Postal Service’s uncacheted first-day cover for the Repeal of the Stamp Act stamp is item 586716 at 91¢. USPS order numbers for stamps and FDCs also appear in Linn’s 2016 U.S. Stamp Program.