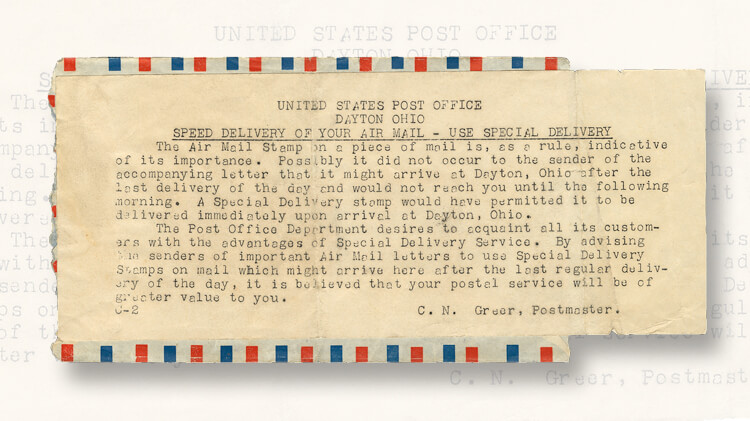 The paste-on message from the Dayton, Ohio, postmaster on this 1938 letter from El Salvador promotes the use of special delivery. 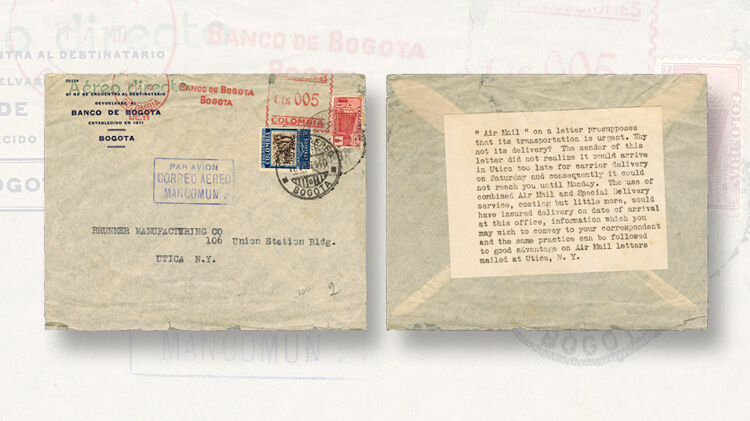 Shown back and front, this 1940 cover from Colombia bears a notice on the reverse from the Utica, N.Y., post office suggesting that lack of a special delivery stamp delayed delivery of the letter. 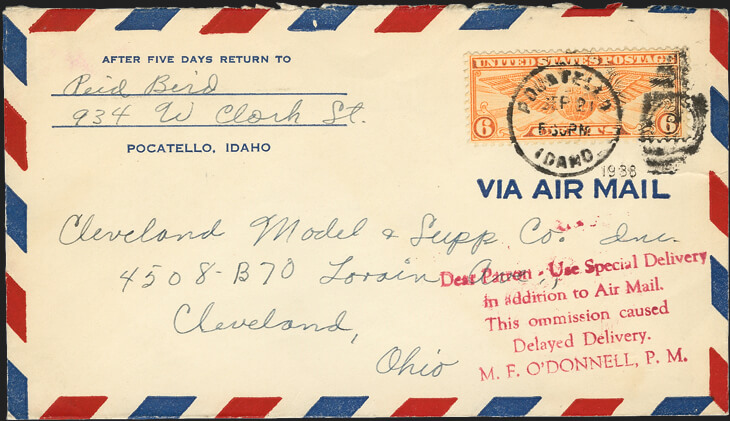 In 1936, the Cleveland, Ohio, postmaster caused this brief message to be put on airmail letters being delivered in Cleveland.
Previous
Next

Postal service messages on covers are an interesting area to collect, and it is a field full of surprises.

Routine examples of such messages advise of inability to deliver, explain why a cover might have been damaged or delayed in transit, or indicate why and how much postage due has been assessed.

There is, however, a special class of messages in which the postal people take the time and trouble to promote their services.

The three examples shown with this column are all from the same general era when the United States Post Office Department was trying to increase use of special delivery.

The most recent is a 1940 cover from Bogota, Colombia, to Utica, N.Y. The rather long message on the back reads:

“ ‘Air Mail’ on a letter presupposes that its transportation is urgent. Why not its delivery? The sender of this letter did not realize it would arrive in Utica too late for carrier delivery on Saturday and consequently it could not reach you until Monday. The use of combined Air Mail and Special Delivery service, costing but little more, would have insured delivery on date of arrival at this office, information which you may wish to convey to your correspondent and the same practice can be followed to good advantage on Air Mail letters mailed at Utica, N.Y.”

The second is a 1938 letter from El Salvador to Dayton, Ohio. The message stuck to the back is headed “Speed Delivery of your air mail — Use Special Delivery.” The message reads:

“The Air Mail Stamp on a piece of mail is, as a rule, indicative of its importance. Possibly it did not occur to the sender of the accompanying letter that it might arrive at Dayton, Ohio after the last delivery of the day and would not reach you until the following morning. A Special Delivery stamp would have permitted it to be delivered immediately upon arrival at Dayton, Ohio.

“The Post Office Department desires to acquaint all its customers with the advantages of Special Delivery Service. By advising the senders of important Air Mail letters to use Special Delivery Stamps on mail which might arrive here after the last regular delivery of the day, it is believed that your postal service will be of greater value to you.”

The third example is the short and sweet handstamp in red on a domestic 1936 airmail letter sent to Cleveland, Ohio. It says: “Dear Patron – Use Special Delivery in addition to Air Mail. This omission caused Delayed Delivery. M.E. O’Donnell, P.M.”

Special delivery service began in the United States in 1885, and immediately became a popular means of moving urgent mail. Starting as a domestic service available at only 555 post offices, within a year it had extended nationwide.

By the 1930s, a series of bilateral agreements with foreign governments allowed for reciprocal special delivery with prepayment using stamps of the originating country.

This greatly simplified a system that formerly had required that a U.S. special delivery stamp had to be used on international mail to the United States to guarantee that service.

Special delivery did meet a real need, but it was rendered obsolete by the introduction of Priority Mail and Express Mail in the 1970s.

Collecting covers: in period, proper use, single use and related terms