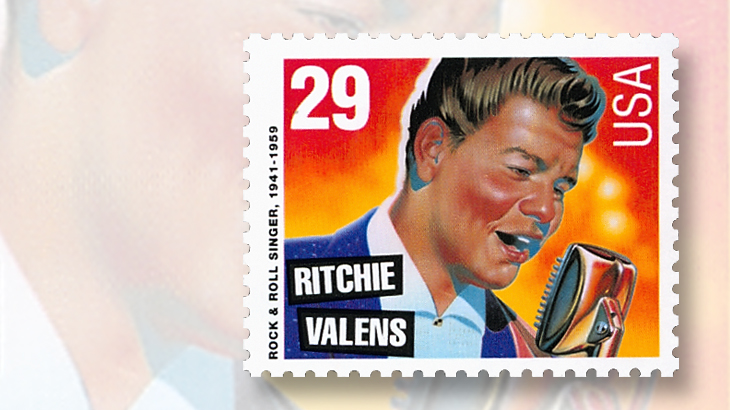 Singer and songwriter Ritchie Valens was born Richard Steven Valenzuela on May 13, 1941, in the predominantly Latino city of Pacoima, Calif.

He learned to play guitar at a young age and joined a group called the Silhouettes when he was 16. Within a few months, Valens had signed to a record contract and dropped out of school. After creating some demo recordings, Valens recorded his first songs with a full band, including Come On, Let’s Go. The success of that single led to another session that produced the hits Donna and La Bamba. The latter song broke new ground by blending rock rhythms with the Spanish-language lyrics and melody of a traditional folk song.

Valens began touring almost immediately as his records climbed the charts. He performed on Dick Clark’s television program American Bandstand, and in 1959 joined a tour dubbed the Winter Dance Party, which included Buddy Holly, Dion and the Belmonts, the Big Bopper (J.P. Richardson), and Frankie Sardo.

After a performance in Clear Lake, Iowa, on Feb. 2, 1959, Valens was aboard a small chartered plane on a night flight that was also carrying Holly, Richardson and pilot Roger Peterson. The plane crashed in poor weather and all aboard were killed. Valens was just 17 years old.

Valens’ life story was told in the 1987 film La Bamba starring Lou Diamond Phillips. Despite his brief career, Valens’ influence on later musicians earned him a spot in the Rock and Roll Hall of Fame in 2001.

Valens was honored on a 29¢ stamp in the 1993 Rock ‘n’ Roll and Rhythm & Blues set of the American Music commemorative series. Two versions of the stamp were issued (Scott 2727 and 2734).