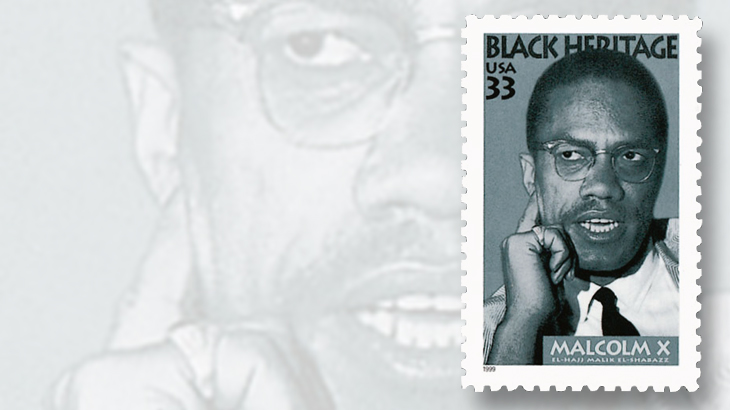 He was introduced to the teachings of Elijah Muhammad and joined the Nation of Islam in 1952, taking the name Malcom X to symbolize the African heritage lost by his slave ancestors.

“In the late 1950s Malcolm X emerged as a major spokesperson for African Americans,” the United States Postal Service stated in 1999. “He was both a brilliant scholar and a fiery orator whose persuasive and passionate views are still felt today.”

He founded the Organization of Afro-American Unity in 1964 in his search for solutions to the plight of race relations in the United States. At age 39, he was fatally shot at the Audubon Ballroom in New York on Feb. 21, 1965.

The 33¢ Black Heritage commemorative series stamp honoring Malcolm X was issued Jan. 20, 1999, in New York City. The stamp is inscribed with the name Malcolm X, and below it, the name El-Hajj Malik El-Shabazz, which Malcolm X adopted in 1964.

The 33¢ Malcolm X stamp is the 22nd issue in the Postal Service’s Black Heritage series (Scott 3273).